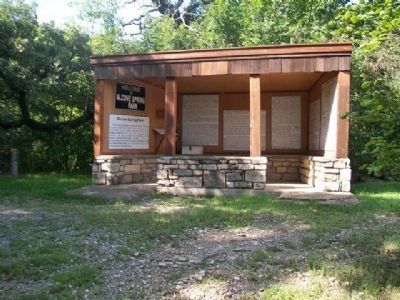 Alcove Spring Park consists of more than 200 acres of native prairie and timber land maintained for the preservation of this historic camping ground on the Oregon-California trail and for the enjoyment of our visitors. The park is owned and maintained by the Alcove Spring Preservation Society. Visitors are encouraged to take the short walk up to Alcove Spring and Naomi Pike Falls, and to follow the walking trails across the rest of the park area.

Alcove Spring became a favored camping and resting area for westward bound emigrants beginning in the early 19th century. One of the first known emigrant groups to cross the Blue River at Independence Crossing was the Bidwell-Bartelson party in 1841. A member of that party, Nancy Kelsey, is believed to be the first white woman to cross the Sierra Nevada Mountains. It is believed that famous missionaries Marcus and Narcissa Whitman stopped here on their way to Washington in the 1830's.

In 1842, John Charles Fremont passed through on his second expedition west. Fremont was accompanied 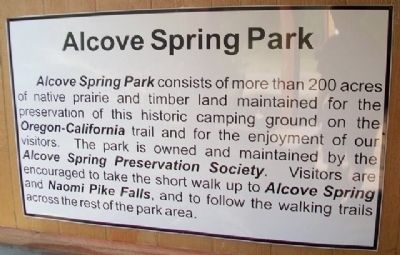 Click or scan to see
this page online
by famed frontiersman Kit Carson. Initials "JF", next to an arrow carved in a limestone outcropping, a few hundred yards above the Spring may be those of Fremont.

In 1843, westward migration began to explode, and over the next 25 years, more than ¼ million people headed west, many along the Oregon-California Trail, and passed through this area.

In May of 1846, the famous Donner-Reed party camped here for five days waiting for the flooding on the Big Blue River to subside. While here, Sarah Keyes, leader James Reed's mother-in-law, passed away and was buried here. While the exact location of the gravesite has been lost over time, it is believed to be a short distance west of the stone marker, placed by the Daughters of the American Revolution in her memory, just across the country road. The Donner-Reed party eventually built a raft to float wagons across the flooding Blue and continue their westward trek. After a number of other delays, they failed to beat a blizzard across the Sierra Nevada Mountains by one day. During the winter that followed, nearly half of the party perished from cold and malnutrition after being stranded near what is now know[n] as Donner Pass.

A member of the Donner-Reed party, Edwin Bryant, coined the name Alcove Spring. His 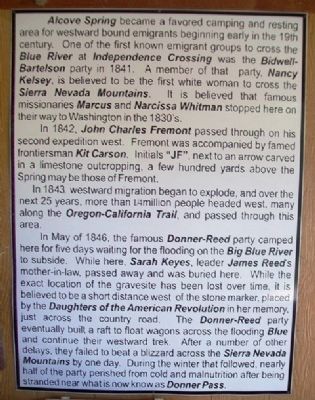 "About three-fourths of a mile from our camp we found a large spring of water, as cold and pure as if it had just been melted from ice. It gushed from a ledge rock, which composes the bank of the stream, and falling some ten feet, its waters are received into a basin fifteen feet in length, ten feet in breadth, and three or four feet in depth. A shelving rock projects over this basin, from which falls a beautiful cascade of water, some ten or twelve feet. The whole is buried in a variety of shrubbery of the richest verdure, and surrounded by small mound-shaped inequalities of the prairie. Altogether, it is one of the most romantic spots I've ever seen. So charmed were we with its beauties, that several hours unconsciously glided away in the enjoyment of its refreshing waters and seductive attractions. We named this the "Alcove Spring", and future travelers will find the name graven on the rocks, and on the trunks of the trees surrounding it."

Another member, George McKinstry, carved the name "Alcove Spring" into the rocks above the spring on May 30, 1846. Several other members of the party also left their names engraved, including James Reed. Some carvings have fallen into the creek bed and others have been lost over time, but a number of names carved by the pioneers remain in the limestone of the spring area. 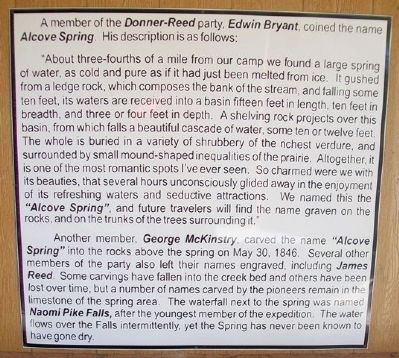 Photographed By William Fischer, Jr., September 1, 2014
4. Alcove Spring Park Marker
The waterfall next to the spring was named Naomi Pike Falls, after the youngest member of the expedition. The water flows over the Falls intermittently, yet the Spring has never been known to have gone dry.

In the time of the westward migration, this area was dominated by the tall grasses found on the meadows around the park. The three main grasses, Big Bluestem, Indiangrass, and Switchgrass are succulent and green in the spring before heading out 6-7 feet tall in the late summer. Dozens of varieties of wildflowers begin blooming in the early spring and continue through the summer. Deer, coyotes, quail, wild turkeys, and a variety of other birds and animals are commonly found here. The region was mostly devoid of trees except along the larger streams before the settlers arrived. During much of the crossing through this region the pioneers would have seen no trees at all, but miles of tall prairie grass. Soon after leaving this area the travelers transitioned to shorter prairie grasses to the north and west and eventually nearly desert conditions farther west.

Several travelers have been reported to have died and been buried nearby. A Mormon Cemetary [sic], somewhere on the property, contains of number of graves of cholera victims, but its location has been lost to time also.

The Alcove Spring property was privately 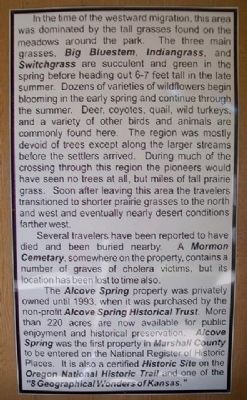 Photographed By William Fischer, Jr., September 1, 2014
5. Alcove Spring Park Marker
owned until 1993, when it was purchased by the non-profit Alcove Spring Historical Trust. More than 220 acres are now available for public enjoyment and historical preservation. Alcove Spring was the first property in Marshall County to be entered on the National Register of Historic Places. It is also a certified Historic Site on the Oregon National Historic Trail and one of the "8 Geographic Wonders of Kansas."

Visitors are encouraged to explore the walking trails on the property. Trails above the Spring area lead to the east side of the property near the railroad tracks and return through a sylvan area near the small stream below the kiosk, passing through Stella's Meadow - named in honor of longtime owner Stella Hammett. You can follow the trail up the hill north across the parking lot for a beautiful view of the Big Blue River valley and look across the valley to where the trail continued westward. Across the rock road is the monument erected by the Daughters of the American Revolution to honor Sarah Keyes. Just past the marker in the meadow, view wagon swales cared by the emigrants more than 150 years ago. A few hundred yards south of the parking lot and across the road is an overlook of a field where the Big Blue coursed in the 19th century. A faint trace of the old river channel 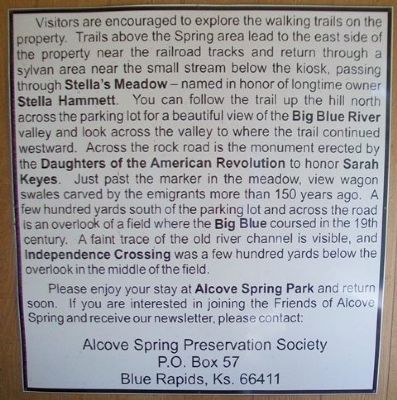 Photographed By William Fischer, Jr., September 1, 2014
6. Alcove Spring Park Marker
is visible, and Independence Crossing was a few hundred yards below the overlook in the middle of the field.

Please enjoy your stay at Alcove Spring Park and return soon. If you are interested in joining the Friends of Alcove Spring and receive our newsletter, please contact:

Topics and series. This historical marker is listed in these topic lists: Environment • Roads & Vehicles • Settlements & Settlers • Waterways & Vessels. In addition, it is included in the California Trail, and the Oregon Trail series lists. A significant historical year for this entry is 1841.

Location. 39° 44.973′ N, 96° 40.742′ W. Marker is near Blue Rapids, Kansas, in Marshall County. Markers are in the kiosk at the parking area of Alcove Spring Park, off East River Road (unpaved), about five miles north of Blue Rapids. Follow the signs from US Hwy 77. Touch for map. Marker is in this post office area: Blue Rapids KS 66411, United States of America. Touch for directions.

Other nearby markers. At least 8 other markers are within 5 miles of this marker, measured as the crow flies. Oregon Trail Memorial Garden (here, next to this marker); A Quiet and Restful Place (about 500 feet away, measured in a direct line); The 1840s American Dream 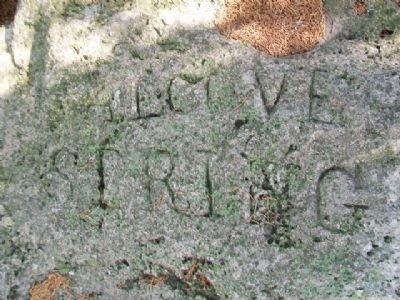 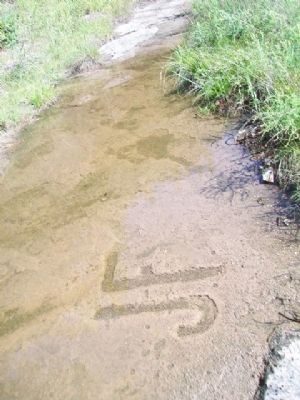 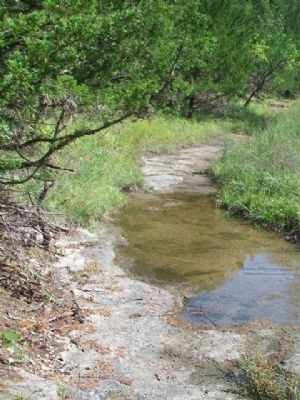 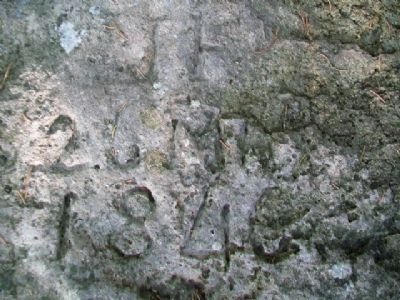 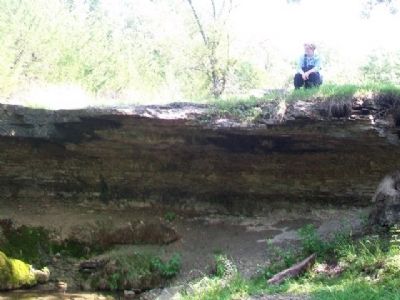 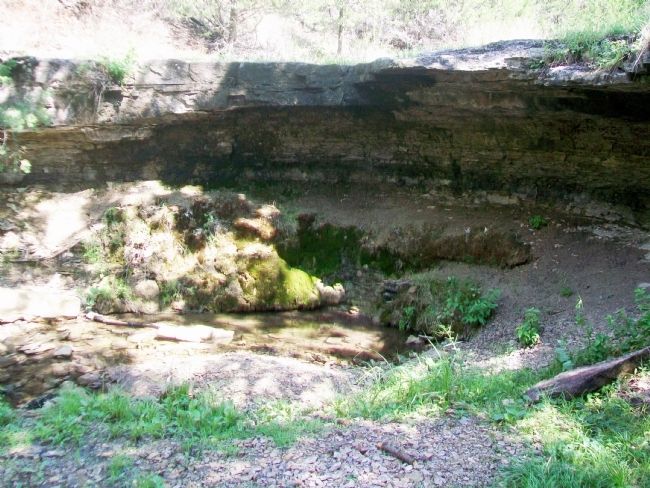