Battle of Round Mountain 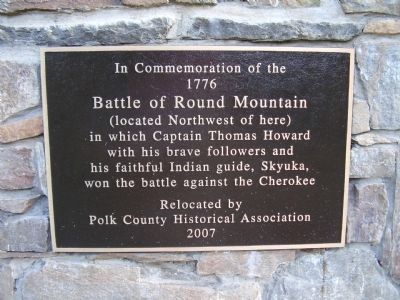 In Commemoration of the
1776
Battle of Round Mountain
(located Northwest of here) in which Captain Thomas Howard with his brave followers and and faithful Indian guide, Skyuka, won the battle against the Cherokee

Topics. This historical marker is listed in these topic lists: Notable Events • Wars, US Indian. A significant historical year for this entry is 1776. 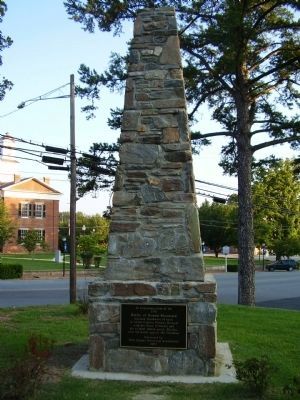 Photographed By Stanley and Terrie Howard, September 7, 2008
2. Battle of Round Mountain Marker

Click or scan to see
this page online
(within shouting distance of this marker); Polk County Bicentennial Memorial (about 300 feet away, measured in a direct line); The Brave Devoted Patriots (approx. 0.2 miles away); Tryon Mountain (approx. 2.3 miles away). Touch for a list and map of all markers in Columbus.

More about this marker. This is the second relocation of this monument. The Daughters of the American Revolution originally placed the monument, commemorating the Battle of Round Mountain, at Howard Gap in 1909 (coordinates currently unknown). The first relocation moved it to the side of Miller's Mountain, opposite Round Mountain, during construction of Interstate 26 in the late 1960s and 1970s at GPS Coordinates: N 35° 14.983 W 082° 16.406. Round Mountain is the hill immediately south of I-26 from these coordinates.

Regarding Battle of Round Mountain. Hello! I added a newspaper photo from 1977 of that re-dedication and some text from the accompanying article which gives some additional clues about the original marker! I also made a small correction to a typo (battel to battle) in the marker text, best! JMB

"Skyuka led Captain Howard and the militia to the gap between Miller's Mountain and Round Mountain, where they fought a decisive battle with the Cherokees that ended in victory for the patriots. This battle is referred to as the Battle of Round Mountain or the Battle of Warrior Mountain." (Submitted on September 11, 2008, by Kevin W. of Stafford, Virginia.)

Additional commentary.
1. Article about the 1977 dedication of the Battle of Round Mountain marker 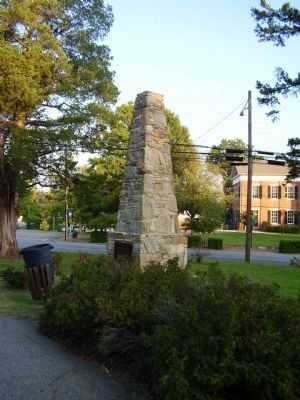 Photographed By Stanley and Terrie Howard, September 7, 2008
3. Battle of Round Mountain Marker
From the Times-News (Hendersonville, N.C.) from May 16, 1977: Dedication Ceremony Held for Thomas Howard Monument, by Licia Guat.

It was a little more than 200 years ago that Revolutionary War soldier, Capt. Thomas Howard and his faithful Indian guide Schuyuka (Skyuka) defeated the Cherokee nation at the Battle of Round Mountain.

Yesterday, the descendants of Thomas Howard and the South Carolina State Society, National Society Daughters of the American Revolution, gathered on the windy hillside at Howard Gap to commemorate Howard's bravery and to dedicate a monument honoring him.

The monument was restored last fall and erected on the east side of Interstate 26 by the North Carolina Department of Transportation.

The tall stone monument stands on a hill to the right of the old Howard Gap Road and is visible to motorists traveling on Interstate 26 between Columbus and Saluda.

The monument was originally erected in 1909 by Tryon Council No. 143, Junior Order of United American Mechanics, to honor Howard. The original monument had two granite placques [sic] that read: "To commemorate the battle of Round Mountain in which Capt. Thomas Howard and his brave followers with the faithful Indian guide Skyuka, defeated the Cherokee nation in 1776."

In 1968, when plans for Interstate 26 were in the making, the State Highway Commission 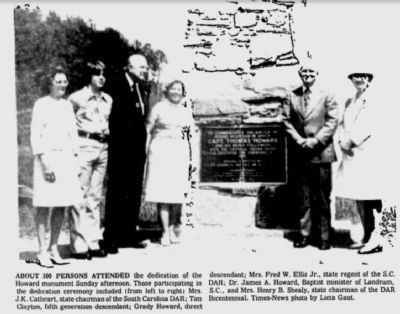 Licia Guat, The Times-News, Hendersonville, North Carolina, May 16, 1977
4. Dedication of Battle of Round Mountain Marker in 1977
The caption reads: About 100 persons attended the dedication of Howard monument Sunday afternoon. Those participating in the dedication ceremony included (from left to right) Mrs. J.K. Cathcart, state chairman of the South Carolina DAR; Tim Clayton, fifth generation descendant; Grady Howard, direct descendant; Mrs. Fred W. Ellis Jr., state regent of the S.C. DAR, and Mrs. Henry B. Shealy, state chairman of the DAR Bicentennial.
(now DOT) removed the monument from its original location on the Howard Gap Road and stored the stones in Columbus.

The descendants of the Howards of Upper South Carolina Organization purchased a new bronze tablet in 1967 to replace the old granite placques, which had been destroyed by vandals.

During the Revolutionary War, Capt. Howard, with a small command from the old Block House fort, was guided by Schuyuka through a gap in the mountains, now known as Howard Gap. The gap lies north of Round Mountain.

This enabled Howard to gain the rear of the Indians and their Tory allies, who were encamped in the gap to the south of Round Mountain, known as Big Warrior. Howard and his force defeated the enemy, killing a number of them. Today, rock-covered mounds mark where the Indians buried their dead on the battlefield.