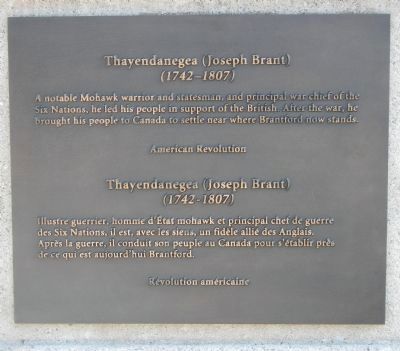 English:
A notable Mohawk warrior and statesman, and principal war chief of the Six Nations, he led his people in support of the British. After the war, he brought his people to Canada to settle near where Brantford now stands.

Topics. This historical marker is listed in these topic lists: Native Americans • War, US Revolutionary.

Other nearby markers. At least 8 other markers are within walking distance of this marker. Lieutenant Colonel Charles-Michel d’Irumberry de Salaberry, CB (a few steps from this marker); Sappers’ Bridge 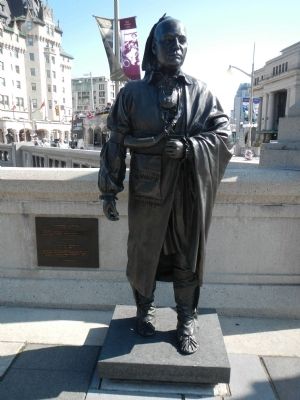 More about this marker. This marker is located at the Valiants Memorial near the National War Memoial

Also see . . .  Thayendanegea - Dictionary of Canadian Biography. Brant was a noble figure who dedicated his whole life to the advancement of his people and who struggled to maintain their freedom and sovereignty. His major failure was his inability to understand the nature of British imperialism and to comprehend the fact that the British would not permit two sovereignties to exist in Upper Canada. (Submitted on May 16, 2015, by Barry Swackhamer of Brentwood, California.) 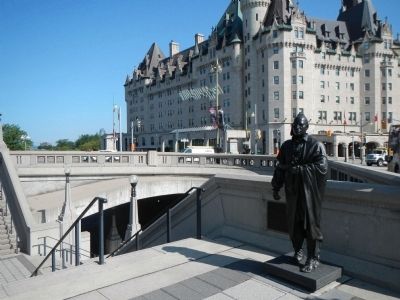 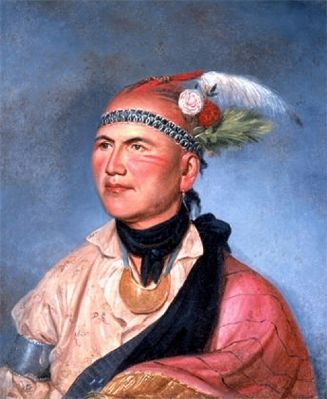 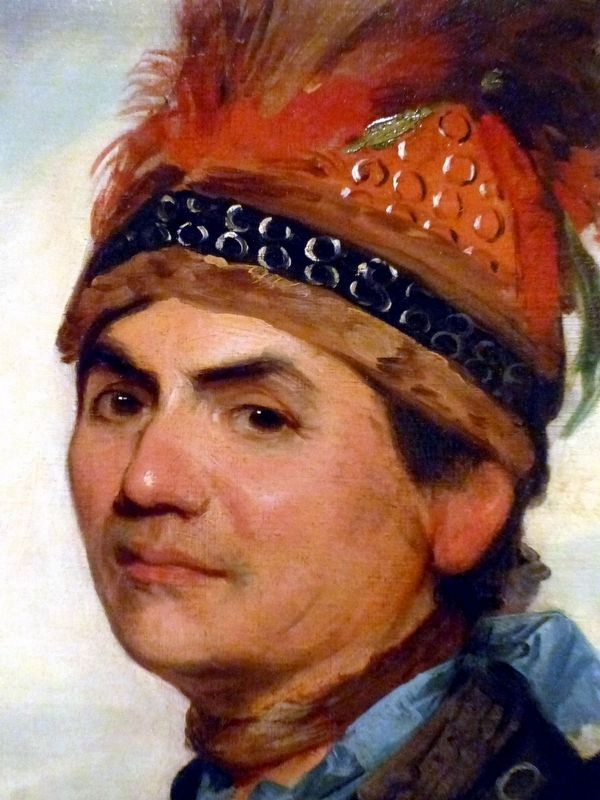 “Convinced that victory for the American colonists meant disaster for Native people, the Mohawk warrior Thayendanegea (also known as Joseph Brant) Jed loyalist troops in a number of devastating campaigns against rebel forces during the American Revolutionary War. At the war's conclusion, Brant journeyed to England to remind George III of his promise to compensate the Iroquois Confederacy for their military service and forfeited land. Brant's old friend Hugh Percy, the Duke of Northumberland, who had fought beside him in America, commissioned this imposing likeness from the American artist Gilbert Stuart, who was then based in London. In the portrait, Brant is shown wearing two gifts from the king: a crescent-shaped salver plate (known as a gorget) and a peace medal bearing the monarch’s profile. Brant's diplomatic efforts resulted in the award of 675,000 acres on the Grand River in Ontario, Canada, where he settled more than 1,800 Native American and white Loyalists.” – National Portrait Gallery
Credits. This page was last revised on March 19, 2018. It was originally submitted on May 16, 2015, by Barry Swackhamer of Brentwood, California. This page has been viewed 319 times since then and 4 times this year. Photos:   1, 2, 3, 4. submitted on May 16, 2015, by Barry Swackhamer of Brentwood, California.   5. submitted on December 24, 2017, by Allen C. Browne of Silver Spring, Maryland. • Andrew Ruppenstein was the editor who published this page.
Share This Page.