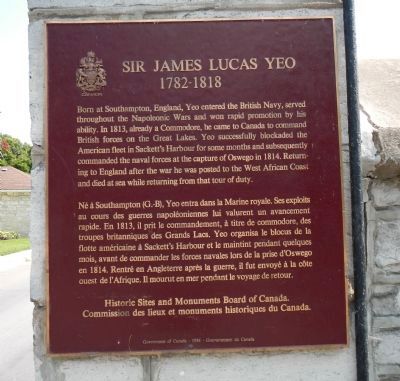 English:
Born at Southampton, England, Yeo entered the British Navy, served throughout the Napoleonic Wars and won rapid promotion by his ability. In 1813, already a Commodore, he came to Canada to command British forces on the Great Lakes. Yeo successfully blockaded the American fleet in Sackett's Harbour for some months and subsequently commanded the naval forces at the capture of Oswego in 1814. Returning to England after the war he was posted to the West African Coast and died at sea while returning from that tour of duty. 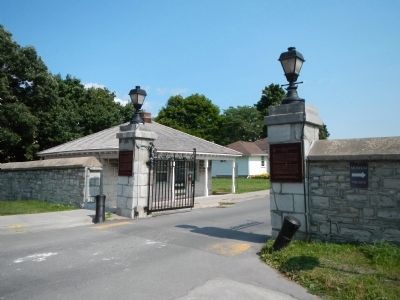 More about this marker. This marker is on the right-hand gate post at the Valour Drive entrance to the Royal Military College of Canada.

Also see . . .
1. Sir James Lucas Yeo - The Yeo Family History. On March 19, 1813, Yeo was appointed commodore and commander-in-chief on the lakes of Canada. He would discover that in the Canadas, his 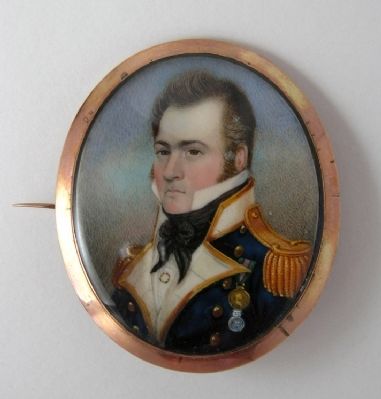 By Barry Swackhamer, December 24, 2009
3. Sir James Lucas Yeo minature
instinct for daring initiatives had to be disciplined in the interests of an imperious necessity: maintenance of control over Lake Ontario, the crucial link between the arsenal and dockyard at Kingston, Upper Canada, and the British force on the Niagara peninsula. (Submitted on May 23, 2015, by Barry Swackhamer of Brentwood, California.)

2. James Lucas Yeo - Wikipedia. In 1812, he commanded the frigate HMS Southampton, then stationed in the Bahamas. He captured the pirate ship Heureuse Réunion at the Action of 3 February 1812 and the American brig USS Vixen in November 1812, but shortly afterwards Southampton and Vixen were wrecked in the Crooked Island passage, although no lives were lost. As was customary in the case of the loss of a ship from any cause, Yeo was court martialled ... (Submitted on May 23, 2015, by Barry Swackhamer of Brentwood, California.)