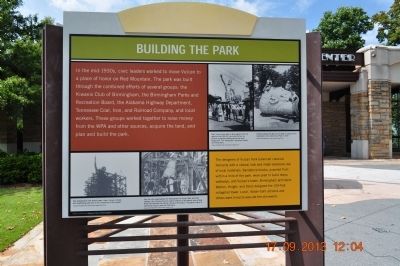 Side 1 - Building the Park

In the mid-1930’s, civic leaders worked to move Vulcan to a place of honor on Red Mountain. The park was built through the combined efforts of several groups: the Kiwanis Club of Birmingham, the Birmingham Parks and Recreation Board, the Alabama Highway Department, Tennessee Coal, Iron and Railroad Company, and local workers. These groups worked together to raise money from the WPA and other sources, acquire the land, and plan and build the park.

The designers of Vulcan Park balanced classical formality with a natural look and made extensive use of local materials. Sandstone blocks, quarried from within a mile of the park, were used to build steps, walkways, and Vulcan’s tower. Birmingham architects Warren, Knight, and Davis designed the 124-foot octagonal tower. Local, Italian-born artisans and others were hired to execute the stonework.

[Marker photo caption No. 1]: Site preparations took several years. Here, Vulcan is shown with scaffolding just prior to the completion of the project. Courtesy of Birmingham, Public Library Archives Catalog #616.2 32B 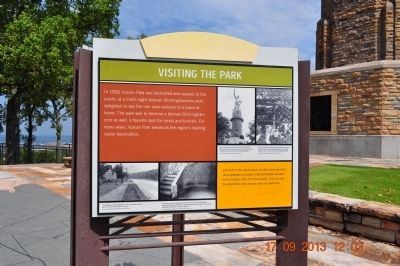 By Sandra Hughes, September 17, 2013
2. Visiting the Park
photo caption No. 2]: Tom Joy, who spearheaded the development of Vulcan Park, and Fred Jackson, who championed the original creation of the statue, were among those who attended the official rising of the statue. They gave a tug on a ceremonial rope to raise the first piece. Courtesy of Birmingham Public Library Archives Catalog #31.88

[Marker photo caption No. 3]: After Vulcan came back to Birmingham for his debut at the 1904 St. Louis World’s Fair, he became a popular meeting spot at the local fairgrounds. This “temporary” placement lasted over thirty years. Courtesy of Birmingham Public Library Archives, Catalog #31.91

[Marker photo caption No. 4]: Children explore the giant as he waits in pieces for his installation at the new Vulcan Park in 1937. Courtesy of Birmingham Public Library Archives Catalog 37.98

Side 2 - Visiting the Park

In 1939, Vulcan Park was dedicated and opened to the public at a multi-night festival. Birminghamians were delighted to see the iron man restored to a place of honor. The park was to become a beloved Birmingham icon as well, a favorite spot for locals and tourists. For many years, Vulcan Park served as the region’s leading visitor destination. 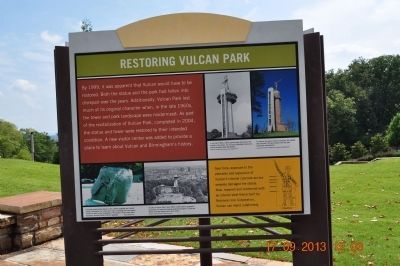 By Sandra Hughes, September 17, 2013
3. Restoring Vulcan Park
steps, ornamental gates donated by the Kiwanis Club, and the cascade. Then, as now, the observation deck was an open-air experience.

[Marker photo caption No.2:] The interior of the original tower base was faced in black-and-white Sylacauga marble and featured ornate plasterwork. An exhibit in the base showcased Alabama’s mineral resources. Courtesy of Birmingham Historical Society to support the Vulcan’s restoration 1999

[Marker photo caption No.4:] Vulcan served as a beacon and landmark for anyone traveling in and around Birmingham. He could be seen for miles- even from planes flying overhead. Courtesy of Birmingham Public Library Archives Catalog 37.98

By 1999, it was apparent that Vulcan would have to be restored. Both the statue and the park had fallen into disrepair 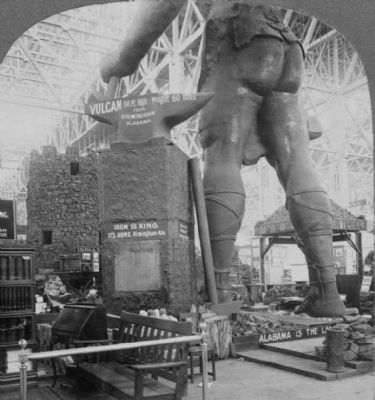 By Keystone View Company, circa 1905
4. At the Feet of Old Vulcan - Palace of Mines and Metallurgy...
Image is the right half of a stereograph, and is provided courtesy of the Library of Congress.
over the years. Additionally, Vulcan Park lost much of its original character when, in the late 1960s, the tower and park landscape were modernized. As part of the revitalization of Vulcan Park, completed in 2004, the statue and tower were restored to their intended condition. A new visitor center was added to provide a place to learn about Vulcan and Birmingham’s history.

Over time, exposure to the elements and expansion of Vulcan’s internal concrete anchor severely damaged the statue. Now, repaired and reinforced with an interior steel frame built by Robinson Iron Corporation, Vulcan can stand indefinitely.

[Marker photo caption No.1:] Concrete poured inside Vulcan in the 1930s expanded and caused cracks. Eventually, iron strips were used to bandage the most severe cracks, as seen in this photograph of the statue’s torso, taken after engineers removed Vulcan from his pedestal. Photo by BillyBrown.com

[Marker photo caption No.3:] In the late 1960s, marble panels were attached to the outside of the tower. An enclosed observation deck and exterior 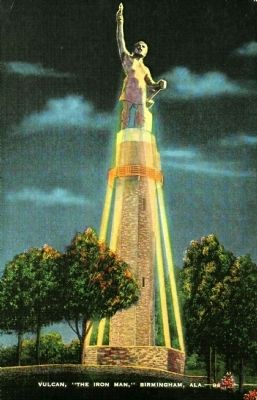 By E.C. Cropp and Company, circa 1935
5. Vulcan
"Vulcan", largest iron man in the world and second largest statue in America, is 53 feet tall and mounted on a 120-foot pedestal atop Red Mountain overlooking Birmingham. It typifies the natural resources of the district, the only place in the world where coal, iron, and limestone, the three essentials for making steel, are found together in large deposits.
elevator were also added. Courtesy of Birmingham Library Catalog #43.76

Erected by Kiwanis Club of Birmingham.

Location. 33° 29.5′ N, 86° 47.745′ W. Marker is in Birmingham, Alabama, in Jefferson County. Marker can be reached from Valley View Drive west of Richard Arrington Jr Boulevard South. Located in front of the Vulcan Museum. Touch for map. Marker is at or near this postal address: 1701 Valley View Drive, Birmingham AL 35209, United States of America. Touch for directions. 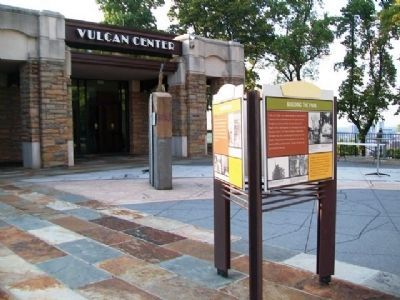