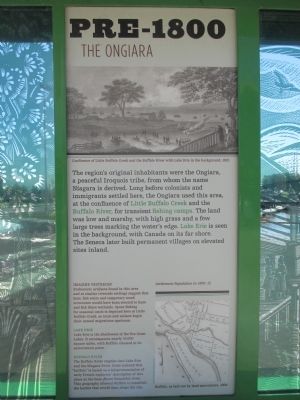 Pre-1800 The Ongiara
Confluence of Little Buffalo Creek and the Buffalo River with Lake Erie in the background, 1815.
The region's original inhabitants were the Ongiara, a peaceful Iroquois tribe, from whom the name Niagara is derived. Long before colonists and immigrants settled here, the Ongiara used this area, at the confluence of Little Buffalo Creek and the Buffalo River, for transient fishing camps. The land was low and marshy, with high grass and a few large trees marking the water's edge. Lake Erie is seen in the background, with Canada on its far shore. The Seneca later built permanent villages on elevated sites inland.

Imagine Yesterday. Settlement population in 1800: 12. Prehistoric artifacts found in this area and at similar riverside settings suggest that huts, fish weirs and temporary wood structures would have been erected to hunt and fish these wetlands. Spear-fishing for seasonal catch is depicted here at Little Buffalo Creek, as trout and salmon begin their annual migrations upstream.

Lake Erie. Lake Erie is the shallowest of the five Great Lakes. It encompasses nearly 10,000 square 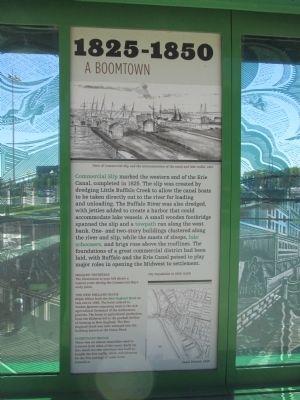 Buffalo River. The Buffalo River empties into Lake Erie and the Niagara River. Some contend that "Buffalo" is based on a mispronunciation of early French explorers' description of this place as beau fleuve (beautiful river). This geography allowed Buffalo to establish the harbor that would then shape the city.
Buffalo, as laid out by land speculators, 1804.

View of Commercial Slip and the interconnection of the canal and lake traffic, 1827.
Commercial Slip marked the western end of the Erie Canal, completed in 1825. The slip was created by dredging Little Buffalo Creek to allow the canal boats to be taken directly out to the river for loading and unloading. The Buffalo River was also dredged, with jetties added to create a harbor that could accomodate lake vessels. A small wooden footbridge spanned the slip and a towpath ran along the west bank. One- and two-story buildings clustered along the river and slip, while the masts of sloops, lake schooners, and brigs rose above the rooflines. the foundations of a great commercial district has been laid, with Buffalo and the Erie Canal poised to play major roles in opening the Midwest to settlement.

Imagine Yesterday. City Population in 1830: 8,668
The illustration to your left shows a typical scene 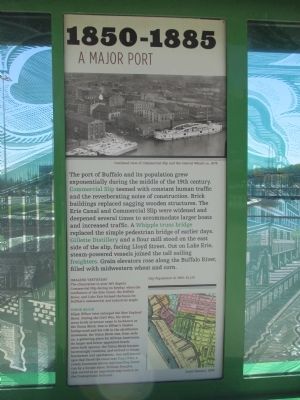 Pedestrian Bridge. There was an almost immediate need to traverse both sides of the canal. Early on, this small wooden structure was built to handle the foot traffic, while still allowing for the free passage of canal boats beneath it.
Canal District, 1849.

1850-1885 A Major Port.
Overhead view of Commercial Slip and the Central Wharf, ca. 1875.
The port of Buffalo and its population grew exponentially during the middle of the 19th century. Commercial Slip teemed with constant human traffic and the reverberating noise of construction. Brick buildings replaced sagging wooden structures. The Erie Canal and Commercial Slip were widened and deepened several times to accommodate larger boats and increased traffic. A Whipple truss bridge replaced the simple pedestrian bridge of earlier days. Gillette Distillery and a flour mill stood on the east side of the slip, facing Llyod Street. Out on Lake Erie, steam-powered vessels 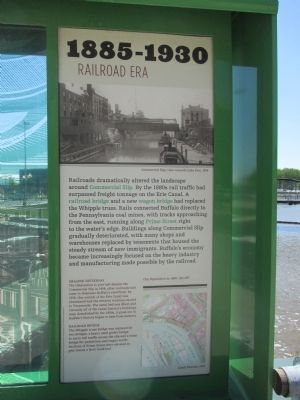 Imagine Yesterday. City Poopulation in 1860: 81,129 . The illustration to your left depicts Commercial Slip during its heyday, when the confluence of the Erie Canal, the Buffalo River and Lake Erie formed the basis for Buffalo's commercial and industrial might.

Union Block. Elijah Effner later enlarged the New England Hotel. During the Civil War, the three-story brick structure came to be known as the Union Block. Due to Effner's Quaker background and his role in the abolitionist movement, the Union Block was, from early on, a gathering place for African Americans. As larger and better-appointed hotels were built uptown, the Union Block became increasingly rundownm and evolved to house businesses and apartments. One well-known spot that faced the canal was Dug's Dive, a rowdy basement saloon and boarding house run by a former slave, William Douglas, that served as an important way-station on the Underground Railroad.
Canal District, 1885.

1885-1930 Railroad Era.
Commercial Slip, view towards Lake Erie, 1914.
Railroads dramatically altered the landscape around Commercial Slip. By the 1880s rail traffic had surpassed freight tonnage on the Erie Canal. A railroad bridge and a new wagon bridge has replaced the Whipple 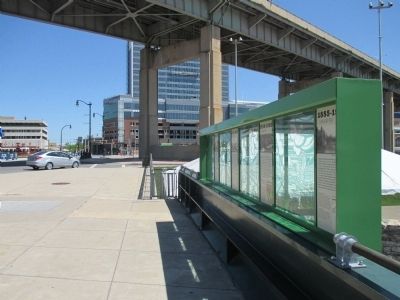 By Anton Schwarzmueller, June 3, 2015
5. Eastward
truss. Rails connected Buffalo directly to the Pennsylvania coal mines, wth tracks approaching from the east, running along Prime Street right to the water's edge. Buildings along Commercial Slip gradually deteriorated, with many shops and warehouses replaced by tenements that housed the steady stream of new immigrants. Buffalo's economy became increasingly focused on the heavy industry and manufacturing made possible by the railroad.

Imagine Yesterday. City Population in 1900: 352,387
The illustration to your left depicts the Commercial Slip in 1914, after railroads had come to dominate Buffalo's riverfront. By 1918, this section of the Erie Canal was abandoned and the western terminus moved to Tonawanda. The canal bed was filled, and virtually all of the Canal district's buildings were demolished by the 1950s. A great era in Buffalo's history began to fade from memory.

Railroad Bridge. The Whipple truss bridge was replaced by two bridges, a heavy steel girder bridge to carry rail traffic across the slip and a truss bridge for pedestrian and wagon traffic. Sections of Prime Street were elevated to give trains a level track-bed.
Canal Distrct, 1915. Buffalo and Erie County Historical Society.

Topics and series. This historical marker is listed in these topic lists: Abolition & Underground RR • 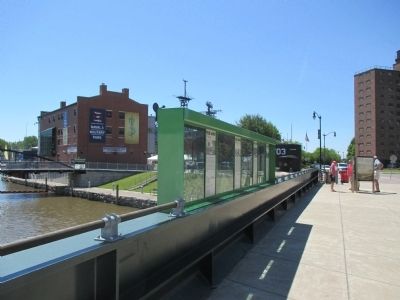 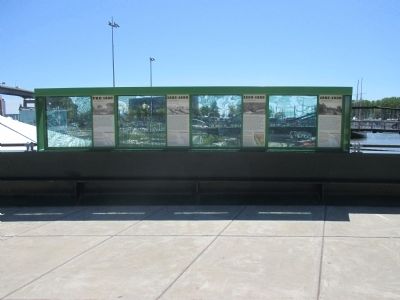