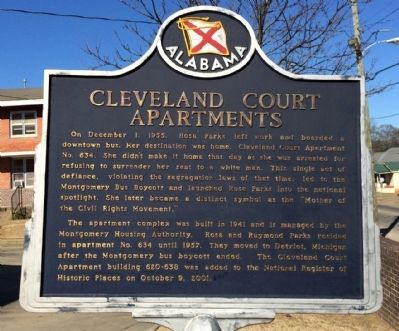 On December 1, 1955, Rosa Parks left work and boarded a downtown bus. Her destination was home, Cleveland Court Apartment No. 634. She didn't make it home that day as she was arrested for refusing to surrender her seat to a white man. This single act of defiance, violating the segregation laws of that time, led to the Montgomery Bus Boycott and launched Rosa Parks into the national spotlight. She later became a distinct symbol as the "Mother of the Civil Rights Movement."

The apartment complex was built in 1941 and is managed by the Montgomery Housing Authority. Rosa and Raymond Parks resided in apartment No. 634 until 1957. They moved to Detroit, Michigan after the Montgomery bus boycott ended. The Cleveland Court Apartment building 620-638 was added to the National Register of Historic Places on October 9, 2001.

Erected by The Alabama Historical Association.

Topics. This historical marker is listed in these topic lists: African Americans • Civil Rights. A significant historical month for this entry is October 1951. 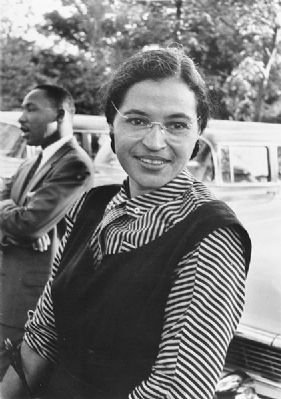