In the Miery Swamp 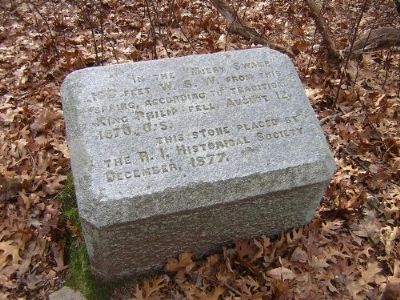 Photographed By Wikipedia's Swampyank, October 15, 2007
1. In the Miery Swamp Marker
Inscription.
In the Miery Swamp. King Philip Fell. In the 'Miery Swamp,' 100 feet W.S.W. from this spring, according to tradition, King Philip fell, August 12, 1676, O.S. This stone placed by the R.I. Historical Society. December, 1877. . This historical marker was erected in 1877 by Rhode Island Historical Society. It is in Bristol in Bristol County Rhode Island

Topics. This historical marker is listed in these topic lists: Colonial Era • Native Americans • Settlements & Settlers. A significant historical year for this entry is 1676.

Location. 41° 40.327′ N, 71° 14.67′ W. Marker is in Bristol, Rhode Island, in Bristol County. Marker can be reached from Tower Street (at milepost 0.7), 0.2 miles south of Tower Street. Head east on Tower Street from the intersection of Tower Street and Metacom Avenue (RI 136). After about 0.73 miles, Tower Street turns northeast. Ignore this turn and continue straight (east) approx 150 feet to where road (now unnamed) turns south. Go south about 700 feet to the end of this road, which is at the beginning of a private driveway. This point is the beginning of a trail; walk south on the trail for about 100 feet; the marker stone is approx. 50 feet 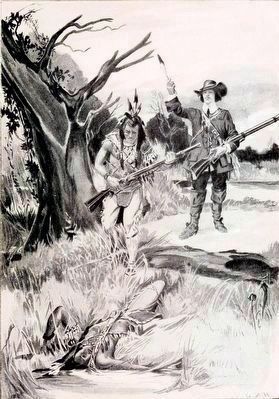 Click or scan to see
this page online
west on a side trail. Touch for map. Marker is in this post office area: Bristol RI 02809, United States of America. Touch for directions.

More about this marker. King Philip (Metacom) was the second son of Massasoit, the Wampanoag/Pokanoket tribal leader who according to English sources, prevented the failure of Plymouth Colony and the almost certain starvation that the Pilgrims faced during the earliest years of the colony's establishment.

Agreements between Massasoit and the leaders of Plymouth Colony set the Anglo-American foundation for relations with Indian tribes codified in Section 8 of the United States Constitution.

King Philip's War firmly established the mustering of militia in response to threats, and military relations and policy between the Colonies/United States and the many indigenous peoples and nations of the United States. The early Indian wars were serious life and death struggles for all sides of the conflict. Source accounts and the literature of these grim struggles describe brutal acts by all players.

Contemporary members of the Wampanoag/Pokanoket people live in Massachusetts and Rhode Island today.

5. Wampanoag people. Wikipedia entry:
Wôpanâak in the Wampanoag language; alternate spellings Wompanoag or Wampanig) are a Native American nation which currently consists of five tribes. In 1600 the Wampanoag lived in southeastern Massachusetts 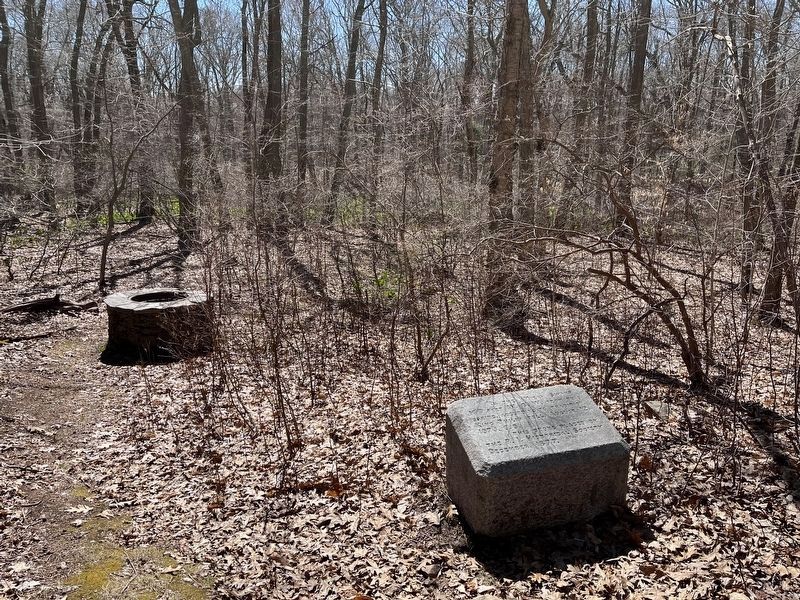 Photographed By Ralph Cahoon
3. In the Miery Swamp Marker
and Rhode Island, as well as within a territory that encompassed current day Martha's Vineyard and, Nantucket. Their population numbered about 12,000. (Submitted on November 6, 2010.)

8. Herring Pond Wampanoag Tribe - Our History. Tribe website entry:
We are members of the Wampanoag Nation, along with a few other tribes in the area. Our homelands range from the Plymouth (Plymouth Colony) areas to the upper parts of Cape Cod (Bourne, Sandwich and Plymouth). We have been here for thousands of years. We have fished these waters, cultivated these lands and raised our children here. We have been known over the years by many names...Pondville, Manomet, Bournedale, Praying Indians, and Comassakumkanit on old English maps. But we are presently known today as the Herring Pond Wampanoag Tribe. (Submitted on November 6, 2010.)

9. Massasoit. Wikipedia entry:
Father of King Philip, Massasoit Sachem or Ousamequin (c.1581 - 1661) was the sachem, or leader, of the Pokanoket, and "Massasoit" of the Wampanoag Confederacy. The term Massasoit means Great Sachem. (Submitted on November 6, 2010.)

Additional keywords. Metacom;Metacomet;Pometacom;King Philips War;Metacom's Rebellion;Metacom's War;swampyank;Thanksgiving;pilgrim;plimouth colony;plymouth colony
Credits. This page was last revised on April 17, 2022. It was originally submitted on October 31, 2010. This page has been viewed 6,961 times since then and 71 times this year. Last updated on July 27, 2015, by Richard Flint of Golden, Colorado. Photos:   1. submitted on October 31, 2010.   2. submitted on November 14, 2015, by Allen C. Browne of Silver Spring, Maryland.   3. submitted on April 14, 2022, by Ralph Cahoon of Barnstable, Massachusetts. • Bill Pfingsten was the editor who published this page.
Share this page.