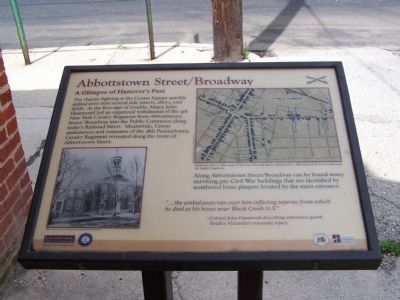 A Glimpse of Hanover's Past
The chaotic fighting at the Center Square quickly spilled over onto several side streets, alleys, and fields. At the first sign of trouble, Major John Hammond led an organized withdrawal of the 5th New York Cavalry Regiment from Abbottstown Street/Broadway into the Public Commons along today's Railroad Street. Meanwhile, Union ambulances and remnants of the 18th Pennsylvania Cavalry Regiment retreated along the rout of Abbottstown Street.

Along Abbottstown Street/Broadway can be found many surviving pre-Civil War buildings that are identified by numbered brass plaques located by the main entrance.

"...the ambulances ran over him inflicting injuries from which he died at his home near Black Creek, N.Y."
-Colonel John Hammond describing ambulance guard Bradley Alexander's traumatic injury.

Topics and series. This historical marker is listed in this topic list: War, US Civil. In addition, it is included in the Pennsylvania, Battle of Hanover Walking Tour series list. 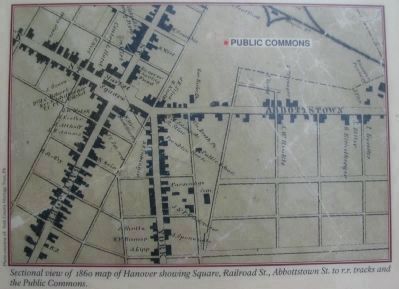 Click or scan to see
this page online
W. Marker is in Hanover, Pennsylvania, in York County. Marker is on Broadway (Pennsylvania Route 194) near School Avenue, on the right when traveling north. Across from Emmanuel Reformed Church. Touch for map. Marker is in this post office area: Hanover PA 17331, United States of America. Touch for directions.

More about this marker. On the lower left is a photo of the Former Emmanuel Reformed Church as it looked in 1863. On the right is a Sectional view of 1860 map of Hanover showing Square, Railroad St., Abbottstown St. to r.r. tracks and the Public Commons. 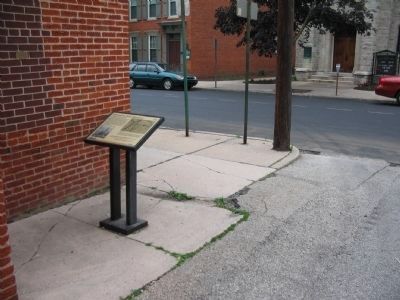 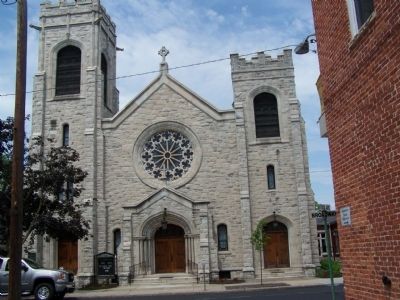 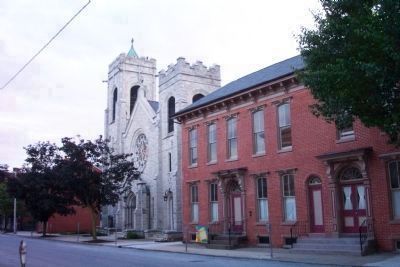 Photographed By Henry T. McLin, June 9, 2003
5. Abbottstown Street/Broadway Marker
Looking South. View of 120 Broadway, 124 Broadway (Emmanuel United Church of Christ), and 130 and 132 Broadway. The current church located on the footprint of both the parsonage (the building left of the church) and the church building shown on the marker. 130 and 132 Broadway were standing at the time of the civil war as was 120 Broadway which is not shown the marker but is seen to the left of the current church. The houses at 130 and 132 are now offices and classrooms of Emmanuel UCC. 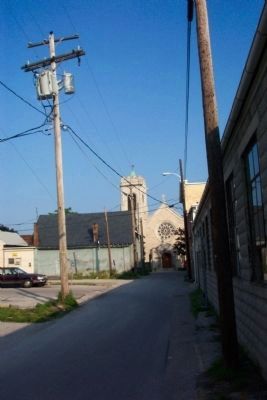 Photographed By Henry T. McLin, July 6, 2003
6. Emmanuel United Church of Christ looking west from School Avenue
The church building and parsonage to the left of the church shown on the marker were torn down for the current church building shown here in 1904. The church standing at the time of the Civil War was dedicated on May 25, 1856, according to Gibson's 1860 History of York County. 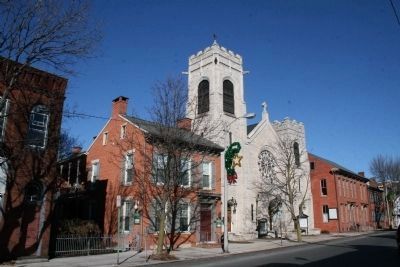 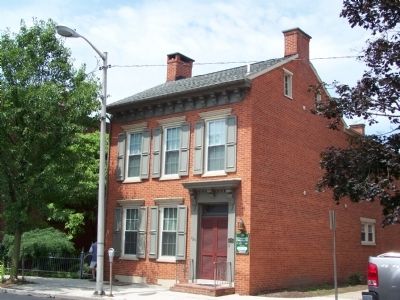 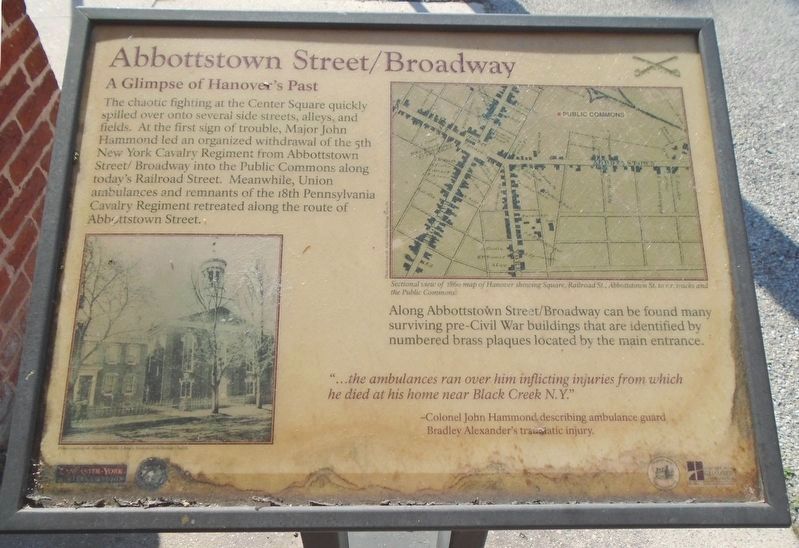