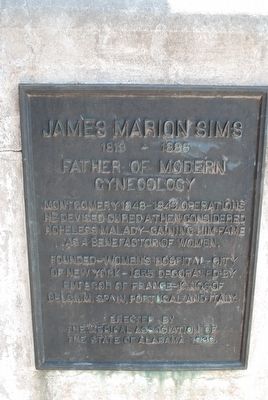 Photographed By Brandon Fletcher, July 8, 2011
1. James Marion Sims Marker
Inscription.
James Marion Sims. , Montgomery 1848-1849 Operations he devised cured a then considered hopeless malady, gaining him fame as a benefactor of women., Founded, Women's Hospital, City of New York, -1855. Decorated by Emperor of France, Kings of Belgium, Spain, Portugal and Italy. . This historical marker was erected in 1939 by Medical Association of the State of Alabama. It is in Montgomery in Montgomery County Alabama

Montgomery 1848-1849 Operations he devised cured a then considered hopeless malady—gaining him fame as a benefactor of women.

Founded—Women's Hospital—City of New York—-1855. Decorated by Emperor of France—Kings of Belgium, Spain, Portugal and Italy.

Erected 1939 by Medical Association of the State of Alabama.

Location. 32° 22.645′ N, 86° 18.055′ W. Marker is in Montgomery, Alabama, in Montgomery County. Marker can be reached from the intersection of South Bainbridge Street and Dexter Avenue, on the left when traveling south. Located on the grounds of the Alabama State Capitol. Touch for map. Marker is at or near this postal address: South Bainbridge Street, Montgomery AL 36131, United States of America. Touch for directions. 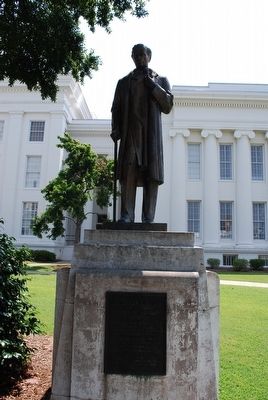 Additional commentary.
1. Similar statue in New York City moved to cemetery.
A similar statue of the controversial Dr. J. Marion Sims, formerly located for years in New York's Central Park, has been moved to his grave site in Brooklyn. A New York City committee made the decision to move the statue in February of 2018 after many years of requests to do so.

In Dr. Sim's quest for an effective treatment for vesicovaginal fistula, a serious vaginal complication that causes great pain, resorted to using enslaved black women for his experiments.

It is alleged that Dr Sims performed surgeries on his subjects without anesthesia. He argued that the operations were not painful enough to warrant any form of anesthesia. Sims further reasoned that “black people did not feel as much pain as white people”, and therefore didn‘t require anesthesia during surgery. Many women died at the hands of the man who some people now regard as “the father of modern gynecology”.
— Submitted February 27, 2018, by Mark Hilton of Montgomery, Alabama.
Credits. This page was last revised on February 27, 2018. It was originally submitted on August 15, 2015, by Brandon Fletcher of Chattanooga, Tennessee. This page has been viewed 450 times since then and 32 times this year. Photos:   1, 2. submitted on August 15, 2015, by Brandon Fletcher of Chattanooga, Tennessee. • Bernard Fisher was the editor who published this page.
Share this page.