Port of the Genesee, New York 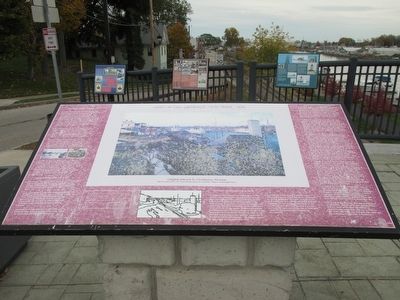 Port of the Genesee, New York. Original artwork by Christopher Blossom. Oil on Canvas 34" x 60" Commissioned by the law firm of Harris Beach and Wilcox.

The Story of the Painting
In 1990, the law firm of Harris Beach and Wilcox commissioned marine artist Christopher Blossom to do a painting of the Port of Rochester (Charlotte) as it appeared in the 1800's. The importance of this port is intertwined with the history of the City of Rochester. Through extensive research, Blossom was able to depict the Port as it looked in 1856. Blossom compiled data from many diverse sources in order to authentically depict buildings and ships that were actually here. In this painting, the artist was able to capture a snapshot of that "moment in time."
The original artwork was unveiled in 1992 and today it hangs in the library of Harris Beach and Wilcox. The painting was commissioned in recognition of the founding of the law firm by Edward Harris, who was admitted to practice in 1856. It also exemplifies the Harris family's historic ties to the New York Central Railroad.
Blossom began with an ambrotype made by Rochester photographer, E.T. 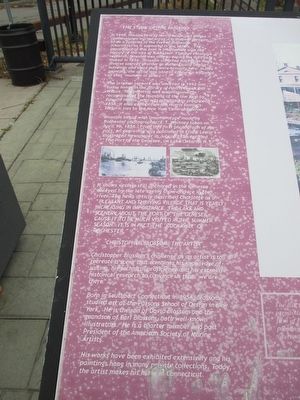 By Anton Schwarzmueller, October 31, 2015
2. Left
Whitney taken on April 19, 1856. From this first photograph of the port, an engraving was published in Frank Leslie's Illustrated Newspaper in July of 1856 entitled "The Port of the Genesee, on Lake Ontario, N.Y."
It shows vessels still anchored in the Genesee delayed by the late spring thaw and ice in the river. The news article described Charlotte as a "Pleasant and thriving village that is yearly increasing in importance. The lake and scenery about the Port of the Genesee cause it to be much visited in the summer season. It is in fact the 'Rockaway' of Rochester."
Christopher Blossom, The Artist
Christopher Blossom's challenge as an artist is to recreate a scene that combines his knowledge of sailing, his technical proficiency and his extensive historical research to convince us that "we are there".
Born in Southport Connecticut in 1956, Blossom studied art at the Parsons School of Design in New York. He is the son of David Blossom and the grandson of Earl Blossom, both well-known illustrators. He is a charter member and past President of the American Society of Marine Artists.
His works have been exhibited extensively and his paintings hang in many private collections. Today, the artist makes his home in Connecticut. 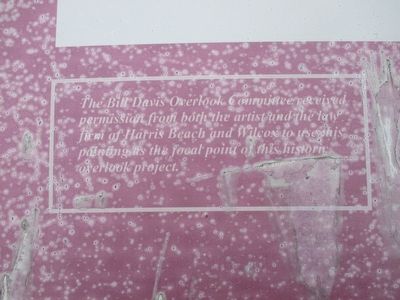 By Anton Schwarzmueller, October 31, 2015
3. Bottom Left
this painting as the focal point of this historic overlok project.

The Port of the Genesee was a busy place in the 1850's. Steam boats and schooners arrived and departed daily, bringing wheat from Canada that was stored in grain elevators and taken to the mills upriver at the Falls. In 1856, Rochester mills purchased over 3000 bushels of wheat at the price of $1.65 to $1.75 per bushel. Holden's warehouse and grain elevator (7)was located on Holden Street, now called Stutson Street. On the top floor of the elevator was Barney's meat market, connected to Holden Street by a footbridge. The Stutson Street Bridge would not be built until 1917.
The Stutson House (1)was a 3-story hotel located at the top of the hill. It was destroyed by fire on December 12, 1895. Further north on River Street is a commercial block of brick buildings (3)that had just been built at the corner of Latta and River housing a grocery, a dry goods store and offices for an insurance agent and forwarding and commission merchants.

Across River Street was the passenger and freight depot (5) for the New York Central Railroad. Train service to Charlotte began on May 11, 1853. Train schedules coincided with the arrival and departure of steamboats between Charlotte and Rochester. The fare was 18¢. The depot shown in the painting burned down on March 26, 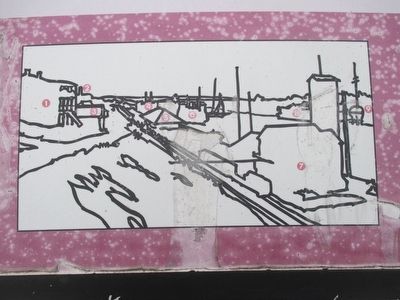 By Anton Schwarzmueller, October 31, 2015
4. Locating Numbers on Outline of Painting
Center bottom.
1902. A new one was built at the same site and still stands today.
Originally known as "Water Street," the road along the waterfront became known as "River Street" in 1815. North of the brick block are freight yards and the old stone lighthouse (2)that would be replaced by a two-story brick structure in 1863. The lighthouse grounds have been restored and now house a museum operated by the Charlotte Genesee Lighthouse Historical Society.
In addition to the port's commercial activity, Charlotte was becoming a great recreational area, especially in the warmer weather. By the 1860's, it was already a popular place for visitors to stay for the entire summer season or enjoy a boat excursion for the day. Steamboat service between Coburg and Charlotte started in 1834 and some steamers could carry as many as 700 passengers per trip. Anchored just north of the train station is the MAPLE LEAF (6)owned by the Lake Ontario Steamboat Company of Rochester. She maintained a Canadian registry and ran between Charlotte and Toronto. In 1862, the ship was sold and chartered for troop transport during the Civil War. On April 1, 1864, she struck a mine and sank near Jacksonville, Florida.
Tied up on the east bank at Captain Hosea Rogers' shipyard is the steamer NORTHERNER, undergoing seasonal repairs (8). Owned by the Ontario and St. Lawrence Steamboat Company, it was one of the first steamboats 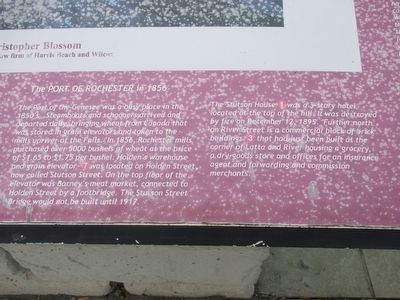 By Anton Schwarzmueller, October 31, 2015
5. Bottom Right
on the lake to have luxurious furnishings in her upper-deck cabins. The ship would see action in the Civil War and later returned to passenger service on the Chesapeake Bay. Also in Rogers' shipyard is the schooner JOSEPH COCHRANE (9)whose launch has been delayed by a late winter. She was the first ship to be launched at the port with her masts already installed.
Closest to the lake is the (4)ONTARIO built in 1847 at Clayton, N.Y. This steamer ran the "United States Main Line" with stops at Hamilton, Lewiston, Charlotte, Sacket's Harbor, Kingston and Ogdensburg. Behind the ONTARIO are a number of small merchant schooners that had been built in Charlotte and at Braddock's Bay.
The name of the Port was changed to the "Port of Charlotte" around 1870 and remained that way for many years after the Village of Charlotte was annexed by the city in 1916. In the 1930's the name was changed once again and the port became the "Port of Rochester." 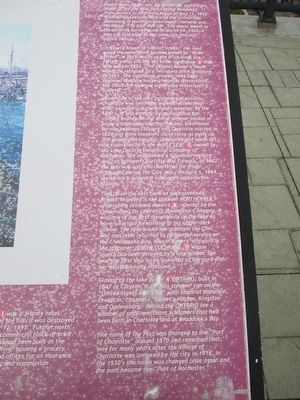 By Anton Schwarzmueller, October 31, 2015
6. Right
when traveling east on Stutson Street. Touch for map. Marker is in this post office area: Rochester NY 14612, United States of America. Touch for directions. 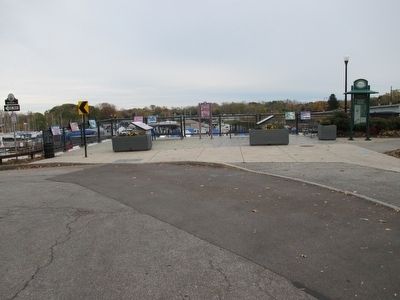 By Anton Schwarzmueller, October 31, 2015
7. Foot of Stutson Street
Eastward. Of the two largest markers tilted mostly skyward, this is the left one. 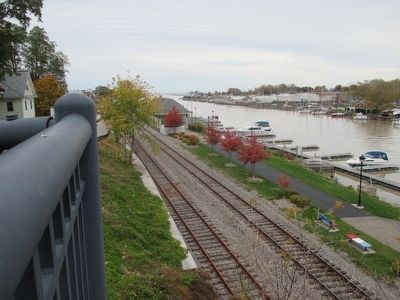