Camp of the Army of the Republic of Texas 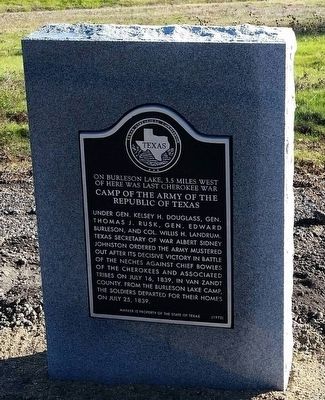 On Burleson Lake, 3.5 miles west of here was last Cherokee War Camp of the Army of the Republic of Texas

Under Gen. Kelsey H. Douglass, Gen. Thomas J. Rusk, Gen. Edward Burleson, and Col. Willis H. Landrum. Texas Secretary of War Albert Sidney Johnston ordered the army mustered out after its decisive victory in Battle of the Neches against Chief Bowles of the Cherokees and associated tribes on July 16, 1839, in Van Zandt County. From the Burleson Lake Camp, the soldiers departed for their homes on July 25, 1839.
Marker is property of the State of Texas

Topics. This historical marker is listed in these topic lists: Native Americans • Settlements & Settlers • Wars, US Indian. A significant historical date for this entry is July 25, 1839.

Photographed By Sam Hopkins, February 3, 2016
2. Camp of the Army of the Republic of Texas Marker

Click or scan to see
this page online
when traveling north on Mineola Highway. Touch for map. Marker is in this post office area: Lindale TX 75771, United States of America. Touch for directions.

More about this marker. This marker was stolen several years ago, and a replacement marker was rededicated on February 3, 2016

Regarding Camp of the Army of the Republic of Texas. There is a 1936 Texas Centennial Marker commemorating this camp on private property at Burleson Lake that is not accessible.