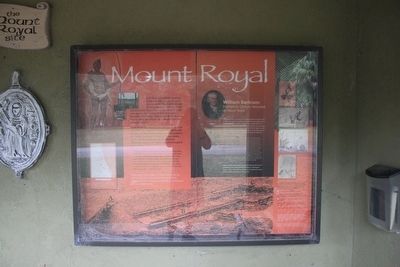 Panel 1:
Mount Royal
Mount Royal is an ancient American Indian site that includes the burial mound beyond this display, as well a the remains of a Spanish mission and associated village. The mound was built around 1,000 years ago by the Freshwater Timucua or their ancestors. Members of this same group populated the Spanish mission called San Antonio de Anacape beginning in the late sixteenth century.

Mount Royal has attracted the attention of scientists and visitors to this area for hundreds of years. The rest of this display tells the story of Mount Royal based on the observations and studies conducted by some of these notable people, including naturalist William Bertram, antiquarian Clarence B. Moore, and archaeologist B. Calvin Jones. 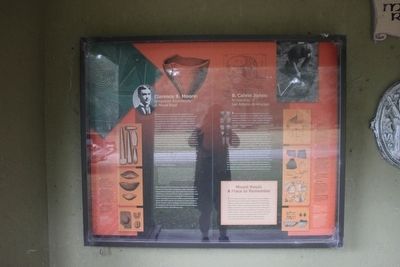 Click or scan to see
this page online
Once you go to Mount Royal, it's something that gets in your blood that never quite leaves you. - B. Calvin Jones, 1998

Please remember as you visit Mount Royal that the mound is the final resting place for many of the Timucua and that the site it considered a sacred space by many people today.

William Bartram: Eighteenth-Century Naturalist at Mount Royal
William Bartram (1739-1823) was a noted naturalist and explorer who traveled extensively in the American Southeast on the eve of the birth of the United States. He spent considerable time in eastern Florida and along the St. Johns River where a thriving British colony was developing. Bartram wrote of his observations on natural history, as well as his experiences with American Indians like the Cherokee and Seminole. Bartram visited the Mount Royal site at least twice, once with his father John Bartram in 1766 and again in 1774.

At about fifty yards from the landing place, stands a magnificent Indian mount. About fifteen years ago I visited this place, at which time there were no settlements of white people, but all appeared wild and savage; yet in that uncultivated state, it possessed an almost inexpressible extent of old fields, round about the mount; there was also a large Orange grove, together with Palms and Live Oaks extending from near the mount, along the banks, downwards 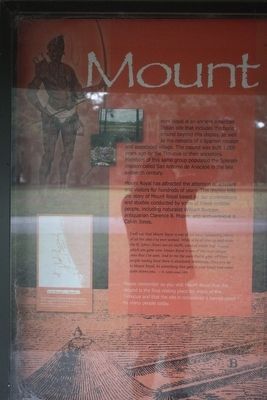 Photographed By Tim Fillmon, November 19, 2015
3. Mount Royal Marker-Close up of Panel 1
all of which has since been cleared away to make room for planting ground. But what greatly contributed towards completing the magnificence of the scene was a noble Indian highway, which led from the great mount on a strait line, three quarters of a mile, first through a point or wing of the Orange grove, and continuing thence through an awful forest of Live Oaks, it was terminated by Palms and Laurel Magnolias, on the verge of an oblong artificial lake, which was on the edge of an extensive green level savanna. This grand highway was about fifty yards wide, sank a little below the common level, and the earth thrown up on each side, making a bank of about two feet high.
William Bartram, 1791

William Bartram's observations on the Mount Royal mound and other archaeological sites, along with his information on contemporary American Indian tribes figured prominently in the nineteenth century debate regarding the origins of these mounds.

Panel 2:
Clarence B. Moore: Antiquarian Excavations at Mount Royal
Clarence B. Moore was born into a wealthy Philadelphia family, attended Harvard University and spent his twenties and thirties in the elite social circuit and traveling widely in Europe, the Americas and Africa. In the early 1890s Moore focused his attention on American Indian mound sites of the southeastern United States. He traveled 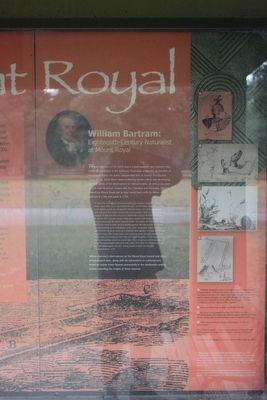 Photographed By Tim Fillmon, November 19, 2015
4. Mount Royal Marker-Close up of Panel 1
extensively, often via houseboat, and made arrangements to excavate many of the mounds along navigable waterways of the South. At the end of each excavation season he returned to Philadelphia to illustrate and describe his finds, producing 21 large books and several articles. Some archaeologists criticize Moore's approach, which often included the complete excavation of mound sites, others, however, are grateful for his careful maps and artifact illustrations, which preserve information about these sites that would have been lost to looting and mining. Many of the artifacts that Moore collected in Florida are now at the National Museum of the American Indian in Washington, D.C.

Moore excavated at Mount Royal early in his explorations; in April 1893 and again in March and April 1894 he focused on the large mound beyond this display. Moore's excavations uncovered human burials, as well as marine shell implements, polished stone tools and ornaments, shell and pearl beads, pottery, and a number of items made of copper.

Moore's description of the mound:
It's true height from the summit plateau to the base, as shown by measurement at the center of the mound, is 16 feet, the circumference is 555 feet. It is composed of the yellow sand of the surrounding fields, with pockets and local layers of white sand along and above the base. Wherever opened, the sand 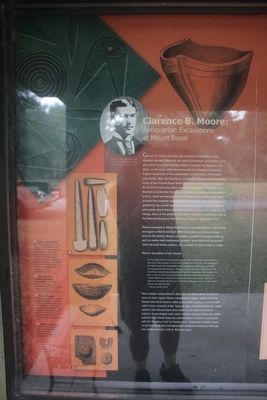 Photographed By Tim Fillmon, November 19, 2015
5. Mount Royal Marker-Close up of Panel 2
at the bottom of the mound was found mingled with pieces of charcoal. Beginning at the margin at the base, a layer of sand colored by admixture of powdered hematite ranging from crushed strawberry to brick red in color, covered the entire mound. This layer attained a maximum thickness of 7 feet on the northeastern portion of the summit plateau and adjacent slope.
Clarence Moore, 1894

Most notable among Moore's discoveries at Mount Royal are the artifacts of sheet copper. Moore compared the copper objects found in Florida with those found in other parts of the country, as well as with early French accounts of the Timucua tribe, concluding that the copper artifacts from Mount Royal were made by the ancient American Indians. Archaeologists have more recently recognized that the copper artifacts from Mount Royal are representative of artifacts associated with the "Southern Cult" of Southeastern Ceremonial Complex found at archaeological sites throughout the Southeast during the Mississippian period (around 1,100 to 400 years ago).

B. Calvin Jones: Archaeology of San Antonio de Anacape
B. Calvin Jones worked as an archaeologist for the State of Florida from 1968 until his untimely death in 1998. Jones had a distinguished career, built in part on his uncanny knack at finding significant archaeological sites. In many cases his excavations were 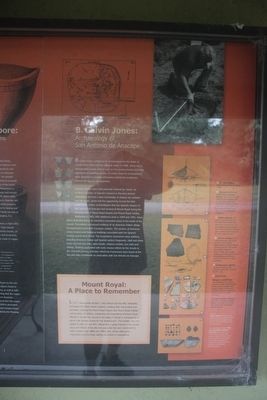 Photographed By Tim Fillmon, November 19, 2015
6. Mount Royal Marker-Close up of Panel 2
designed to salvage information before the bulldozers cleared the way for development.

Spanish mission sites held particular interest for Jones. He located a number of Spanish missions in the area around Tallahassee and had a keen knowledge of mission era artifacts and site types. Jones had the opportunity to test the idea proposed by earlier archaeologists that the Spanish mission of San Antonio de Anacape was located at Mount Royal during the development of Mount Royal Airpark and Mount Royal Estates. Beginning in 1983, with additional work in 1994 and 1995, Jones and a dedicated group of volunteers excavated areas to the south of the mound. Excavations uncovered evidence of an American Indian village occupied before and after European contact. The remains of American Indian houses and European buildings associated with the Spanish mission period were found. The excavations uncovered many artifacts, including American Indian and Spanish pottery fragments, shell and stone tools, charred corn cobs, glass beads, religious medals, iron nails and fittings. Artifacts associated with early mission efforts by the Jesuits in the sixteenth century, and later efforts by Franciscans were found at the site and help corroborate an association with San Antonio de Anacape.

Mount Royal: A Place to Remember
In 1977, Jacksonville dentist C. Paul Wilcox and his wife, Willanelle, purchased the Mount Royal property, building their home there and ultimately creating the Mount Royal Airpark and Mount Royal Estates communities. Dr. Wilcox, recognizing the importance of Mount Royal, offered to donate the mound to the State of Florida in exchange for a parcel that allowed access for the development. The transfer was completed in 1986. Dr. and Mrs. Wilcox took a great interest in the archaeology and history of the site and supported the work conducted by Calvin Jones in the 1980s and 1990s. Mrs. Wilcox often gave impromptu tours to those visiting the mound or excavations.

Location. 29° 26.013′ N, 81° 39.261′ W. Marker is near Welaka, Florida, in Putnam County. Marker is on Indian Mound Drive south of Temple Mound Road, on the right when traveling south. This marker is located in the Mount Royal Airpark. This is a gated community and it might be a bit difficult to get in even though the one-acre mound is owned by the State of Florida. Touch for map. Marker is in this post office area: Crescent City FL 32112, United States of America. Touch for directions.