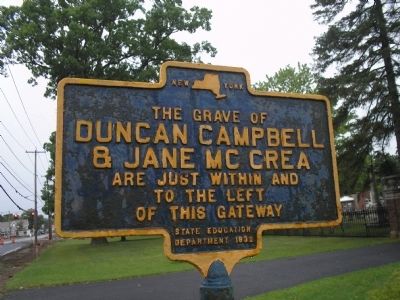 The Grave of
Duncan Campbell
& Jane McCrea
are just within and
to the left
of this gateway. 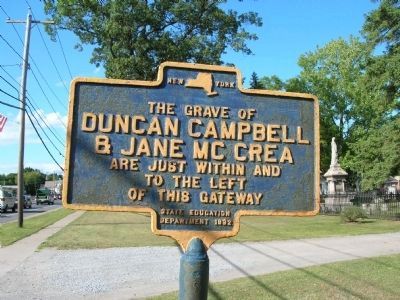 Additional commentary.
1. Jane McCrea
During the American Revolutionary War, in 1777, Jane McCrea was a 17 year old Loyalist living at the farm of her older brother, Colonel John McCrea at Fort Edward, New York in order to be close to her fiancé, Lt. David Jones, a Loyalist serving with British General Burgoyne's army. On July 27th of that year, while she was visiting the home of Mrs. McNeil, the two women were captured by Indians allied to the British.

Since both women were under the protection of General Burgoyne, they were reasonably sure nothing would happen to them. Their captors separated into two bands, each with one of the women. When Mrs. McNeil, a cousin of General Simon Fraser's, arrived with her captors at the British camp, she wondered 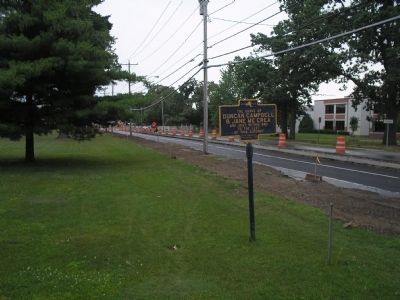 Photographed By Bill Coughlin, July 13, 2008
3. Marker in Fort Edward
where Jane was, since she had departed ahead of Mrs. McNeil. Shortly thereafter, the first party of Indians returned to the camp with a freshly scalped lock. It seems an argument had ensued over Jane McCrea, and to settle the argument, she had been killed. Other reports however state she was accidentally killed by freindly fire as the Indians made off with her.

Jane McCrea was buried three miles south of Fort Edward. Her death, and those of others in similar raids, inspired some of the resistance to Burgoyne's invasion leading to his defeat at the Battle of Saratoga. The effect expanded as reports of the incident were used, almost as propaganda, to excite rebel sympathies during the war, especially before the Sullivan Expedition in 1779.

The story became part of American folklore when James Fenimore Cooper described some similar events in his novel "The Last of the Mohicans." Later on, in 1852, McCrea's remains were removed and reintured at the Union Cemetery in the Town of Fort Edward. McCrea's remains were again exhumed in 2003 and researchers were surprised to find that McCrea's skull was missing, and her bones were commingled with those of another Revolutionary-era woman, Sara McNeil, a landowner and a cousin of British Gen. Simon Fraser. The bodies were exhumed again in 2005 in order to provide separate graves for both women. 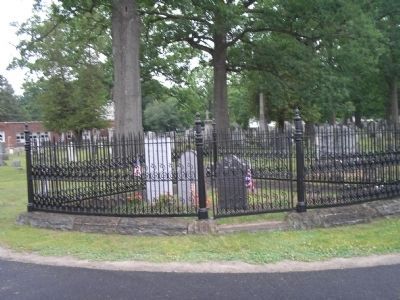 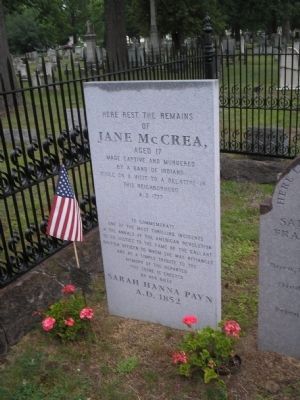 Photographed By Bill Coughlin, July 13, 2008
5. Grave of Jane McCrea
Jane McCrea was killed on July 27th, 1777 by Indians allied to the British, and under the control of General John Burgoyne while on her way to meet with her fiancée, a soldier in Burgoyne's army. 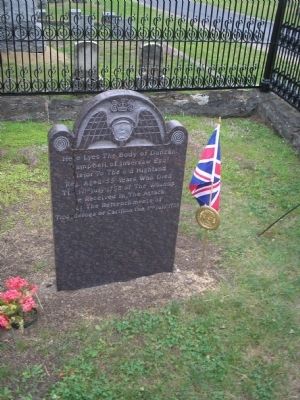