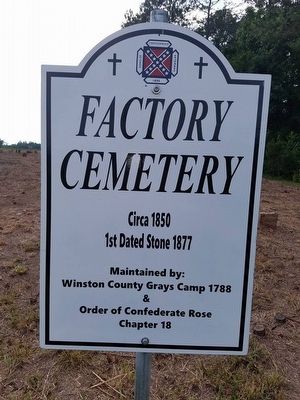 Topics. This historical marker is listed in these topic lists: Cemeteries & Burial Sites • War, US Civil. A significant historical year for this entry is 1850. 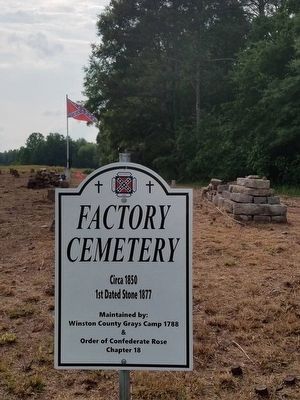 Photographed By Touring Marion County, Alabama, May 1, 2016
2. Factory Cemetery Marker
The area was initially known as Allen's Factory due to a cotton processing factory here. It was burned in the latter years of the Civil War and rebuilt.

Click or scan to see
this page online
(approx. 14.4 miles away); Byler Road / History of Natural Bridge (approx. 14.9 miles away).

More about this marker. The cemetery is unfenced and recently (May 2016) maintained by the SCV Winston County Grays Camp 1788.

Regarding Factory Cemetery. The gravestone for Second Lieut. David W. Alexander mentions that he belonged to the 16th Alabama Infantry. This regiment, assembled at Courtland, Alabama, in August, 1861, contained men from Russell, Lauderdale, Lawrence, Franklin, Cherokee, and Marion counties. The unit was ordered to Tennessee, then Kentucky where it fought at Fishing Creek under General Zollicoffer. Later it was assigned to General Wood's, Lowrey's, and Shelley's Brigade. After taking part in the Battle of Shiloh and Perryville, the 16th participated in the campaigns of the Army of Tennessee from Murfreesboro to Atlanta, moved with Hood to Tennessee, then saw action in North Carolina. In September, 1861, the regiment totalled 867 effectives. It sustained 168 casualties at Murfreesboro, and lost fifty-nine percent of the 414 engaged at Chickamauga. During December, 1863, there were 302 present for duty and 202 arms. It lost 150 killed and wounded at Jonesboro and half of its remaining force were disabled at Franklin and Nashville. On April 26, 1865, about 50 officers and men surrendered. Its commanding officers were Colonels Frederick A. Ashford, A.H. Helvenston, and William B. Wood; and Lieutenant Colonels John W. Harris, 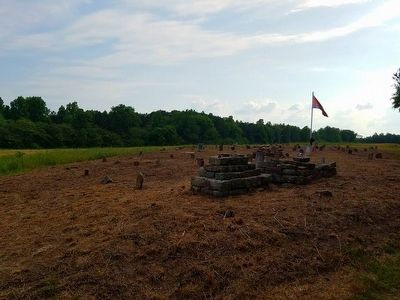 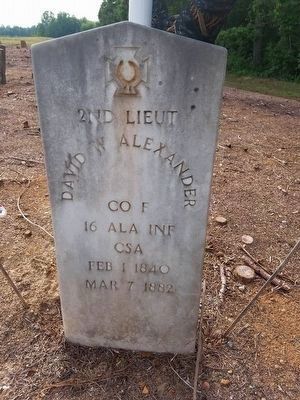