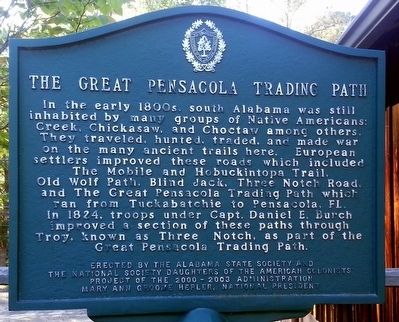 In the early 1800s, south Alabama was still inhabited by many groups of Native Americans: Creek, Chickasaw, and Choctaw among others. They traveled, hunted, traded, and made war on the many ancient trails here. European settlers improved these roads which included The Mobile and Hobuckintopa Trail, Old Wolf Path, Blind Jack, Three Notch Road, and The Great Pensacola Trading Path which ran from Tuckabatchie to Pensacola, FL. In 1824, troops under Capt. Daniel E. Burch improved a section of these paths through Troy, known as Three Notch, as part of the Great Pensacola Trading Path.

Erected by Alabama State Society and the National Daughters of the American Colonists.

Topics and series. This historical marker is listed in these topic lists: Native Americans • Roads & Vehicles. In addition, it is included in the Daughters of the American Colonists series list. 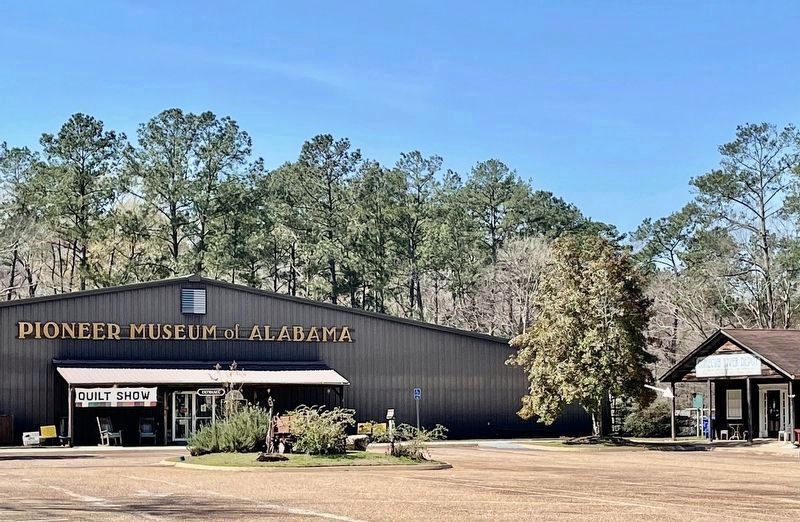 Click or scan to see
this page online
on the left when traveling north. The marker is located north of the main building of the Pioneer Museum of Alabama. Touch for map. Marker is at or near this postal address: 248 Highway 231 N, Troy AL 36081, United States of America. Touch for directions.