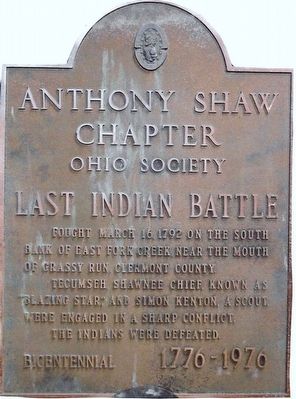 Last Indian Battle fought March 16, 1792 on the south bank of East Fork Creek near the mouth of Grassy Run Clermont County Tecumseh Shawnee Chjef, known as “Blazing Star”, and Simon Kenton, a scout, were engaged in a sharp conflict. The Indians were defeated.

Topics and series. This historical marker is listed in these topic lists: Native Americans • Settlements & Settlers • Wars, US Indian. In addition, it is included in the The Colonial Dames XVII Century, National Society series list. A significant historical date for this entry is March 16, 1792.

Location. Marker has been reported missing. It was located near 39° 8.07′ N, 84° 0.745′ W. Marker was near Williamsburg, Ohio, in Clermont County. Marker was on Glancy Corner Marathon Rd (County Route 54), on the right when traveling south. marker is missing, is supposed to be in on display at the “Harmony Hill” 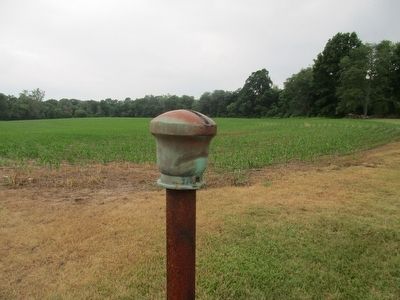 Click or scan to see
this page online
museum in Williamsburg, Ohio., post still standing (marker was in position on GoogleEarth map April 2012). Touch for map. Marker was at or near this postal address: 5301 Glancy Corner Marathon Rd, Williamsburg OH 45176, United States of America. Touch for directions. 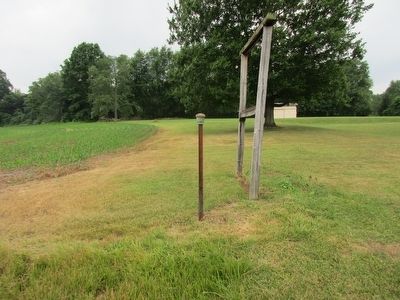 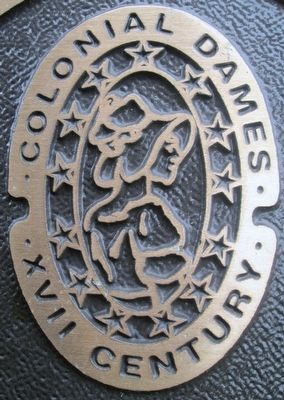