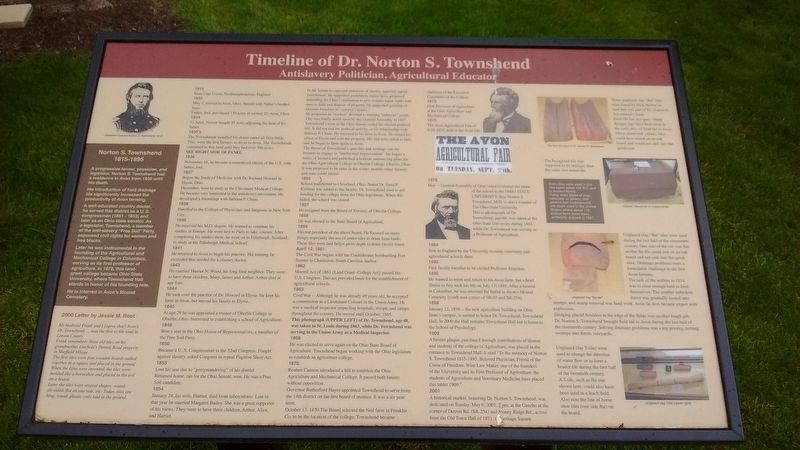 His introduction of field drainage tile significantly increased the productivity of Avon farming.

A well educated country doctor, he served this district as a U.S. congressman (1851 - 1853) and later as an Ohio state senator. As a legislator, Townshend, a member of the anti-slavery "Free Soil" Party, espoused civil rights for women and free blacks.

Later he was instrumental in the founding of the Agricultural and Mechanical College in Columbus, serving as its first professor of agriculture. In 1878, this land-grant college became Ohio State University, where Townshend Hall stands in honor of his founding role.

He is interred in Avon's Mound Cemetery.

2000 Letter by Jessie M. Root , My husband Frank and I (agree that) Avon's Dr. Townshend, ...was the first to tile land in Lorain County.

Later the tiles were several shapes: round, six-sided, flat on one side, etc. Today, tiles are long, round, plastic coils laid in the ground.

A progressive farmer, physician, and legislator, Norton S. Townshend had a residence in Avon from 1830 until his death.

His introduction of field drainage tile significantly increased the productivity of Avon farming.

A well educated country doctor, he served this district as a U.S. congressman (1851 - 1853) and later as an Ohio state senator. As a legislator, Townshend, a member of the anti-slavery "Free Soil" Party, espoused civil rights for women and free blacks.

Later he was instrumental in the founding of the Agricultural and Mechanical College in Columbus, serving as its first professor of agriculture. In 1878, this land-grant college became Ohio State University, where Townshend Hall stands in honor of his founding role.

He is interred in Avon's Mound Cemetery.

2000 Letter by Jessie M. Root
My husband Frank and I (agree that) Avon's Dr. Townshend, ...was the first to tile land in Lorain County.

The first tiles were four wooden boards nailed together in a square and placed in the ground. 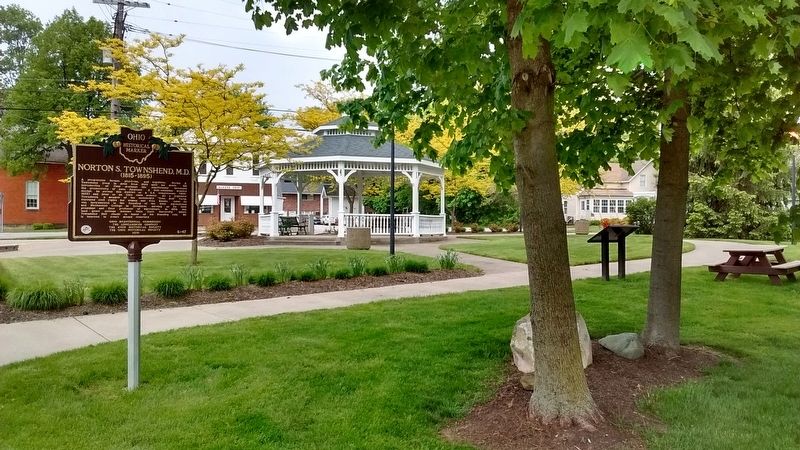 Click or scan to see
this page online
When kilns were invented, the tiles were molded like a horseshoe and placed in the soil on a board.

Later the tiles were several shapes: round, six-sided, flat on one side, etc. Today, tiles are long, round, plastic coils laid in the ground.

1815 - Born Clay Coton, Northamptionshire, England
1830 - May 1, arrived in Avon, Ohio. Stayed with Father's brother, Isaac. Father, Joel, purchased 150 acres in section 22, Avon, Ohio
1834 - 11 April, Norton bought 25 acres adjoining the land of his father.
1830's - The Townshends installed tile drains under all their fields. They were the first farmers to do so in Avon. The Townshends continued to buy land until they had over 300 acres. See Right Side of Panel
1836 - November 16 he became a naturalized citizen of the U.S. with father, Joel.
1837 - Began the Study of Medicine with Dr. Richard Howard in Elyria, Ohio. December went to study at the Cincinnati Medical College. He became very interested in the antislavery movement. He developed a friendship with Salmon P. Chase.
1839 - Enrolled in the College of Physicians and Surgeons in New York City.
1840 - He received his M.D. degree. He wanted to continue his studies in Europe. He went first to Paris to take courses. After completing his studies there, he went on to Edinburgh, Scotland, to study at the Edinburgh Medical School.
1841

- He returned to Avon to begin his practice. His training far exceeded that needed for a country doctor.
1843 - He married Harriet N. Wood, his long time neighbor. They were to have three children, Mary, James and Arthur. Arthur died at age four.
1844 - He took over the practice of Dr. Howard in Elyria. He kept his farm in Avon, but moved his family to Elyria.
1845 - At age 29 he was appointed a trustee of Oberlin College in Oberlin, Ohio. Interested inestablishing a school of Agriculture.
1848Won a seat in the Ohio House of Representatives, a member of the Free Soil Party.
1850 - Became a U.S. Congressman in the 32nd Congress. Fought against slavery, asked Congress to repeal Fugitive Slave Act.
1853 - Lost his seat due to "gerrymandering" of his district. Returned home, ran for the Ohio Senate, won. He was a Free Soil candidate.
1854 - January 24, his wife, Harriet, died from tuberculosis. Late in that year he married Margaret Bailey. She was a great supporter of his views. They were to have three children, Arthur, Alice, and Harrier.

In the Senate he opposed extension of slavery, opposed capital punishment. He supported prohibitory liquor laws, proposed amending the Ohio Constitution to give women equal rights with men to hold and dispose of property. He supported granting of elective franchise to "colored citizens".

He proposed an "asylum" devoted to training "imbecile" youth. This was finally acted upon by the General Assembly in 1857. Townshend's term in the Ohio Senate ended his elected political life. It did not end his political activity, or his relationship with Salmon P. Chase. He returned to his farm in Avon. He closed his office in Elyria and sold the property. His first love called to him, and he began to farm again in Avon.

The theme of Townshend's speeches and writings was for farmers to engage in "intellectual improvement". He began a series of lectures and published a bulletin announcing plans for the Ohio Agricultural College at Oberlin College, Oberlin, Ohio. It was proposed to be open in the winter months when farmers and sons could attend.

1855 - School transferred to Cleveland, Ohio. noted Dr. Jared P. Kirtland was added to the faculty. Dr. Townshend tried to get funding for the college from the Ohio legislature. When this failed, the school was closed.
1857 - He resigned from the Board of Trustees of Oberlin College.
1858 - He was elected to the State Board of Agriculture.
1859 - Elected president of the above board. He focused on many things, especially the use of under-tiles to drain farm lands. These tiles were laid below plow depth to drain excess water.
April 12 - 1861 - The Civil War begins with the Confederate bombarding Fort Sumter in Charleston, South Carolina, harbor.
1862 - Morrell Act of 1862 (Land Grant - College Act) passed the U.S. Congress. This act provided lands for the establishment of agricultural schools.
1863 - Civil War - Although he was already 49 years old, he accepted a commission as a Lieutenant Colonel in the Union Army. He was a medical inspector inspecting hospitals, troops, and camps throughout the country. He served until October, 1865. This photograph (upper left) of Dr. Townshend, age 48, was taken in St. Louis during 1863, while Dr. Townshend was serving in the Union Army as a Medical Inspector.
1868 - He was elected to serve again on the Ohio State Board of Agriculture. Townshend began working with the Ohio legislature to establish an agricultural college.
1870 -Reuben Cannon introduced a bill to establish the Ohio Agriculture and Mechanical College. It passed both houses without opposition. Governor Rutherford Hayes appointed Townshend to serve from the 14th district on the first board of trustees. It was a six year term. October 13, 1870 The Board selected the Neil farm in Franklin Co. to be the location of the college. Townshend became chairman of the Executive Committee of the College.
1873 - First Professor of Agriculture at the Ohio Agriculture and Mechanical College.
1875 - The Avon Agricultural Fair of 9-28-1875, held at the Avon Isle.
1878 - May - General Assembly of Ohio voted to change the name of the school to the Ohio State University; thus Norton S. Townshend, M.D. is also a founder of The Ohio State University. This is photograph of Dr. Townshend, age 68, was taken at the Ohio State University during 1883 while Dr. Townshend was serving as a Professor of Agriculture.
1884 - Sent to England by the University to study veterinary and agricultural schools there.
1892 - First faculty member to be elected Professor Emeritus.
1895 - He wanted to retire and return to his Avon farm, but a brief illness in July took his life on July 13, 1895. After a funeral in Columbus, he was returned for burial in Avon's Mound Cemetery (south-east corner of SR-83 and SR-254).
1898 - January 12, 1898 - the new agriculture building on Ohio State's campus, is named to honor Dr. Townshend, Townshend Hall. In 2000 the Hall remains Townshend Hall but is home to the School of Psychology.
1909 - A bronze plaque, purchased through contributions of alumni and students of the college of Agriculture, was placed in the entrance to Townshend Hall. It read "To the memory of Norton S. Townshend 1815 - 1895. Beloved Physician Friend of the Cause of Freedom, Wise Law Maker, on of the founders of the University and its First Professor Emeritus of Agriculture, the students of Agriculture and Veterinary Medicine have placed this tablet 1909".
2001 - A historical marker, honoring Dr. Norton S. Townshend, was dedicated on Sunday, May 6, 2001, 2pm, at the gazebo at the corner of Detroit Rd. (SR-254) and Stoney Ridge Rd., across from the Old Town Hall of 1871, in Heritage Square.
These unglazed clay "flat" tiles were found by Dick Herbst on land that was part of Dr. Norton S. Townshend's farm. Each tile has two parts. Many designs may have been tried in the early days of field tile in Avon. These nineteenth century tiles could have rested on an oak board and would not sink into the quicksand.

The hexagonal tile was supposed to be stronger than the same size round tile.

Drain tiles were used in the Nile basin about 400 B.C. and in ancient Rome. Today drain pipes of clay, concrete, or plastic, laid several feet underground, are much used in the United States, where about 110 million farm acres were artificially drained in 1987.

Unglazed clay "flat" tiles were used during the last half of the nineteenth century. One side of the tile was flat so that the tile could rest on a oak board and not sink into the quick sand. Drainage problems were a formidable challenge to the first Avon farmers.

The task of the settlers in 1814 was to clear enough land to feed themselves. The somber unbroken forest was gradually turned into stumps, and stump removal was hard work. Avon farmers became expert with explosives.

Sledging glacial boulders to the edge of the fields was another tough job. Dr. Norton S. Townshend bought field tile to Avon during the last half of the nineteenth century. Solving drainage problems was a top priority, turning swamps into fertile vineyards.

Unglazed clay T-tiles were used to change the directions of water flow or to form a header tile during the first half of the twentieth century. A T-tile, such as the one shown here, could also have been used in a leach field. Also not the line of horse shoe tiles (one flat side) on the board.

Topics and series. This historical marker is listed in these topic lists: Abolition & Underground RR • Agriculture • Government & Politics • Science & Medicine. In addition, it is included in the Former U.S. Presidents: #19 Rutherford B. Hayes series list. A significant historical year for this entry is 1815.