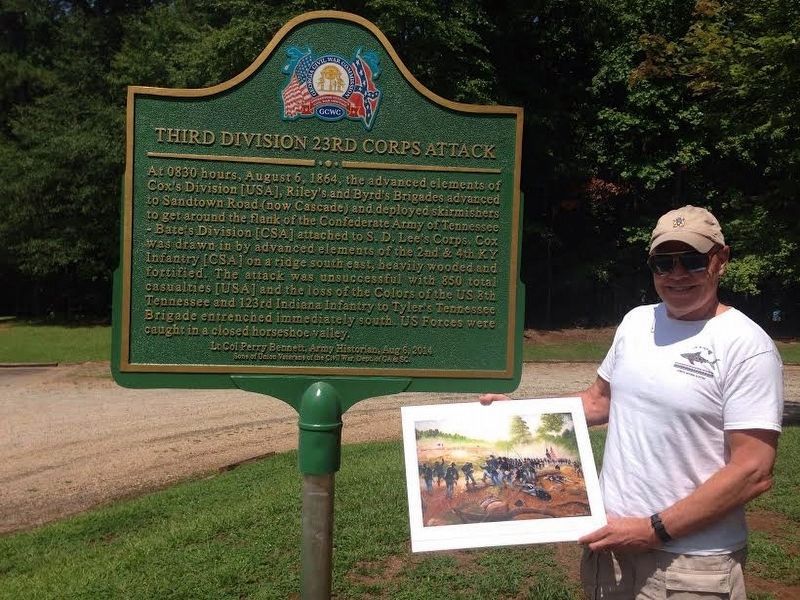 (side 1)
Third Division 23rd Corps Attack
At 0830 hours, August 6, 1864, the advanced elements of Cox's Divison (USA), Riley's and Byrd's Brigades advanced to Sandtown Road (now Cascade) and deployed skirmishers to get around the flank of the Confederate Army of Tennessee - Bate's Division (CSA) attached to S.D. Lee's Corps. Cox was drawn in by advanced elements of the 2nd and 4th KY Infantry (CSA) on a ridge south east, heavily wooded and fortified. The attack was unsuccessful with 850 total casualties (USA) and the loss of the Colors of the US 8th Tennessee and 123rd Indiana Infantry to Tyler's Tennessee Brigade entrenched immediately south. US forces were caught in a closed horseshoe valley.

(side 2)
Second Division 23rd Corps Attack
At 1130 hours, August 6, 1864, the advanced elements of Hascall's Division (USA), GEN Strickland's and COL Swayne's Brigades advanced across the Sandtown Road (now Cascade)and deployed with skirmishers facing south. They made a Combat Crossing of South Utoy Creek, to get around the flank of the Confederate Army of Tennessee - Bates Division (CSA) attached 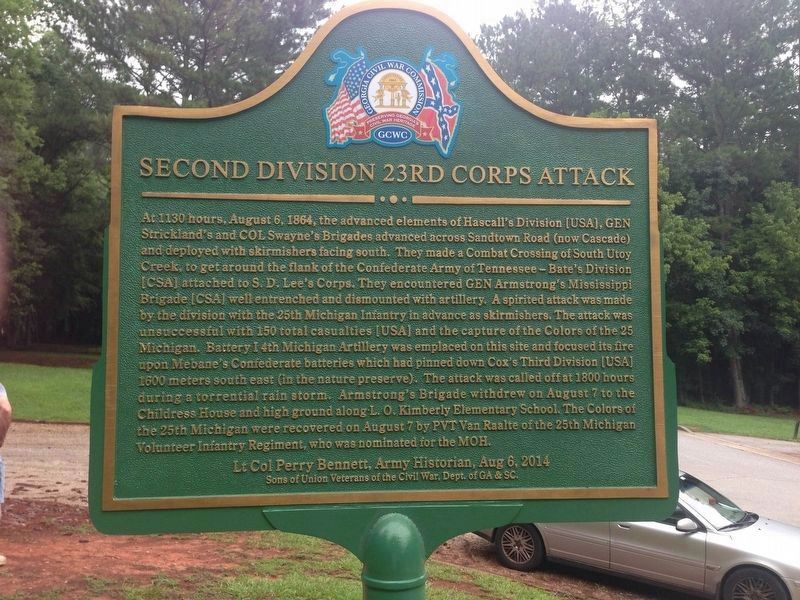 Click or scan to see
this page online
to S.D. Lee's Corps. They encountered GEN Armstrong's Mississippi Brigade (CSA) well entrenched and dismounted with artillery. A spirited attack was made by the division with the 25th Michigan Infantry in advance as skirmishers. The attack was unsuccessful with 150 total casualties (USA) and the capture of the Colors of the 25th Michigan. Battery I 4th Michigan Artillery was emplaced on this site and focused its fire upon Mebane's Confederate batteries which had pinned down Cox's Third Division (USA) 1600 meters meters south east (in the nature preserve). The attack was called off at 1800 hours during a torrential rain storm. Armstrong's Brigade withdrew on August 7 to the Childress House and high ground along L.O. Kimberly Elementary School. The Colors of the 25th Michigan were recovered on August 7 by PVT Van Raalte of the 25th Michigan Volunteer Infantry Regiment, who was nominated for the MOH.

Topics. This historical marker is listed in this topic list: War, US Civil. A significant historical date for this entry is August 6, 1864.

Location. 33° 43.186′ N, 84° 28.866′ W. Marker is in Atlanta, Georgia, in Fulton County. Marker can be reached from the intersection of Old Sandtown Road Southwest and Cascade Road Southwest. Located in the Cascade Springs Nature Preserve parking lot. Touch for map. Marker is at or near this postal address: 2852 Cascade Rd SW, Atlanta GA 30311, United States of America. Touch for directions.

Editor’s want-list for this marker. Wide shot of marker and its surroundings • Can you help?
Share This Page.