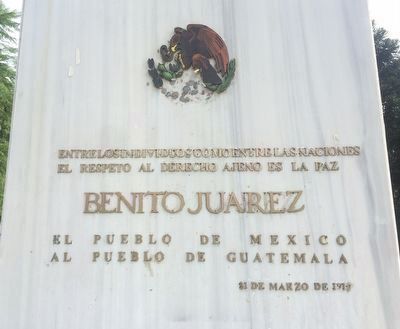 Photographed By J. Makali Bruton, August 6, 2016
1. Benito Juárez Marker
The marker was previously vandalized. The restoration of the marker did not completely match the letter spacing of the original.
Inscription.
English translation: Between individuals and nations, peace is the respect of the rights of others,
Benito Juarez. From the people of Mexico To the people of Guatemala March 21, 1970 . This historical marker was erected in 1970. It is in Guatemala City in Guatemala