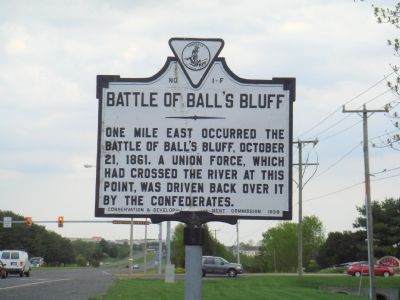 One mile east occurred the Battle of Ball’s Bluff, October 21, 1861. A Union force, which had crossed the river at this point, was driven back over it by the Confederates. 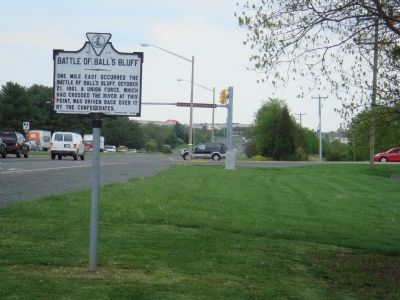 More about this marker. This marker was replaced by a new one also named Battle of Ball's Bluff (see nearby markers).

Regarding Battle of Ball’s Bluff. This marker is one of a set along the Balls Bluff Battlefield walking trail. See the Balls Bluff Virtual Tour by Markers link below for details on each stop.

This marker was damaged in the fall of 2014. Plans are to replace it with a new marker with different text.

5. Volunteers Work to Replace marker. Efforts to replace the marker. (Submitted on January 29, 2015, by Craig Swain of Leesburg, Virginia.)