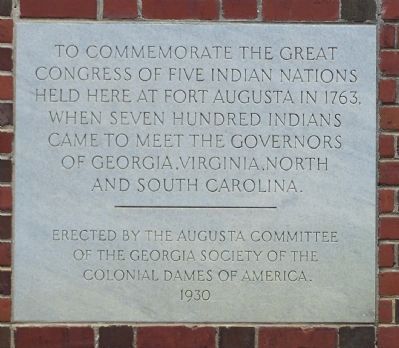 Photographed By Mike Stroud, 2008
1. Five Indian Nations Marker
Inscription.
Five Indian Nations. . To commemorate the great congress of five Indian Nations held here at Fort Augusta in 1763. When seven hundred Indians came to meet the Governors of Georgia, Virginia, North and South Carolina. . This historical marker was erected in 1930 by Augusta Committee of the Georgia Society of the Colonial Dames of America. It is in Augusta in Richmond County Georgia

To commemorate the great congress of five Indian Nations held here at Fort Augusta in 1763. When seven hundred Indians came to meet the Governors of Georgia, Virginia, North and South Carolina.

Erected 1930 by Augusta Committee of the Georgia Society of the Colonial Dames of America.

Topics and series. This historical marker is listed in these topic lists: Native Americans • Notable Events. In addition, it is included in the The Colonial Dames of America, National Society of series list. A significant historical year for this entry is 1763. 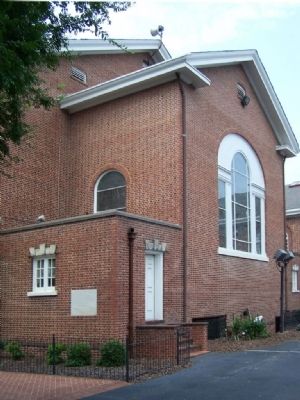 Click or scan to see
this page online
shouting distance of this marker); U.S. Marshal Robert Forsyth (within shouting distance of this marker); Fort Augusta ~ Fort Cornwallis / St. Paul's Episcopal Church (about 300 feet away, measured in a direct line); Colonel William Few, Jr. (about 400 feet away); Major Ferdinand Phinizy (about 400 feet away). Touch for a list and map of all markers in Augusta. 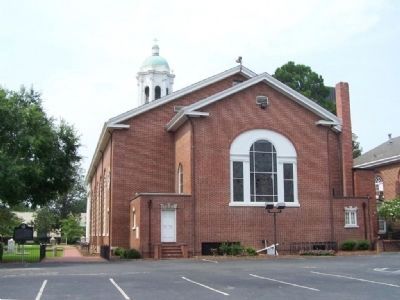 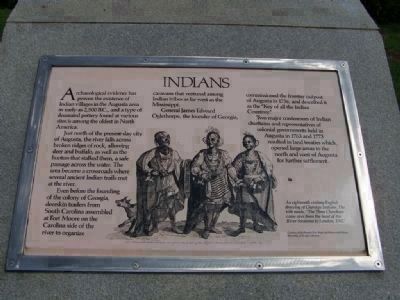 Photographed By Mike Stroud, 2008
4. Five Indian Nations Marker additional marker along River Walk Park ~
Indians
Archeaological evidence has proven the existence of Indian villages in the Augusta area as early as 2,500 B.C., and a type of decorated pottery found at various sites is amoung the oldest in North America. Just north of the present-day city of Augusta, the river falls across broken ridges of rock, allowing deer and buffalo, as well as the hunters that stalked them, a safe passage across the water. The area became the crossroads where several ancient Indian trails met at the river. Even before the founding of the colony of Georgia, deerskin traders from South Carolina assembled at Fort Moore on the Carolina side of the river to organize caravans that ventured amoung Indian tribes as far west as the Mississippi. General James Oglethorpe, the founder of Georgia, commissioned the frontier outpost of Augusta in 1736, and described it as the " Key of all the Indian Countrey". Two major conferences of the Indian chieftains and representatives of colonial governments held in Augusta in 1763 and 1773 resulted in land treaties which opened large areas to the north and west of Augusta for further settlement.
An eighteenth century English drawing of Cherokee Indians. The title reads, " The Three Cherokees came over from the head of the River Savanna to London, 1762."
Courtsey of the Hargrett Rare Book and Manuscript Library, University of Georgia Libraries
Credits. This page was last revised on June 16, 2016. It was originally submitted on August 3, 2008, by Mike Stroud of Bluffton, South Carolina. This page has been viewed 1,558 times since then and 30 times this year. Photos:   1, 2, 3. submitted on August 3, 2008, by Mike Stroud of Bluffton, South Carolina.   4. submitted on August 5, 2008, by Mike Stroud of Bluffton, South Carolina. • Kevin W. was the editor who published this page.
Share this page.