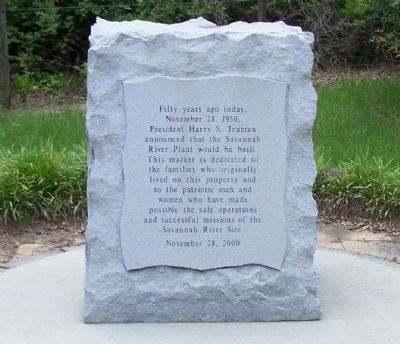 Fifty Years ago today,
November 28, 1950,
President Harry S.Truman
announced that the Savannah
River Plant would be built.
This marker is dedicated to
families who originally
lived on this property and
to the patriotic men and
woman who have made
possible the safe operations
and successful missions of the
Savannah River Site

Other nearby markers. At least 9 other markers are within 17 miles of this marker, measured as the crow flies. Site of Ellenton (here, next to this marker); Savannah River Plant (approx. 11.8 miles away); Botsford Church - 1773 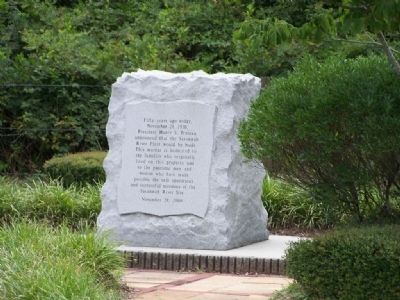 Regarding Savannah River Site. When the Cold War began in the 1950s, the nation called on Aiken, Barnwell and Allendale counties to provide about 200,000 acres of farmland and forest. Nearly 1,500 families were displaced in the name of freedom and protection from Soviet Communism.
The federal government put more than 38,000 people to work by September 1952, toiling around the clock toward the production of plutonium and uranium needed for hydrogen and atomic bombs.

Related markers. Click here for a list of markers that are related to this marker. To better understand the relationship, see markers 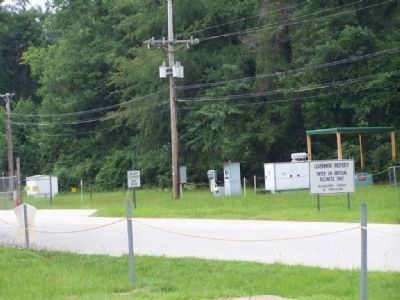 4. SRS - 50th Anniversary. Through text and images, this 50th anniversary book presents an interactive comprehensive history of the Department of Energy’s Savannah River Site, one of the major research and production facilities in in the United States’ nuclear complex. (Submitted on January 10, 2011, by Brian Scott of Anderson, South Carolina.) 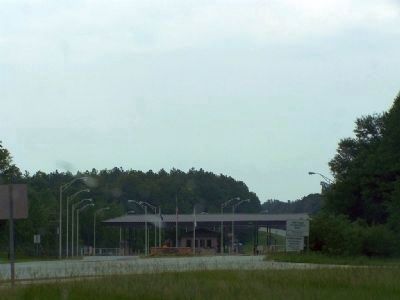 By Mike Stroud, 2008
4. Savannah River Site Controlled Entry
1. Full text of the P and R Reactor's Historical Markers
The following inscriptions appear on two historical markers, erected in 2008 by the U.S. Department of Energy. Unfortunately, these markers are closed to the general public. The text comes from the South Carolina Department of Archives and History.

P Reactor (Marker 2-36)
[Front]: One of five production reactors at Savannah River Plant, now Savannah River Site, P Reactor was the site of cutting-edge neutrino research. In 1956, Drs. Clyde Cowan, Jr., and Frederick Reines used P Reactor to confirm for the first time the existence of the free neutrino, a sub-atomic particle of extremely small mass. As a result, Reines won the 1995 Nobel Prize in Physics.

[Reverse] P Reactor not only generated prize-winning research but also produced plutonium and tritium for national defense. Built from 1951-1954, it was the second of five reactors here to go on line, running from initial start-up, Feb. 20, 1954, until final shutdown in 1988. During that period, it had the best safety record of any nuclear reactor at the Savannah River Plant. 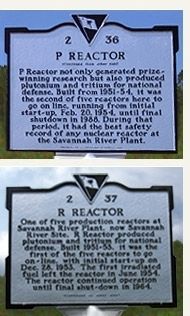 P Reactor
P Reactor not only generated prize- winning reach but also produced plutonium and tritium for national defense. Built from 1951 - 1954, it was the of five reactors here to go on line, running from initial start - up, Feb. 20, 1954, until final shutdown in 1988. During that period, it had the best safety record of any nuclear reactor at Savannah River Plant.

[Reverse] This was the first production reactor to use heavy water as the neutron moderator and coolant. It was also the first to have vertical fuel and control rod assemblies, with more than 600 positions in the reactor tank. Originally rated at 378 MW, R Reactor achieved power levels many times that. It was the largest of the SRP reactors and was a prototype for the other four.
— Submitted January 10, 2011, by Brian Scott of Anderson, South Carolina.
2. Historical Marker Dedication 2010
Aiken Standard
8/27/10
A crowd of more than 50 people gathered in front of the Greater Aiken Chamber of Commerce Friday morning to commemorate scientific history made in Aiken 54 years ago.
Members of local government, county residents and Savannah River Site employees and their families kicked off the all-day celebration of the discovery of the neutrino, an elementary particle with no charge and nearly no mass first detected at SRS.
The discovery, made by a team led by Clyde Cowan and Frederick Reines, earned the only Nobel Prize for physics ever awarded 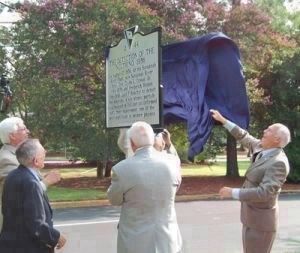 The Nobel Prize, 1995
In 1995 Dr. Frederick Reines was awarded the Nobel Prize in Physics for his and Dr. Clyde L. Cowan’s detection of the neutrino at the Savannah River Plant. The Nobel citation called their experiment “a pioneering contribution that opened the doors to the region of ‘impossible’ neutrino experiments.”
2-44 Erected by the Savannah River Site Heritage Foundation, 2010
in the state of South Carolina to date.
"Neutrinos are the closest thing to nothing that's still something," SRS Heritage Foundation Executive Director Walt Joseph said last week, a sentiment that was also printed on T-shirts worn by several members of the audience."If the neutrino had never been detected, the conservation of energy would have always been in doubt," Joseph said Friday.
The discovery of the neutrino came about when scientists were unable to account for a small amount of energy in their calculational models that they could not detect. Through the use of P Reactor at SRS, Cowan and Reines were able to detect the particle, which can pass through matter almost undisturbed.
The importance of the discovery did not stop at its detection, Joseph said, but allowed scientists to apply the new knowledge to calculations related to the Big Bang, also known as the "Birth of the Universe."
The ceremony's speakers, including County Council chairman Ronnie Young, praised the members of the audience - many of whom wore shirts with SRS emblems embroidered on them - for their contributions to an important piece of local history.
"Those who come after us will understand the heritage of the site," Young said.
Among the crowd on Friday morning were Marian Cowan Kriston and Elizabeth Cowan Riordon, daughters of the late Clyde Cowan, who returned to Aiken this week from Maryland and Ohio, respectively.
"The family is so excited, and we have such memories of Aiken. It is so wonderful that they've kept the history," said Marian, who was just over 1 year old at the time of the discovery. "It is so exciting what they're doing because the newcomers don't know the history."
Elizabeth, who was 11 years old when her father detected the neutrino at SRS, recalls the partnership between her father and Reines.
"Fred kept the math going, and Daddy - he liked the math, but he kept the equipment going," she said.
The historical marker, which now stands directly in front of the chamber building at 121 Richland Ave., was also unveiled during the ceremony. The plaque, a replica of the original plaque awarded by the U.S. Atomic Energy Commission which is now at the University of California-Irvine, was also officially unveiled at the ceremony.The celebration continued Friday afternoon with informative presentations at USCA's Etherredge Center. The crowd watched a video of the late Cowan discussing the experiments and research that led to the neutrino's detection, as well as presentations about neutrinos in particle astrophysics and neutrino research in using accelerators.
The evening concluded with a sit-down dinner at Newberry Hall and a speech by Dr. John Palms, distinguished president emeritus of the University of South Carolina.
The event was part of Aiken's 175th anniversary celebration.
— Submitted January 10, 2011, by Mike Stroud of Bluffton, South Carolina.
Credits. This page was last revised on April 18, 2021. It was originally submitted on August 6, 2008, by Mike Stroud of Bluffton, South Carolina. This page has been viewed 2,432 times since then and 40 times this year. Photos:   1, 2, 3, 4. submitted on August 6, 2008, by Mike Stroud of Bluffton, South Carolina.   5. submitted on January 19, 2009, by Mike Stroud of Bluffton, South Carolina.   6. submitted on January 10, 2011, by Mike Stroud of Bluffton, South Carolina. • Craig Swain was the editor who published this page.
Share This Page.