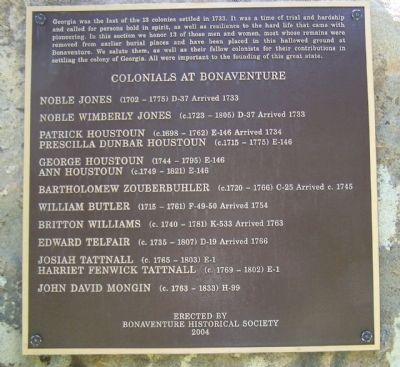 Georgia was the last of the 13 colonies settled in 1733. It was a time of trial and hardship and called for persons bold in spirit, as well as resilience to the hard life that came with pioneering. In this section we honor 13 of those men and woman, most whose remains were removed from earlier burial places and have been placed in this hallowed ground at Bonaventure. We salute them, as well as their fellow colonists for their contributions in settling the colony of Georgia. All were important to the founding of this great state. 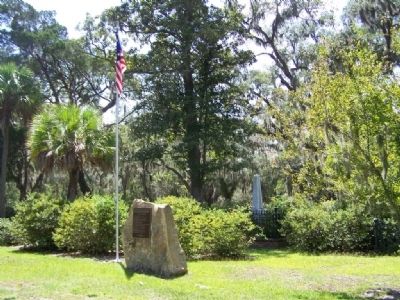 Other nearby markers. At least 8 other markers are within 3 miles of this marker, measured as the crow flies. Fred Wessels, Senior (about 700 feet away, measured in a direct line); The History of Victor B. Jenkins Jr. Memorial Boys Club (approx. 0.2 miles away); Roger Lacy (Lacey) (approx. one mile away); Savannah State College (approx. 1.7 miles away); Walter Bernard Hill Hall (approx. 1.8 miles away); Roll of Honor (approx. 2.3 miles away); American Grand Prize Races (approx. 2.4 miles away); CSS Georgia: The "Ladies' Gunboat" (approx. 2½ miles away). Touch for a list and map of all markers in Thunderbolt.

More about this marker. Bonaventure Cemetery, in Savannah, Georgia, is located on the site of a plantation originally owned by John Mullryne, whose daughter Mary married Josias Tatnall, Sr. The wife of Tatnall's son, Harriet Fenwick Tattnall, was buried on the plantation in 1802. The plantation was converted to a cemetery in 1868, and was originally called Evergreen Cemetery; its name was changed to Bonaventure Cemetery in 1907.
The cemetery became famous when it was featured in the book Midnight in the Garden of Good and Evil by John Berendt, and in the movie, directed by Clint Eastwood, based on it. The book's cover photograph, taken by Jack Leigh, featured an evocative sculpture of a young girl that had been in the cemetery—essentially unnoticed for over 50 years—and which has come to be known as the "Bird Girl". The original sculpture had been placed on the family plot of Lucy Boyd Trosdal. After the publication of the book, it was donated to Savannah's Telfair Museum of Art to avoid the disturbances that tourists wanting to see it at the cemetery were causing. 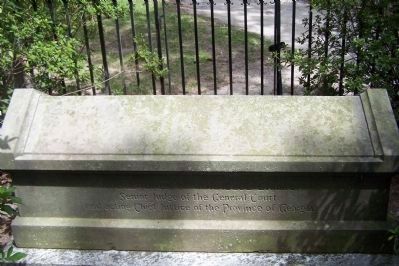 By Mike Stroud, 2008
3. Colonials at Bonaventure - Cenotaph for Noble Jones (1702-1775)
He was an English-born carpenter, and was one of the first settlers of the Province of Georgia, one of its leading officials, Speaker of the Georgia House of Representatives, and prominent leader of the Georgia patriots during the American Revolution. He, and his son Noble Wimberly, are buried nearby in a family vault behind George Jones (1766-1838). 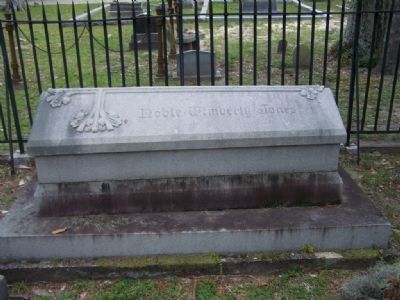 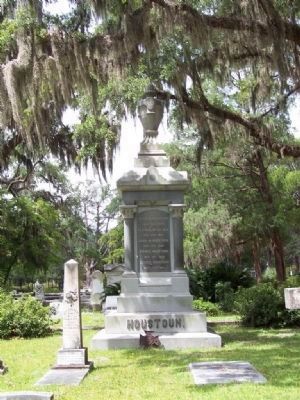 By Mike Stroud, August 1, 2008
5. Colonials at Bonaventure - Houstouns
Born as the grandson of Scottish knight and baronet Sir Patrick Houstoun, Patrick Houstoun left Scotland in 1734 and settled near what is now Richmond Hill, Georgia, land that would later belong to Henry Ford. When Patrick’s cousin Sir John Houstoun died without male heirs, the title of baronet passed to Patrick. Houstoun then entered the political area, serving all three royal governors. He was soon appointed as a member of the Royal Council of Georgia, and Houstoun found himself the ranking member within mere months. Houstoun spent his time advising the governor on matters ranging from Indian affairs to matters of public safety. Ann Priscilla Houstoun, married George McIntosh, fourth son of John Mohr McIntosh, the Highland Chieftain who went to Georgia from Inverness with 130 Highlanders. From this marriage descended branches of the families of Clinch, Sadler, Loud, Shanklin, Elliotts of South Carolina, Heyward and others. 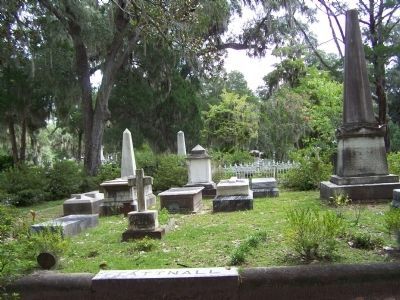 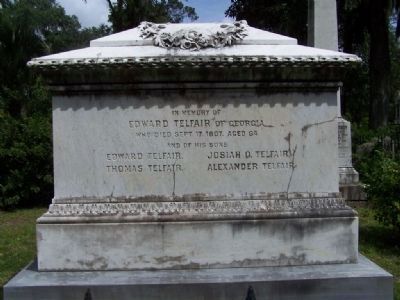 By Mike Stroud, August 31, 2008
7. Colonials at Bonaventure - Telfairs
Telfair was a member of the Continental Congress for 1778, 1780, 1781, and 1782. He was one of the signers of the Articles of Confederation and a delegate to the State ratification convention. In 1783, he was commissioner to treat with the Cherokee Indians. Telfair was also designated agent on the part of Georgia to settle the northern boundary of the Commonwealth in February 1783, and eventually Governor of Georgia. 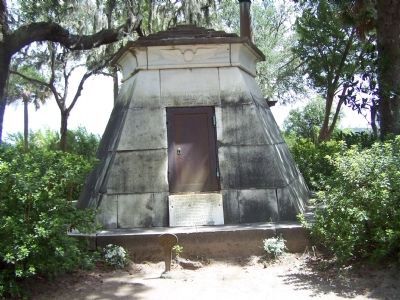 By Mike Stroud, August 31, 2008
8. Colonials at Bonaventure - Mongins
Mr. Mongin was a planter of Sea Island cotton whose father-in-law lived at Bloody Point on Daufuskie Island. The Mongins inherited the Daufuskie property 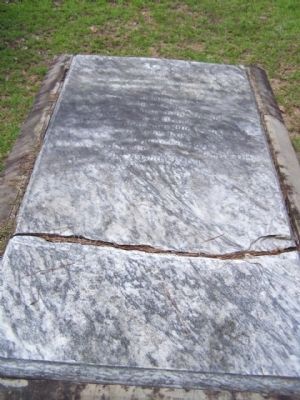 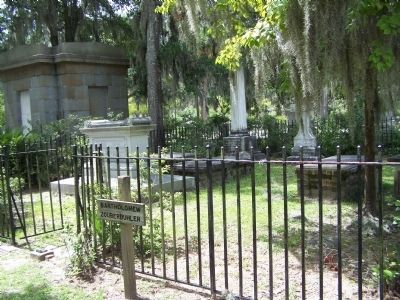