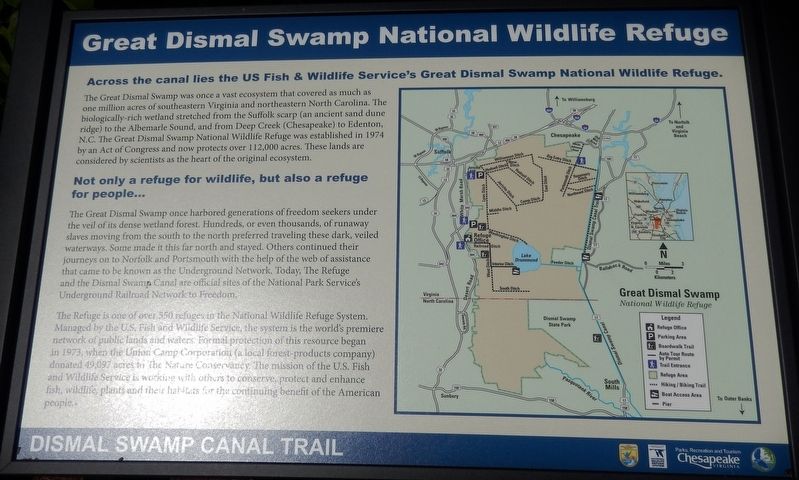 The Great Dismal Swamp was once a vast ecosystem that covered as much as one million acres of southeastern Virginia and northeastern North Carolina. The biologically-rich wetland stretched from the Suffolk scarp (an ancient sand dune ridge) to the Albemarle Sound, and from Deep Creek (Chesapeake) to Edenton, N.C. The Great Dismal Swamp National Wildlife Refuge was established in 1974 by an Act of Congress and now protects over 112,000 acres. These lands are considered by scientists as the heart of the original ecosystem.

Not only a refuge for wildlife, but also a refuge for people...
The Great Dismal Swamp once harbored generations of freedom seekers under the veil of its dense wetland forest. Hundreds, or even thousands, of runaway slaves moving from the south to the north preferred traveling these dark, veiled waterways. Some made it this far north and stayed. Others continued their journeys on to Norfolk and Portsmouth with the help of the web of assistance that came to be known as the Underground 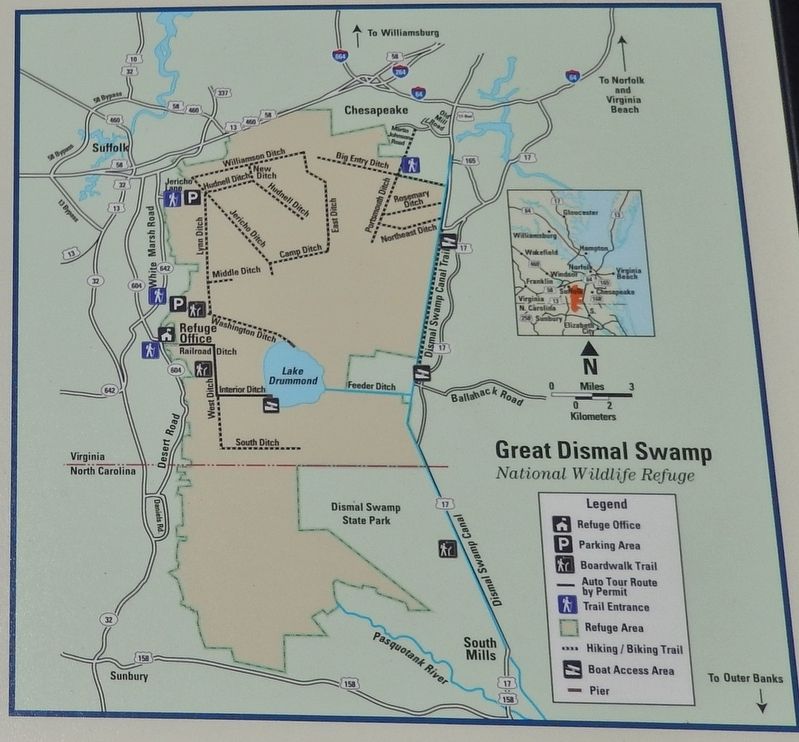 Click or scan to see
this page online
Network. Today, The Refuge and the Dismal Swamp Canal are official sites of the National Park Service's Underground Railroad Network to Freedom.

The Refuge is one of over 550 refuges in the National Wildlife Refuge System. Managed by the U.S. Fish and Wildlife Service, the system is the world's premiere network of public lands and waters. Formal protection of this resource began 1973 when the Union Camp Corporation (a local forest products company) donated 49,097 acres to The Nature Conservancy. The mission of the U.S. Fish and Wildlife Service is working with others to conserve, protect and enhance fish, wildlife, plants and their habitats for the continuing benefit of the American people. 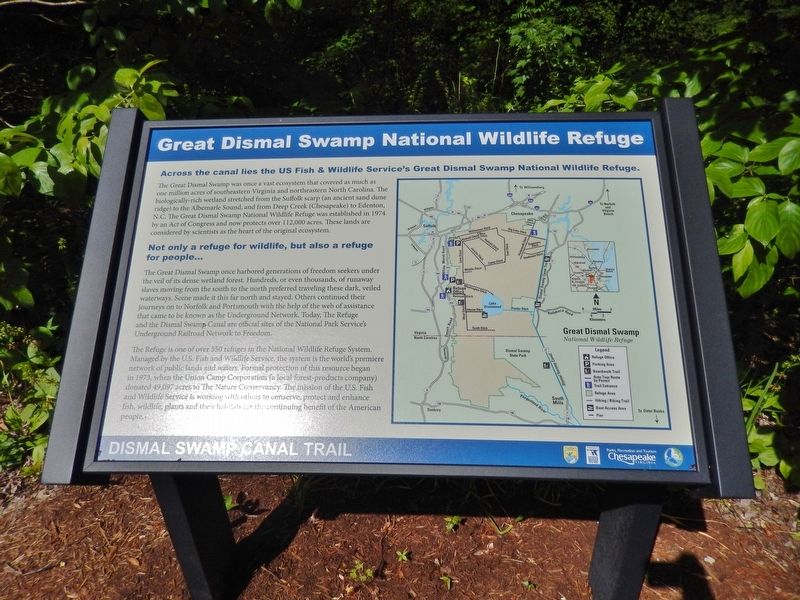 Related markers. Click here for a list of markers that are related to this marker. Dismal Swamp Canal

Also see . . .
1. Great Dismal Swamp History. Beginning in the 1660s, an established community of escaped slaves known as the Great Dismal Swamp maroons lived freely within the Great Dismal Swamp. Most maroons settled in mesic islands, the high and dry parts of the swamp. Maroons were not the only people who lived inside the swamp — some residents had bought their freedom, others were still slaves who lived semi-independently. In addition, some escaped slaves used the swamp as a stop on the Underground Railroad as they made their way further north. Nearby whites often left the maroons alone so long as they paid a quota in logs or shingles. (Submitted on March 1, 2018, by Cosmos Mariner of Cape Canaveral, Florida.)

2. History of the Dismal Swamp. The Dismal Swamp Canal, hand dug by hired enslaved labor, opened to navigation in 1805 after twelve years of backbreaking work under highly unfavorable conditions. This 22 mile long canal allowed trade between the Chesapeake Bay in Virginia and the Albemarle Sound in North Carolina. African Americans made up thirty percent of the waterman in Camden County in the 1790s and were common sights on local waterways. (Submitted on March 1, 2018, by Cosmos Mariner of Cape Canaveral, Florida.)