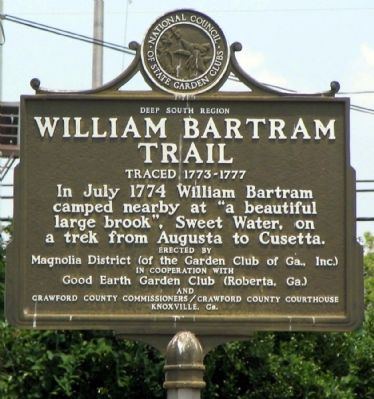 In July 1774 William Bartram camped nearby at “a beautiful large brook”, Sweet Water, on a trek from Augusta to Cusetta.

Topics and series. This historical marker is listed in these topic lists: Colonial Era • Environment • Exploration • Settlements & Settlers • Waterways & Vessels. In addition, it is included in the William Bartram Trails series list. A significant historical month for this entry is July 1774.

Location. 32° 43.454′ N, 83° 59.869′ W. Marker is in Knoxville, Georgia, in Crawford County. Marker is at the intersection of East Agency Street (Georgia Route 42) and Hartman Mill Road, on the right when traveling west on East Agency Street. The marker is at the rear of the Crawford County Courthouse. Touch for map. Marker is in this post office area: Knoxville GA 31050, United States of America. Touch for directions.

Other nearby markers. At least 8 other markers are within 7 miles of this marker, measured as the crow flies. Joanna Troutman (a few steps from this marker);