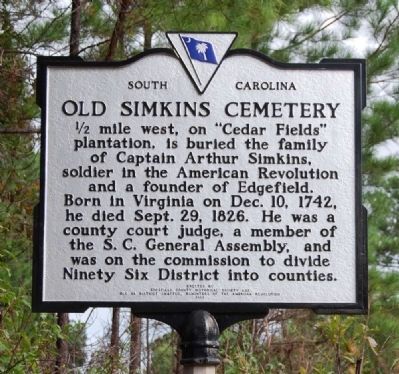 By Brian Scott, October 10, 2008
1. Old Simkins Cemetery Marker
Inscription.
Old Simkins Cemetery. . , 1/2 mile west, on "Ceder Fields" plantation, is buried the family of Captain Arthur Simkins, soldier in the American Revolution and a founder of Edgefield. Born in Virginia on Dec. 10, 1742, he died Sept. 29, 1826. He was a county court judge, a member of the S.C. General Assembly, and was on the commission to divide Ninety-Six District into counties. . This historical marker was erected in 1969 by Edgefield County Historic Society and Old 96 Chapter, Daughters of the American Revolution. It is in Edgefield in Edgefield County South Carolina

1/2 mile west, on "Ceder Fields" plantation, is buried the family of Captain Arthur Simkins, soldier in the American Revolution and a founder of Edgefield. Born in Virginia on Dec. 10, 1742, he died Sept. 29, 1826. He was a county court judge, a member of the S.C. General Assembly, and was on the commission to divide Ninety-Six District into counties.

Topics and series. This historical marker is listed in these topic lists: Agriculture • Cemeteries & Burial Sites • Colonial Era • Settlements & Settlers • War, US Revolutionary. In addition, it is included in the Daughters of the American Revolution series list. A significant historical month for this entry is September 1781. 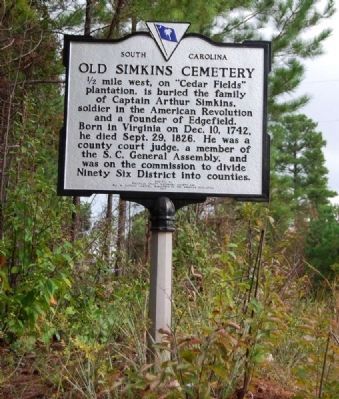 Click or scan to see
this page online
Marker is at or near this postal address: 286 Center Spring Road, Edgefield SC 29824, United States of America. Touch for directions.

Additional commentary.
1. About Arthur Simkins
In addition to having the honor of being named the "father of Edgefield", Arthur Simkins was also its first senator in Columbia, serving four consecutive terms from 1790-1806.

By Brian Scott, October 10, 2008
3. Dirt Road Leading to the Old Simkins Cemetery
The cemetery lies deep into the woods, near a fork in the road. The old plantation house once stood nearby.
His son, Eldred, was also a senator from Edgefield (1822-1826) as was his grandson, Arthur (1862-1863). During the Revolutionary War, Simkins sided with the Patriots and his plantation was burned by Tory forces. He was a delegate to the Constitutional Convention and voted against the document, believing that it took too much power from the states. His granddaughter, Eliza Simkins, was the first wife of South Carolina Governor Francis W. Pickens.

From Biographical Sketches of the Bench and Bar of South Carolina by John Belton O'Neall (1859):

"Arthur Simkins was of the most respectable class from the eastern shore of Virginia, and emigrated early in life to this part of South Carolina. He came first to the region of the Santee, but soon dissatisfied with that locality, pressed onward to the more distant and less frequented forests on the Savannah side of the State. After several years of observation, he ultimately settled a fine body of land on the waters of Log Creek, in Edgefield - a plantation, still remembered by many as 'the Cedar fields.' Here he lived and died. He was County Court Judge under the old system, and was looked up to, as a standard of worth and probity, by all who lived within the sphere of his influence...Sound in principles, and conscientious in politics, he remained a member of the General assembly for many (perhaps twenty) consecutive 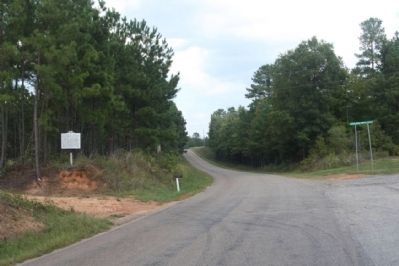 By Mike Stroud, 2011
4. Old Simkins Cemetery Marker, looking north on Center Spring Road
years, and was universally loved and respected for the simplicity, truthfulness, and sagacity of his life and character. He died, in 1826, leaving a large property. He was a Baptist in his religion, and was seldom missing from his place in the house of God, even in the years of his extreme old age."
— Submitted January 31, 2009, by Brian Scott of Anderson, South Carolina.
2. More About Arthur Simkins
There are few names that shine with a purer and better lustre; and few more deserving of honor by the people of Edgefield and of the State than that of Simkins.

Arthur Simkins, the father of Eldred [Simkins], was one of the earliest settlers in Edgefield District. He came from the Eastern Shore of Virginia and first went to the region of the Sautee, but becoming dissatisfied in a short time with that region, he went on to the less frequented forest of the Savannah side of the State. After several years of observation he settled on Log Creek. The place he settled was known for a long time, and may be still remembered by some older person as the "Cedar Fields." The writer of this has a feeling that many years ago he heard the place spoken of by that name. It was at the Cedar Fields that Arthur Simkins lived and died. He was County Judge under the old system and was regarded 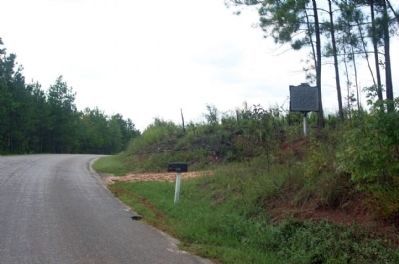 By Mike Stroud, 2011
5. Old Simkins Cemetery Marker, looking south along Center Spring Road
by all who knew him as a man of sterling worth, and as a model of honesty and uprightness.

When the Revolution broke out and the war for Independence began he took the side of Independence, and at an early period of the war the Tories burned his dwelling house, then one of the few large houses in the up-country, besides harrowing and harassing him in every other way incident to a state of civil war.

Mr. Simkins remained a member of the General Assembly for many years. He died in 1826, wealthy, honored, and respected, having done his duty as a man and citizen. (Source: History of Edgefield County: From the Earliest Settlements to 1897 by John Abney Chapman (1897), pgs 188-189.)
— Submitted 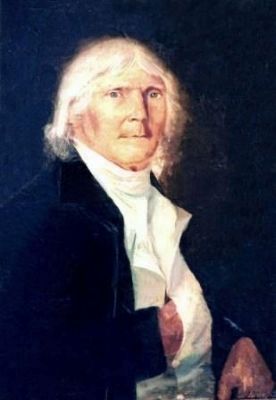 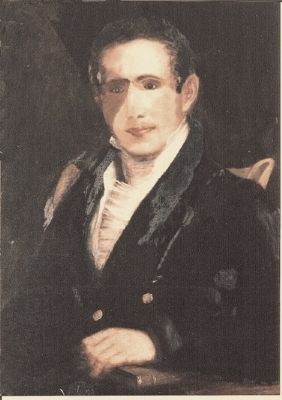 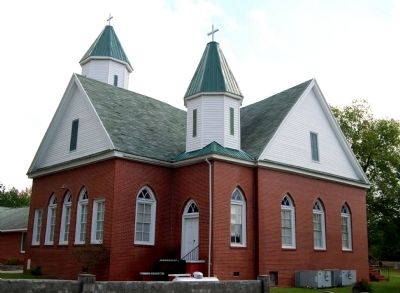 By Brian Scott, October 10, 2008
8. Simmon Ridge Missionary Baptist Church
Church is located across the street from the marker. The African-American church is built on land once part of Cedar Fields Plantation. 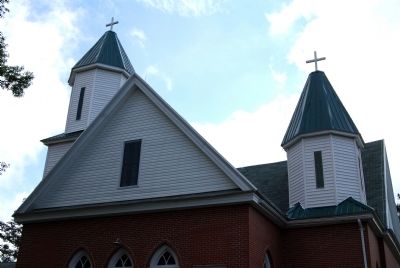 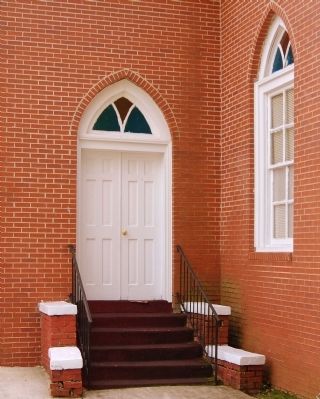 By Brian Scott, October 10, 2008
10. Simmon Ridge Missionary Baptist
Church - North Tower Entrance
Many churches in Edgefield feature spires such as this with entrances at the base. Simmon ridge features two spires, each with entrances; other churches feature double entrances on single spires. 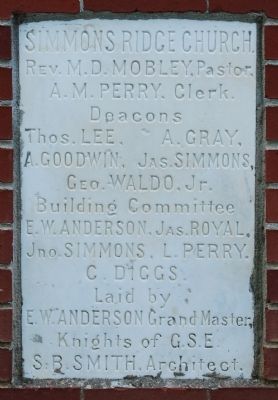 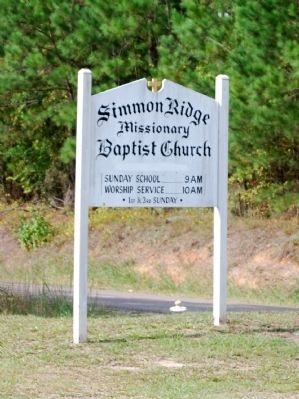 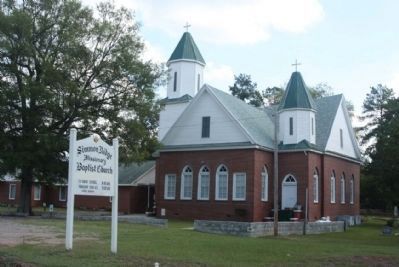