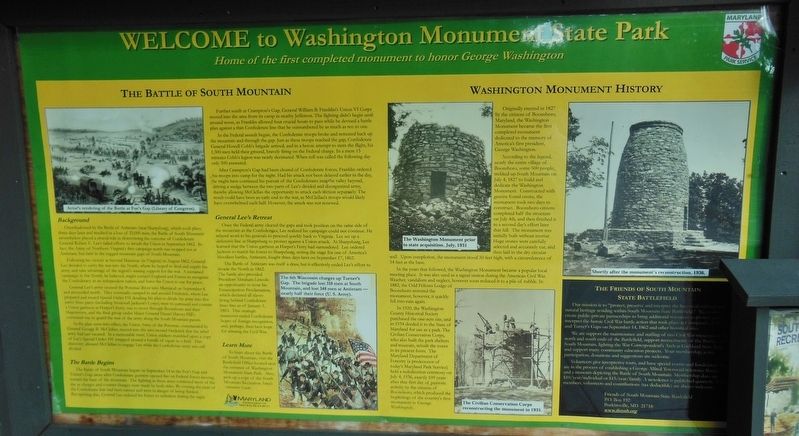 Background
Overshadowed by the Battle of Antietam (near Sharpsburg), which took place three days later and resulted in a loss of 23,000 men, the Battle of South Mountain nevertheless played a crucial role in determining the outcome of Confederate General Robert E. Lee’s failed efforts to invade the Union in September 1862. In fact, the Army of Northern Virginia’s first campaign north was stopped not at Antietam, but here in the rugged mountain gaps of South Mountain.

Following his victory at Second Manassas (in Virginia) in August 1862, General Lee decided to carry the war into the North, where he hoped to feed and supply his army and take advantage of the region’s waning support for the war. A sustained campaign in the North, he believed, might compel England and France to recognize the Confederacy as an independent nation, and force the Union to sue for peace.

General Lee’s army crossed the Potomac River into Maryland on September 4, and proceeded north. They eventually camped in and around Frederick, where Lee prepared and issued Special Order 191 detailing his plan to divide his army into five parts: 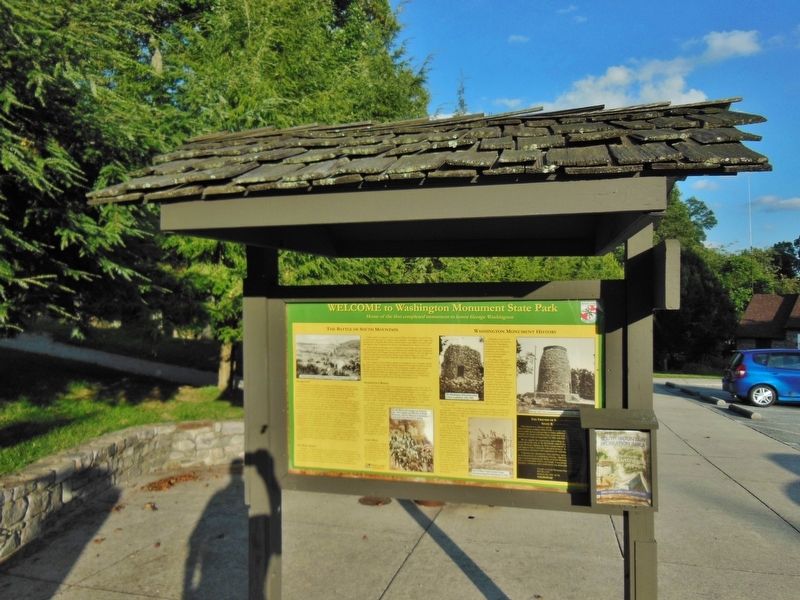 By Cosmos Mariner, September 3, 2013
2. Washington Monument State Park Marker (wide view; monument trailhead parking lot background)
three parts (including Stonewall Jackson’s Corps) were to surround and contain a Union garrison at Harper’s Ferry, was to move through Boonsboro and then Hagerstown, and the final group under Major General Daniel Harvey Hill’s command was to guard the rear of the army along the South Mountain passes.

As the plan went into effect, the Union Army of the Potomac, commanded by General George B. McClellan, moved into the area around Frederick that the rebel army had just vacated. In a memorable twist, Union soldiers stumbled upon a copy of Lee’s Special Order 191 wrapped around a bundle of cigars in a field. This discovery allowed McClellan to engage Lee while the Confederate army was still divided.

The Battle Begins
The Battle of South Mountain began on September 14 in the Fox’s Gap and Turner’s Gap areas after Confederate gunners opened fire on Federal forces moving toward the base of the mountain. The fighting in these areas continued most of the day as charges and counter charges were made by both sides. By evening the ends of the Confederate line had been turned and were in danger of being flanked. Recognizing this, General Lee ordered his forces to withdraw during the night.

Further south at Crampton's Gap, General William B. Franklin’s Union VI Corps moved into the area from its camp in nearby Jefferson. The fighting didn’t begin until

By Cosmos Mariner, September 3, 2013
3. Maryland's 1827 Washington Monument
around noon, as Franklin allowed four crucial hours to pass while he devised a battle plan against a thin Confederate line that he outnumbered by as much as ten to one.

As the Federal assault began, the Confederate troops broke and retreated back up the mountain and through the gap. Just as those troops reached the gap, Confederate General Howell Cobb’s brigade arrived, and in a heroic attempt to stem the flight, his 1,300 men held their ground, bravely firing on the Federal charge. In a mere 15 minutes Cobb’s legion was nearly decimated. When roll was called the following day only 300 answered.

After Crampton’s Gap had been cleared of Confederate forces, Franklin ordered his troops into camp for the night. Had his attack not been delayed earlier in the day, he might have continued his pursuit of the Confederates into the valley beyond, driving a wedge between the two parts of Lee’s divided and disorganized army, thereby allowing McClellan the opportunity to attack each section separately. The result could have been an early end to the war, as McClellan’s troops would likely have overwhelmed each half. However, the attack was not renewed.

General Lee’s Retreat
Once the Federal army cleared the gaps and took position on the same side of the mountain as the Confederates, Lee realized his campaign could not continue. He relayed word to his generals to proceed quickly back to Virginia. Lee set up a defensive line at Sharpsburg to protect against a Union attack. At Sharpsburg, Lee learned that the Union garrison at Harper’s Ferry had surrendered. Lee ordered Jackson to march his forces to Sharpsburg, setting the stage for one of America’s bloodiest battles, Antietam, fought three days later on September 17, 1862.

The Battle of Antietam was itself a draw, but it effectively ended Lee’s effort to invade the North in 1862. The battle also provided President Abraham Lincoln an opportunity to issue his Emancipation Proclamation, which declared all slaves living behind Confederate lines free as of January 1, 1863. This strategic maneuver ended Confederate hopes of foreign recognition, and, perhaps, their best hope for winning the Civil War.

Learn More
To learn about the Battle of South Mountain, visit the Battlefield Office located near the entrance of Washington Monument State Park. Also, pick up a copy of the South Mountain Recreation Area’s Adventure Guide.

According to the legend, nearly the entire village of Boonsboro, some 500 people, trekked up South Mountain on July 4, 1827 to build and dedicate the Washington Monument. Constructed with granite found onsite, the monument took two days to construct. Boonsboro citizens completed half the structure on July 4th, and then finished it in a second day’s effort later that fall. The monument was initially built without mortar. Huge stones were carefully selected and accurately cut, and then laid in the dry circular wall. Upon completion, the monument stood 30 feet high, with a circumference of 54 feet at the base.

In the years that followed, the Washington Monument became a popular local meeting place. It was also used as a signal station during the American Civil War. Weather, vandalism and neglect, however soon reduced it to a pile of rubble. In 1882, the Odd Fellows Lodge of Boonsboro restored the monument, however, it quickly fell into ruin again.

In 1920, the Washington County Historical Society purchased the one-acre site, and in 1934 deeded it to the State of Maryland for use as a park. The Civilian Conservation Corps, who also built the park shelters and museum, rebuilt the tower in its present form. The Maryland Department of Forestry (a predecessor of today’s Maryland Park Service) held a rededication ceremony on July 4, 1936, exactly 109 years after that first day of patriotic activity by the citizens of Boonsboro, which produced the beginnings of the country’s first monument to George Washington.

Topics and series. This historical marker is listed in these topic lists: Notable Events • Notable Places • Parks & Recreational Areas • War, US Civil. In addition, it is included in the Civilian Conservation Corps (CCC) 🏞️, and the Former U.S. Presidents: #01 George Washington series lists.

More about this marker. This is a large, framed, "poster-style" marker, mounted at eye-level in a large wooden kiosk.