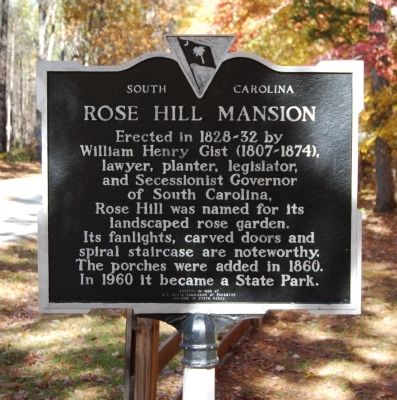 Photographed By Brian Scott, November 8, 2008
1. Rose Hill Mansion Marker
Inscription.
Rose Hill Mansion. . Erected in 1828-32 by William Henry Gist (1807-1874), lawyer, planter, legislator, and Secessionist Governor of South Carolina, Rose Hill was named for its landscaped rose garden. Its fanlights, carved doors and spiral staircases are noteworthy. The porches were added in 1860. In 1960 it became a State Park. . This historical marker was erected in 1963 by SC State Commission of Forestry, Division of State Parks. It is in Union in Union County South Carolina

Erected in 1828-32 by William Henry Gist (1807-1874), lawyer, planter, legislator, and Secessionist Governor of South Carolina, Rose Hill was named for its landscaped rose garden. Its fanlights, carved doors and spiral staircases are noteworthy. The porches were added in 1860. In 1960 it became a State Park.

Topics. This historical marker is listed in these topic lists: Agriculture • Parks & Recreational Areas • War, US Civil. A significant historical year for this entry is 1860.

Other nearby markers. At least 10 other markers are within 8 miles of this marker, measured as the crow flies. Gist Cemetery (approx. 0.8 miles away); Otterson's Fort (approx. 4.6 miles away); Padgett’s Creek Baptist Church (approx. 4.7 miles away); 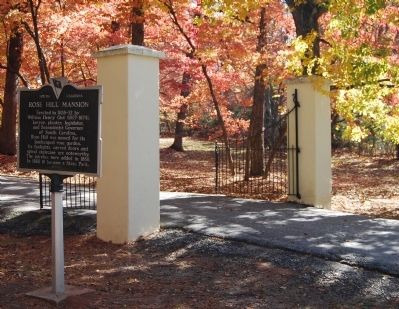 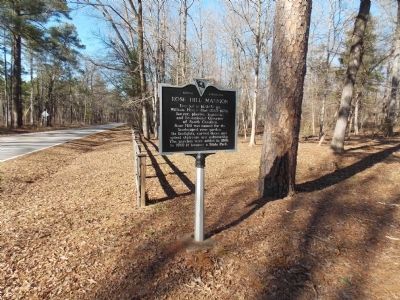 Photographed By Stanley and Terrie Howard, February 9, 2013
3. Rose Hill Mansion Marker
1. Rose Hill Plantation State Historic Site
William Henry Gist began construction on this mansion in 1828, completing it over a four-year period. Gist was only 21 years old when the house was begun. It was originally a brick Georgia home. In the early 1850s, the mansion underwent a major remodel, and the double porches, colonnades and tuck-pointed stucco were added. This changed the look of the home into the Greek Classical Revival mansion you see now.

Gist was a very successful planter, local attorney, and a staunch advocate of States Rights and Sovereignty in the mid-19th century. Elected Governor of South Carolina in 1858, Gist led the move to sever ties with the Federal government in 1860, by ordering the State Legislature to call delegates to a convention of secession to decide whether South Carolina would leave the Union. South Carolina's Secession ultimately encouraged other states to follow, forming the Confederate States of America. Thus, Gist became known as the "Secession" Governor of the state.

Abandoned by the family after the deaths of Governor and Mrs. Gist, the home was in serious disrepair by the early 20th Century. Acquired from the U.S. Forestry Commission by Clyde Franks, a Laurens businessman, the home was restored over an eighteen year period and became a State Park in 1960.

Rose Hill is an ideal place to investigate South 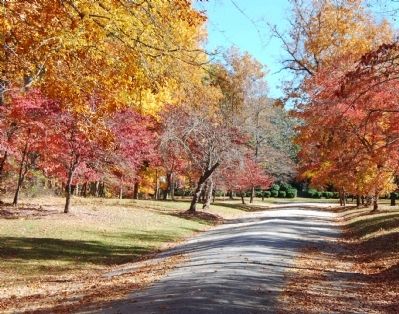 Photographed By Brian Scott, November 8, 2008
4. Tree Lined Drive to Rose Hill
Carolina's antebellum history, the lifestyles of prosperous Upstate planter families. cotton production, the lives of enslaved African Americans and tenant farming of South Carolina's past. Today, when touring the home, you can see original woodwork, period furnishings, artifacts belonging to the Gist family, and the ongoing preservation of this historically significant part of South Carolina's history and legacy. (Source: Brochure available on site.)
— Submitted November 11, 2008, by Brian Scott of Anderson, South Carolina.
2. About Rose Hill Plantation
Gist built the home in 1832, naming it Rose Hill after the rose garden he planted for his wife. The garden still exists in back of the house. Gist also planted the magnolia trees and boxwoods in front of the house. The plants are laid out in a maze pattern popular in English-style gardens in the 1860s.

Gist, a planter and slave holder, was an ardent secessionist. It ran in the family. His cousin was Confederate Brigadier General States Rights Gist, a name that was somewhat common for men born during the 1830s.

William Gist was South Carolina's governor the two years before the state seceded, and he lobbied hard for secession during his term of office. He often visited other governors to ask for their support. 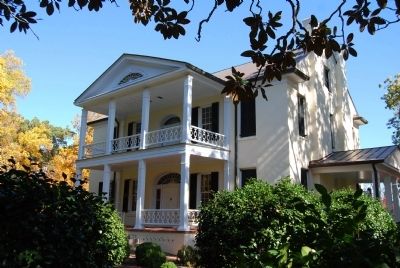 Photographed By Brian Scott, November 8, 2008
5. Rose Hill Mansion -
Front (West) Side
He finally made his case, but too late for him to have the honor of being governor when South Carolina finally left the union on December 20, 1860. Gist signed the Ordinance of Secession as just another private citizen.

There is one odd thing about Gist's signing of the Ordinance. In 1776, a proud John Hancock signed the Declaration of Independence in very large letters so King George of England could read it. Former Governor Gist' signature on South Carolina's Ordinance of Secession is one of the smallest ones on the document. The man spent his entire term of office lobbying for secession, but his signature is tiny compared to other names. (Source: Touring the Carolina's Civil War Sites by Clint Johnson, pg. 327.)
— Submitted March 7, 2009, by Brian Scott of Anderson, South Carolina.
3. More About Rose Hill
Close adherence to Greek prototype. Three-story, stuccoed brick walls 28 inches thick, white woodwork, black-green shutters, front and rear piazzas, fanlights. Original kitchen burned in the late 19th century.

Ballroom on third floor was built with two fireplaces 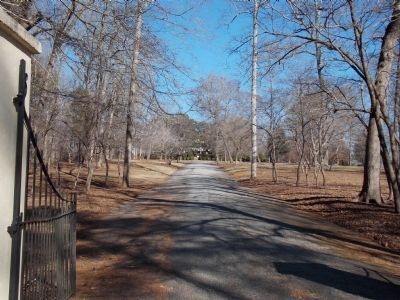 Photographed By Stanley and Terrie Howard, February 9, 2013
6. Rose Hill Mansion Marker
so could be used as two bedrooms to accomodate the constant visitors. House is surrounded by boxwoods, rose gardens and magnolias, enclosed by cast-iron fence. Present - Rose Hill State Park comprising house, out buildings and forty-four acres of land.

Statement of Significance: Built between 1828 and 1832. After 1860, brick was covered with stucco and the two-story back and front piazzas were added. More refined ornamentation than usual in Up Country houses of the period.

William H. Gist, builder and owner, represented the Union District in the South Carolina Legislature 1840-1844, and in the South Carolina Senate 1844-1856. he served as Senator and Lieutenant Governor 1848-1850 and Governor 1858-1860. He effected the Secession Convention which brought about the Ordinance of Secession, which he signed. (Source: National Register nomination form.)
— Submitted July 9, 2009, by Brian Scott of Anderson, South Carolina.
4. Rose Hill Plantation
2677 Sardis Road
Union, SC 29379

The house at Rose Hill Plantation is one of South Carolina's best examples of a Federal-style home that was renovated in the 1850s to the then-modern Greek Revival style. The original house was built in 1832 by William Henry Gist. A classic four-over-four Federal-style 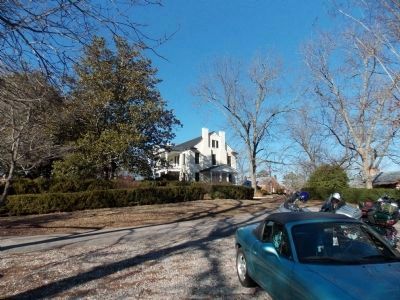 Photographed By Stanley and Terrie Howard, February 9, 2013
7. Rose Hill Mansion Marker
house, it featured an all-brick facade, exterior chimneys at each end, and a wood-shingle roof.

The Federal style incorporated simple lines and symmetry, but by the 1850s it was considered outdated. The newer Green Revival style, championed first in England, then brought across the Atlantic, was felt to represent the highest ideals of humankind. It also conveniently lent itself to displaying the newfound wealth of a rapidly growing nation.

Around 1850, Gist and his wife, Mary, began a major renovation of their home. They added porticos on three sides. The front and rear porticos were two stories tall and topped by pediments; they had graceful columns supporting wrought-iron railed balconies at the second floor. Pediments were also added to the gable ends of the house. The exterior walls were covered with stucco, primarily for decorative purposes, but also to waterproof the brick. Lastly, the oak-shingle roof was replaced with tin.

Today, the Rose Hill house is surrounded by the dense woodlands of the Sumter National Forest, but in the 1840s, the cultivated land of numerous plantations stretched along the banks of the Tyger River and across the surrounding rolling terrain. Rose Hill, like its neighbors, was an Up Country plantation that grew hardy, short-fiber Upland cotton, as well as raining cattle and growing all the produce the local population required. 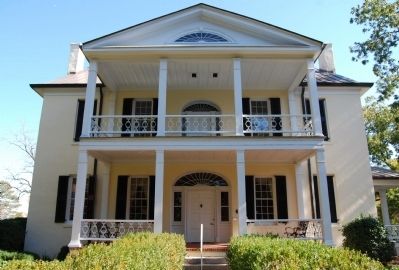 Photographed By Brian Scott, November 8, 2008
8. Rose Hill Mansion -
Front (West) Elevation
Gist was elected governor of South Carolina in 1858, the Rose Hill house became the governor's mansion. Gist was the last governor to undertake his duties from his personal residence. Politically, he was an avid secessionist and made throwing off the mantle of the federal government the central theme of his term. At one point, he sent his cousin and trusted aid, States Rights Gist (yes, his given name really was States Rights, proving that William Gist was not the family's only ardent secessionist) to other surrounding Southern states offering support should they vote to secede.

When Abraham Lincoln was elected president, it provided just the ammunition William Gist was looking for, and he called a special meeting of the State Assembly to draft South Carolina's response. On December 20, 1860, five days after Gist's term ended, South Carolina officially announced its secession from the United States.

Gist continued to life at Rose Hill house until his death in 1874. in the twentieth century, the house fell into disrepair, and in 1940 it was slated to become a bombing target for planes from nearby Shaw Air Force Base. Last-minute work on the part of local preservationists kept the house from this date.

Today, Rose Hill is operated as a state park open to the public. The house has been fully renovated and furnished with period antiques, including many objects 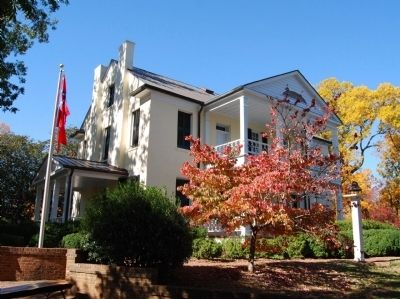 In the two decades preceding the Civil War, four governors of South Carolina were considered major slave owners in 1860. They were: 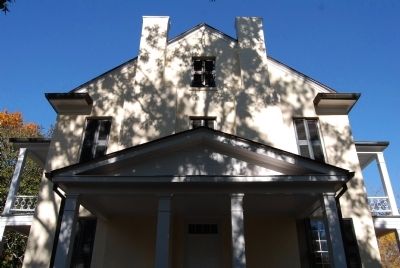 Photographed By Brian Scott, November 8, 2008
10. Rose Hill Mansion -
South Side
Big House: Elite Slaveholders of the Mid-Nineteenth-Century South by William Kauffman Scarborough (2003) pg 240.)
— Submitted July 10, 2009, by Brian Scott of Anderson, South Carolina.
6. Hauntings at Rose Hill
The area around Rose Hill State Park itself has its own share of legends. These tales are depicted in an October 2001 article from the Union Grapevine, a free newsletter. One story concerns mysterious lights that appear in the nearby woods just after dawn. Hunters claim that the light resembles a man on horseback carrying a lantern. Those who have seen the light believe it is Governor Gist, still making his morning rounds. Since legend has it that his horse was buried next to him, it is possible that this figure is him.

There is another story concerning the Gist family and the area around Rose Hill. Prior to the Civil War, one of Governor Gist's daughters and a slave companion were out berry picking near what is now Sardis Road. A carriage came along and, for whatever reason, the horses were spooked. The daughter dove into the woods unharmed, but the slave girl was killed. Drivers along that road reported seeing two girls along the roadside, then witnessing the white child dive into the woods while the black girl vanishes. (Source: Ghosts of the 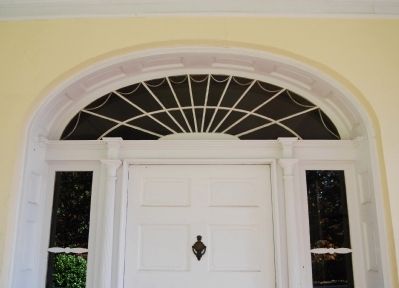 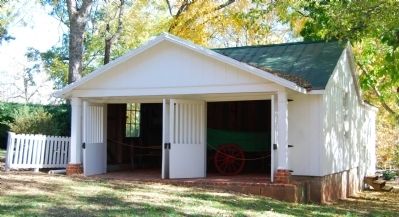 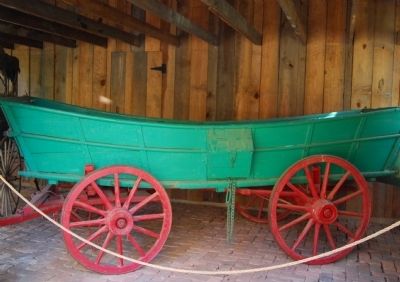 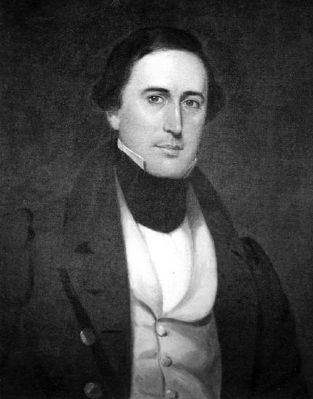 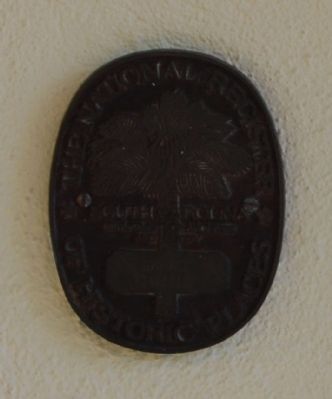 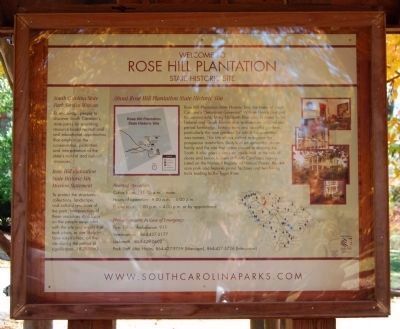 Photographed By Brian Scott, November 8, 2008
16. Rose Hill Mansion State Historic Site
Rose Hill Plantation State Historical Site, the home of South Carolina's "Secession Governor" William Henry Gist and his second wife, Mary Elizabeth Rice Gist, is noted for its Federal and Greek Revival style architecture, original and period furnishing, historic trees and beautiful gardens, particularly the rose gardens for which the plantation was named. This site allows visitors to explore the prosperous antebellum lifestyle of an upcountry planter family and the role that cotton played in shaping the South. It also gives visitors an inside look at the role of slaves and tenant farmers in South Carolina's history. Listed in the National Register of Historic Places, this 44-acre park also features picnic facilities and two hiking trails leading to the Tyger River. 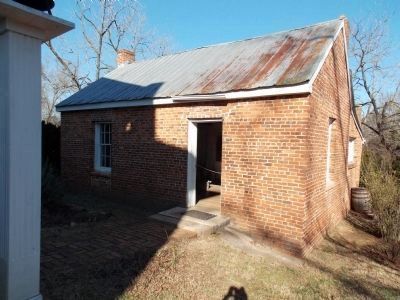 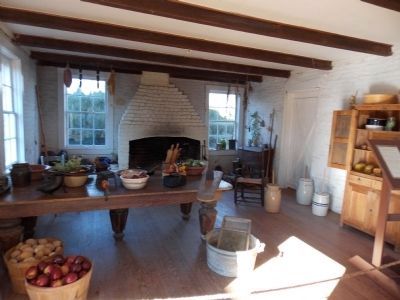 Photographed By Stanley and Terrie Howard, February 9, 2013
18. Inside Platation Kitchen 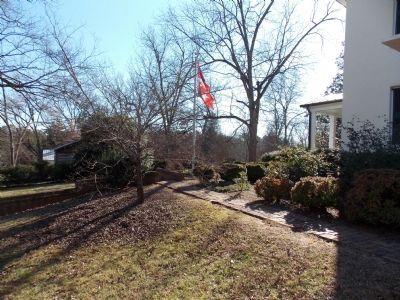 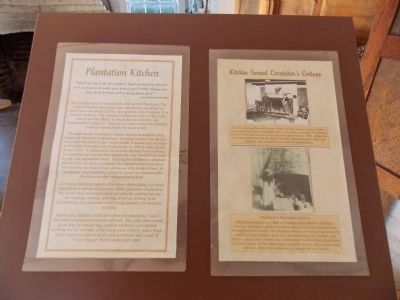 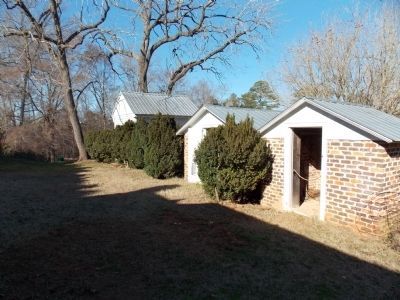 Photographed By Stanley and Terrie Howard, February 9, 2013
21. The Smoke House in the middle 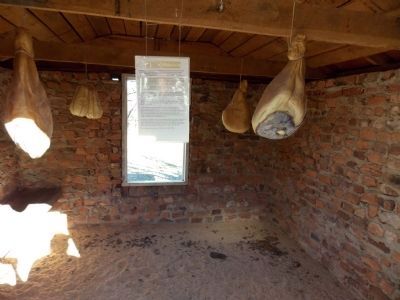 Photographed By Stanley and Terrie Howard, February 9, 2013
22. The Smoke House 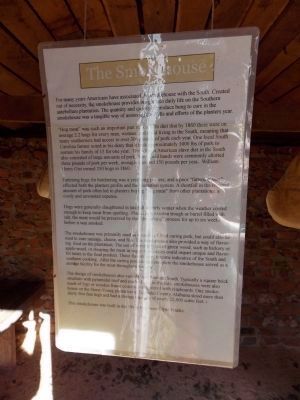 Photographed By Stanley and Terrie Howard, February 9, 2013
23. The Smoke House 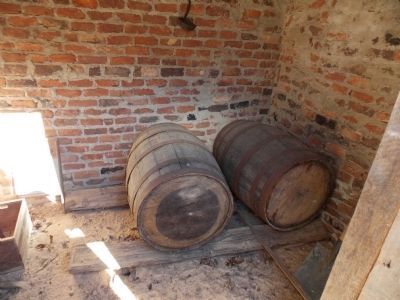 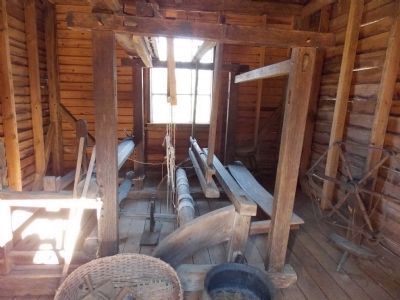 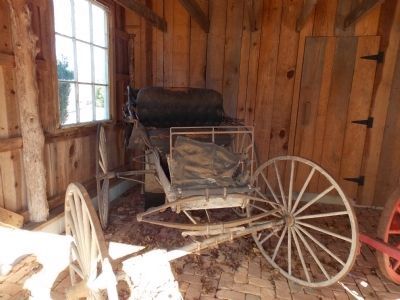 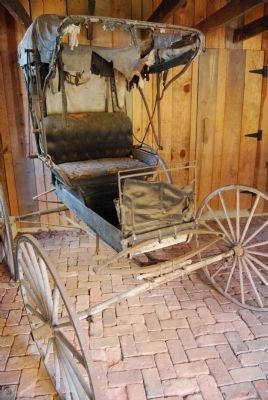