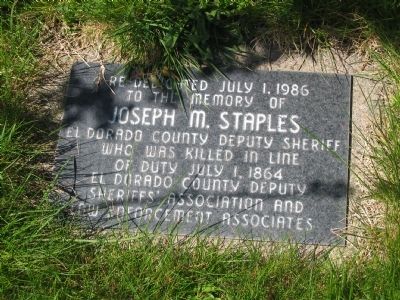 Re-Dedicated July 1, 1986
To The Memory of
Joseph M. Staples
El Dorado County Deputy Sheriff
Who Was Killed In The Line
Of Duty July 1, 1864

Location. 38° 43.867′ N, 120° 48.467′ W. Marker is in Placerville, California, in El Dorado County. Marker can be reached from Bee Street. Marker and Gravesite of Joseph M. Staples are located at the Union Cemetery. Touch for map. Marker is in this post office area: Placerville CA 95667, United States of America. Touch for directions.

Other nearby markers. At least 8 other markers are within walking distance of this marker. Placerville (about 400 feet away, measured in a direct line); Bee-Bennett House (about 500 feet away); Site of Original Raley’s Grocery Store (approx. ¼ mile away); Site of Placerville Drive In Market (approx. 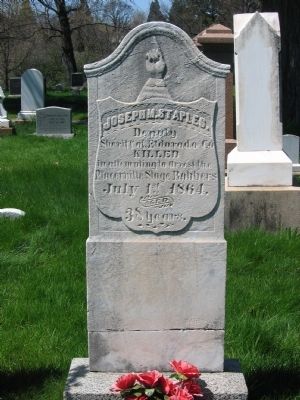 Additional commentary.
1. End of Watch: July 1, 1864
A group of outlaws had robbed the Comstock stages on the Placerville Road. A posse was formed at the Cary House in Placerville. Deputy Staples, a well-liked Irishman who lived in Coloma and was a member of the Neptune Company of the Placerville fire brigade, would lead the team. Staples, Van Eaton and Ranney rode south to Diamond Springs, where they turned east and began working their way along the Pleasant Valley Road. Deputy Staples discovered the robbers held up in the Somerset House, a large hotel on the north fork of the Cosumnes River where they spent the night. In the morning, two of Sheriff Rogers' deputies, Joseph Staples and George Ranney, rode up asking Mrs. Reynolds, the proprietor, if she had seen any strangers around. She nodded her head and motioned them to a side door. Deputy Staples rushed into the 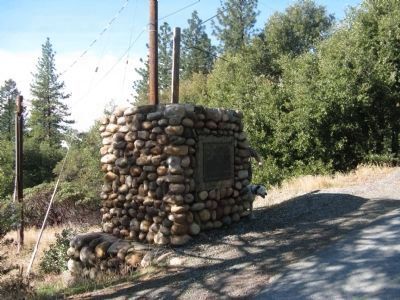 Photographed By Syd Whittle, November 28, 2008
3. In Memory of the Bravery of Our Pioneer Officers Marker
Site of the Stage Robbery, Pollack Pines, Ca.
Click for more information.
room yelling, "You men are all my prisoners!" whereupon he was met by a barrage of gunfire, killing him instantly.
— Submitted November 29, 2008, by Syd Whittle of Mesa, Arizona. 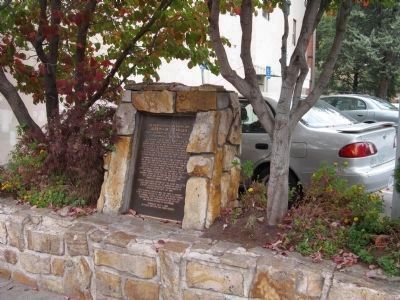 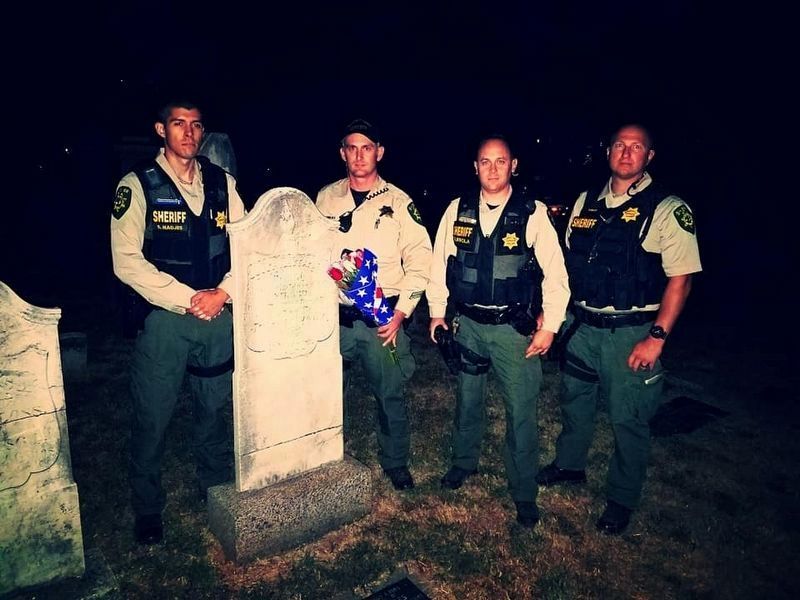