In Memory of Clara Barton 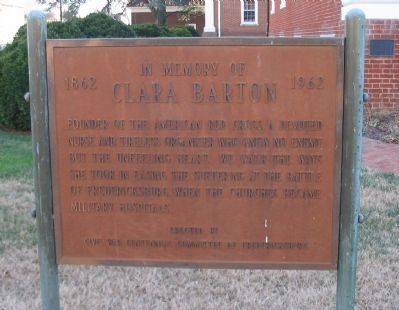 By Craig Swain, December 13, 2008
1. Clara Barton Marker
Inscription.
In Memory of Clara Barton. Founder of the American Red Cross. A devoted nurse and tireless organizer who knew no enemy but the unfeeling heart. We walk the ways she took in easing the suffering at the Battle of Fredericksburg when the churches became military hospitals. . This historical marker was erected in 1962 by Civil War Centennial Committee of Fredericksburg. It is in Fredericksburg Virginia

Founder of the American Red Cross. A devoted nurse and tireless organizer who knew no enemy but the unfeeling heart. We walk the ways she took in easing the suffering at the Battle of Fredericksburg when the churches became military hospitals.

Topics and series. This historical marker is listed in these topic lists: Charity & Public Work • Science & Medicine • War, US Civil • Women. In addition, it is included in the Clara Barton series list. A significant historical year for this entry is 1862. 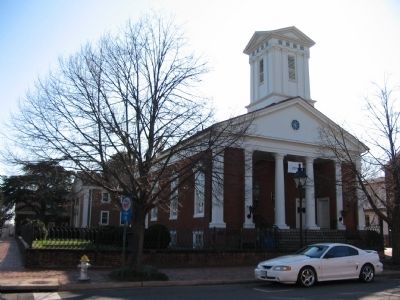 By Craig Swain, December 13, 2008
2. Marker in front of the Presbyterian Church
The Church, like most others in Fredericksburg, was used as a hospital during the 1862 battle of Fredericksburg. The church was also used by the Federals in 1864. 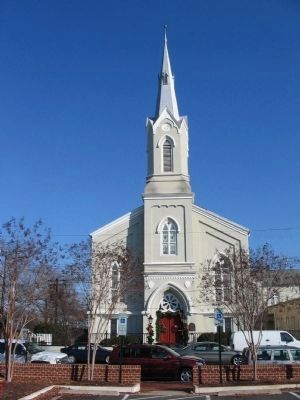 By Craig Swain, December 13, 2008
3. Fredericksburg Baptist Church
Another of Fredericksburg's Churches turned into a field hospital during the 1862 battle. 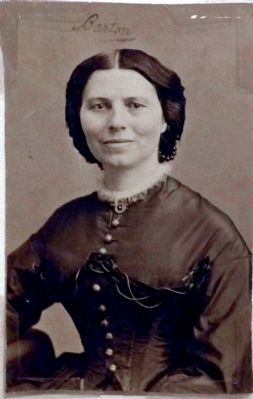 By Allen C. Browne, February 16, 2015
4. Clara Barton
This c. 1865 photo of Clara Barton by Mathew B. Brady hangs in the National Portrait Gallery in Washington, DC.

“Clara Barton considered herself foremost a relief worker, whose efforts to aid those in need consumed most of her adult life. Yet she is remembered best as a Civil War nurse and as the founder of the American Red Cross. During the war; Barton realized her true calling of service by organizing and distributing supplies to Union soldiers and visiting the fields of battle as an independent nurse. At war's end; she organized a missing soldiers office, answering thousands of inquiries from bereaved families about their loved ones. When she closed the office in 1867, she had identified the fate of some 22,000 men. Later, after attending a European meeting of the International Red Cross, Barton returned home and worked to found the American Red Cross in 1881. She served as its first president for the next twenty-three years.” — National Portrait Gallery
Credits. This page was last revised on July 22, 2020. It was originally submitted on December 14, 2008, by Craig Swain of Leesburg, Virginia. This page has been viewed 1,581 times since then and 9 times this year. Photos:   1, 2, 3. submitted on December 14, 2008, by Craig Swain of Leesburg, Virginia.   4. submitted on May 24, 2015, by Allen C. Browne of Silver Spring, Maryland.
Share This Page.