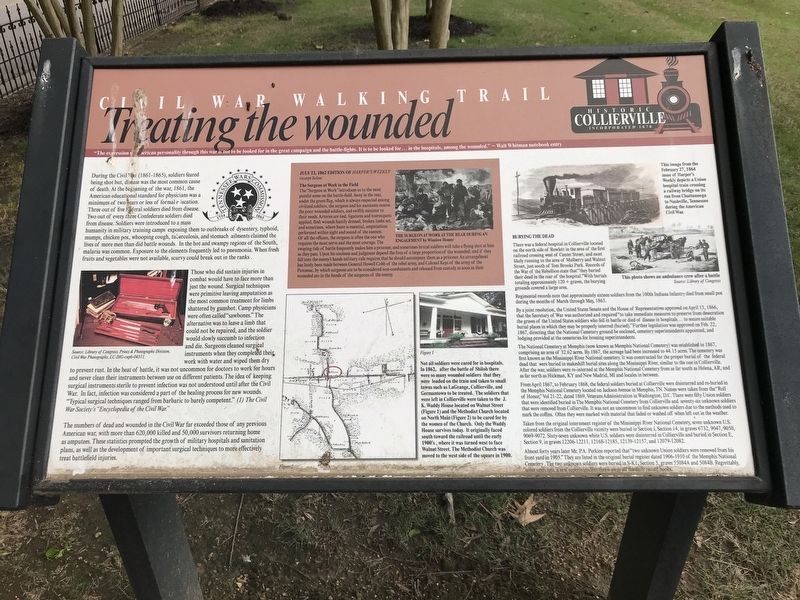 During the Civil War (1861-1865), soldiers feared being shot but, disease was the most common cause of death. At the beginning of the war, 1861, the American educational standard for physicians was a minimum of two years or less of formal education. Three out of five Federal soldiers died from disease. Two out of every three Confederate soldiers died from disease. Soldiers were introduced to a mass humanity in military training camps exposing them to outbreaks of dysentery, typhoid, mumps, chicken pox, whooping cough, tuberculosis, and stomach ailments claimed the lives of more men than did battle wounds. In the hot and swampy regions of the South, malaria was common. Exposure to the elements frequently led to pneumonia. When fresh fruits and vegetables were not available, scurvy could break out in the ranks.

Those who did sustain injuries in combat would have to face more than just the wound. Surgical 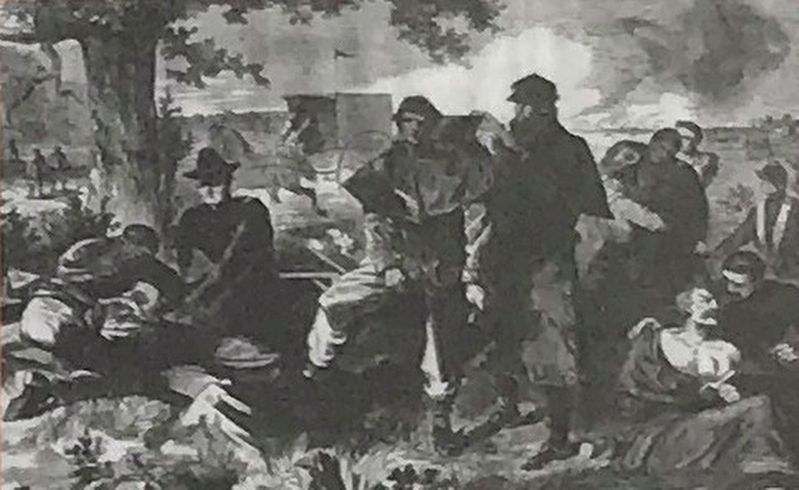 By Duane and Tracy Marsteller, April 25, 2020
2. Treating the Wounded Marker
Closeup: The surgeon at work at the rear during an engagement. By Winslow Homer

Click or scan to see
this page online
techniques were primitive leaving amputation as the most common treatment for limbs shattered by gunshot. Camp physicians were often called "sawbones.” The alternative was to leave a limb that could not be repaired, and the soldier would slowly succumb to infection and die. Surgeons cleaned surgical instruments when they completed their work with water and wiped them dry to prevent rust. In the heat of battle, it was not uncommon for doctors to work for hours and never clean their instruments between use on different patients. The idea of keeping surgical instruments sterile to prevent infection was not understood until after the Civil War. In fact, infection was considered a part of the healing process for new wounds. "Typical surgical techniques ranged from barbaric to barely competent." (1) The Civil War Society's 'Encyclopedia of the Civil War."

The numbers of dead and wounded in the Civil War far exceeded those of any previous American war, with more than 620,000 killed and 50,000 survivors returning home as amputees. These statistics prompted the growth of military hospitals and sanitation plans, as well as the development of important surgical techniques to more effectively treat battlefield injuries.

By Duane and Tracy Marsteller, April 25, 2020
3. Treating the Wounded Marker
Closeup: This image from the February 27, 1864 issue of Harper's Weekly depicts a Union hospital train crossing a railway bridge on its run from Chattanooga to Nashville, Tennessee during the American Civil War.
first railroad crossing west of Center Street, and most likely running to the area of Mulberry and Walnut Street, just south of Tom Brooks Park. Records of the War of the Rebellion state that “they buried their dead in the rear of the hospital." With burialstotaling approximately 120+ graves, the burying grounds covered a large area.

Regimental records note that approximately sixteen soldiers from the 100th Indiana Infantry died from small pox during the months of March through May, 1863.

By a joint resolution, the United States Senate and the House of Representatives approved on April 13, 1866, that the Secretary of War was authorized and required "to take immediate measures to preserve from desecration the graves of the United States soldiers who fell in battle or died of disease in hospitals... to secure suitable burial places in which they may be properly interred (buried)." Further legislation was approved on Feb. 22, 1867, directing that the National Cemetery ground be enclosed, cemetery superintendents appointed, and lodging provided at the cemeteries for housing superintendents.

The National Cemetery at Memphis (now known as Memphis National Cemetery) was established in 1867, comprising an area of 32.62 acres. By 1867, the acreage had been increased to 44.15 acres. The cemetery was first known as the Mississippi River National cemetery.

By Duane and Tracy Marsteller, April 25, 2020
4. Treating the Wounded Marker
Closeup: This photo shows an ambulance crew after a battle. Source: Library of Congress
It was constructed for the proper burial of the federal dead that were buried in makeshift burial sites along the Mississippi River, similar to the one in Collierville. After the war, soldiers were re-interned at the Memphis National Cemetery from as far south as Helena, AR, and as far north as Hickman, KY and New Madrid, MI and locales in between.

From April 1867, to February 1868, the federal soldiers buried at Collierville were disinterred and re-buried in the Memphis National Cemetery located on Jackson Avenue in Memphis, TN. Names were taken from the "Roll of Honor,” Vol 21-22, dated 1869, Veterans Administration in Washington, D.C. There were fifty Union soldiers that were identified buried in The Memphis National Cemetery from Collierville and seventy-six unknown soldiers that were removed from Collierville. It was not an uncommon to find unknown soldiers due to the methods used to mark the coffins. Often they were marked with material that faded or washed off when left out in the weather. 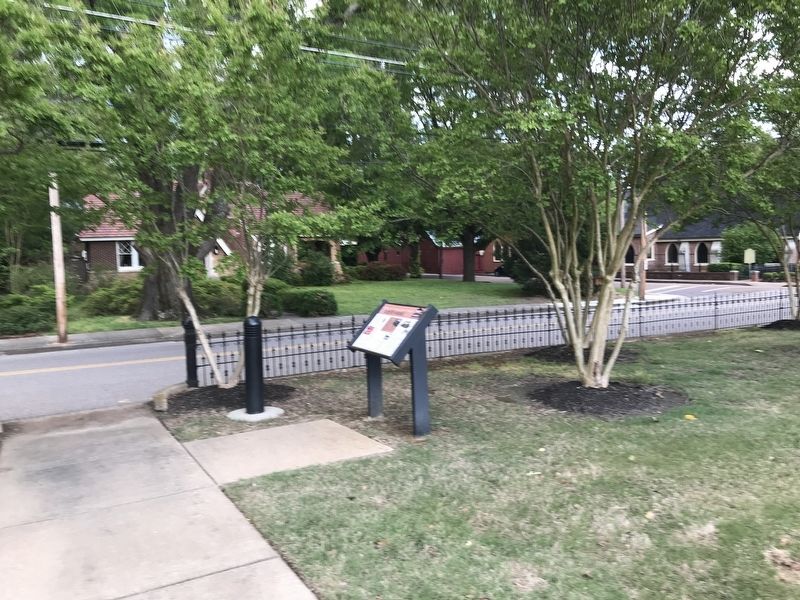 Almost forty years later Mr. P.A. Perkins reported that"two unknown Union soldiers were removed from his front yard in 1905.” They are listed in the original burial register dated 1906-1910 of the Memphis National Cemetery.The two unknown soldiers were buried in S-K1, Section 5, graves 55084A and 5084B. Regrettably, some years ago, a new superintendent threw away all the daily record books.

The Surgeon at Work in the Field
The "Surgeon at Work"introduces us to the most painful scene on the battle-field. Away in the rear, under the green flag, which is always respected among civilized soldiers, the surgeon and his assistants receive the poor wounded soldiers, and swiftly minister to their needs. Arteries are tied, ligatures and tourniquets applied, flesh wounds hastily dressed, broken limbs set, and sometimes, where haste is essential, amputations performed within sight and sound of the cannon. Of all the officers, the surgeon is often the one who requires the most nerve and the most courage. The swaying tide of battle frequently makes him a prisoner, and sometimes brutal soldiers will take a flying shot at him as they pass. Upon his coolness and judgment depend the lives of a large proportion of the wounded; and if they fall into the enemy's hands military rule requires that he should accompany them as a prisoner. An arrangement has lately been made between General Howell Cobb of the rebel army, and Colonel Keys of the army of the Potomac, by which surgeons are to be considered non-combatants and released from custody as soon as their wounded are in the hands of the surgeons of the enemy.

Not all soldiers were cared for in hospitals. In 1862, after the battle of Shiloh there were so many wounded soldiers that they were loaded on the train and taken to small towns such as LaGrange, Collierville, and Germantown to be treated. The soldiers that were left in Collierville were taken to the J.K. Waddy House located on Walnut Street (Figure 1) and the Methodist Church located on North Main (Figure 2) to be cared for by the women of the Church. Only the Waddy House survives today. It originally faced south toward the railroad until the early 1900's, where it was turned west to face Walnut Street. The Methodist Church was moved to the west side of the square in 1900.

This image from the February 27, 1864 issue of Harper's Weekly depicts a Union hospital train crossing a railway bridge on its run from Chattanooga to Nashville, Tennessee during the American Civil War.

This photo shows an ambulance crew after a battle Source: Library of Congress

Topics and series. This historical marker is listed in these topic lists: Cemeteries & Burial Sites • Science & Medicine • War, US Civil. In addition, it is included in the Walt Whitman 🏳️‍🌈 series list.

Location. 35° 2.6′ N, 89° 40.006′ W. Marker is in Collierville, Tennessee, in Shelby County. Marker is on Walnut Street north of West Mulberry Street, on the right when traveling south. Marker is located in Tom Brooks Park. Touch for map. Marker is at or near this postal address: 151 Walnut Street, Collierville TN 38017, United States of America. Touch for directions.