The North's Most Legendary Warrior 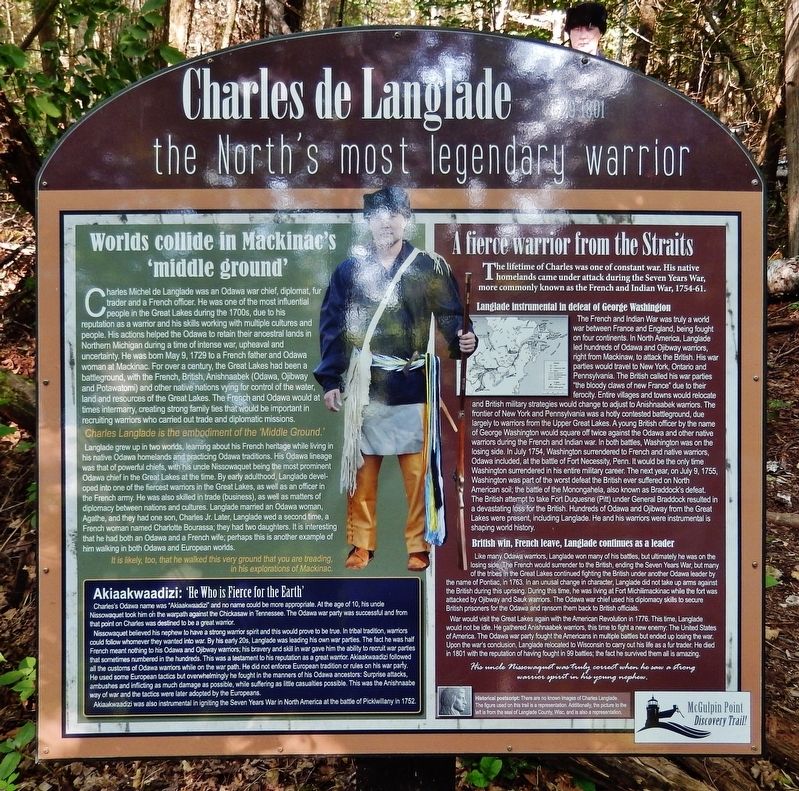 Worlds collide in Mackinac’s “Middle Ground”
Charles Michel de Langlade was an Odawa war chief, diplomat, fur trader and a French officer. He was one of the most influential people in the Great Lakes during the 1700s, due to his reputation as a warrior and his skills working with multiple cultures and people. His actions helped the Odawa to retain their ancestral lands in Northern Michigan during a time of intense war, upheaval and uncertainty. He was born May 9, 1729 to a French father and Odawa woman at Mackinac. For over a century, the Great Lakes had been a battleground, with the French, British, Anishnaabek (Odawa, Ojibway and Potawatomi) and other native nations vying for control of the water, land and resources of the Great Lakes. The French and Odawa would at times intermarry, creating strong family ties that would be important in recruiting warriors who carried out trade and diplomatic missions.

Charles Langlade is the embodiment of the “Middle Ground.”
Langlade grew up in two worlds, learning about his French heritage while living in his native Odawa homelands and practicing Odawa traditions. 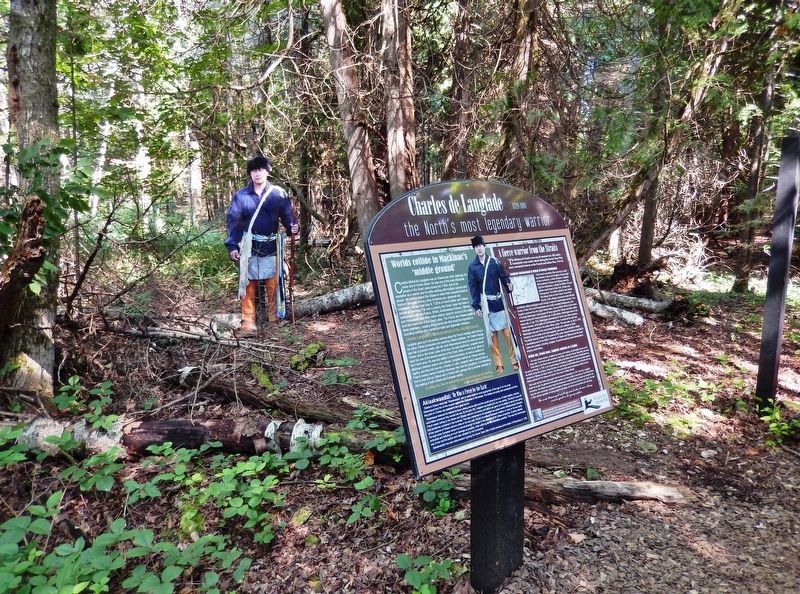 Click or scan to see
this page online
His Odawa lineage was that of powerful chiefs, with his uncle Nissowaquet being the most prominent Odawa chief in the Great Lakes at the time. By early adulthood, Langlade developed into one of the fiercest warriors in the Great Lakes, as well as an officer in the French army. He was also skilled in trade (business), as well as matters of diplomacy between nations and cultures. Langlade married an Odawa woman, Agathe, and they had one son, Charles Jr. Later, Langlade wed a second time, a French woman named Charlotte Bourassa; they had two daughters. It is interesting that he had both an Odawa and a French wife; perhaps this is another example of him walking in both Odawa and European worlds.

It is likely, too, that he walked this very ground that you are treading, in his explorations of Mackinac.

Akiaakwaadizi: "He Who is Fierce for the Earth"
Charles's Odawa name was "Akiaakwaadizi" and no name could be more appropriate. At the age of 10, his uncle Nissowaquet took him on the warpath against the Chickasaw in Tennessee. The Odawa war party was successful and from that point on Charles was destined to be a great warrior.

Nissowaquet believed his nephew to have a strong warrior spirit and this would prove to be true. In tribal tradition, warriors could follow whomever they wanted into war. By his early 20s, Langlade was leading his own war parties. The fact he was half French meant nothing to his Odawa and Ojibway warriors; his bravery and skill in war gave him the ability to recruit war parties that sometimes numbered in the hundreds. This was a testament to his reputation as a great warrior. Akiaakwaadizi followed all the customs of Odawa warriors while on the war path. He did not enforce European tradition or rules on his war party. He used some European tactics but overwhelmingly he fought in the manners of his Odawa ancestors: Surprise attacks, ambushes and inflicting as much damage as possible, while suffering as little casualties possible. This was the Anishnaabe way of war and the tactics were later adopted by the Europeans.

Akiaakwaadizi was also instrumental in igniting the Seven Years War in North America at the battle of Pickiwillany in 1752.

A fierce warrior from the Straits
The lifetime of Charles was one of constant war. His native homelands came under attack during the Seven Years War, more commonly known as the French and Indian War, 1754-61.

Langlade instrumental in defeat of George Washington
The French and Indian War was truly a world war between France and England, being fought on four continents. In North America, Langlade led hundreds of Odawa and Ojibway warriors, right from Mackinaw, to attack the British. His war parties would travel to New York, Ontario and Pennsylvania. The British called his war parties "the bloody claws of new France" due to their ferocity. Entire villages and towns would relocate and British military strategies would change to adjust to Anishnaabek warriors. The frontier of New York and Pennsylvania was a hotly contested battleground, due largely to warriors from the Upper Great Lakes. A young British officer by the name of George Washington would square off twice against the Odawa and other native warriors during the French and Indian war. In both battles, Washington was on the losing side. In July 1754, Washington surrendered to French and native warriors, Odawa included, at the battle of Fort Necessity, Penn. It would be the only time Washington surrendered in his entire military career. The next year, on July 9, 1755, Washington was part of the worst defeat the British ever suffered on North American soil; the battle of the Monongahela, also known as Braddock's defeat. The British attempt to take Fort Duquesne (Pitt) under General Braddock resulted in a devastating loss for the British. Hundreds of Odawa and Ojibway from the Great Lakes were present, including Langlade. He and his warriors were instrumental in shaping world history.

British win, French leave, Langlade continues as a leader
Like many Odawa warriors, Langlade won many of his battles, but ultimately he was on the losing side. The French would surrender to the British, ending the Seven Years War, but many of the tribes in the Great Lakes continued fighting the British under another Odawa leader by the name of Pontiac, in 1763. In an unusual change in character, Langlade did not take up arms against the British during this uprising. During this time, he was living at Fort Michilimackinac while the fort was attacked by Ojibway and Sauk warriors. The Odawa war chief used his diplomacy skills to secure British prisoners for the Odawa and ransom them back to British officials.

War would visit the Great Lakes again with the American Revolution in 1776. This time, Langlade would not be idle. He gathered Anishnaabek warriors, this time to fight a new enemy: The United States of America. The Odawa war party fought the Americans in multiple battles but ended up losing the war. Upon the war's conclusion, Langlade relocated to Wisconsin to carry out his life as a fur trader. He died in 1801 with the reputation of having fought in 99 battles; the fact he survived them all is amazing.

His uncle Nissowaquet was truly correct when he saw a strong warrior spirit in his young nephew.

Historical postscript: There are no known images of Charles Langlade. The figure used on this trail is a representation. Additionally, the picture to the left is from the seal of Langlade County, Wisc. and is also a representation.

Topics and series. This historical marker is listed in these topic lists: Colonial Era • Native Americans • War, French and Indian • War, US Revolutionary. In addition, it is included in the Former U.S. Presidents: #01 George Washington series list. A significant historical date for this entry is May 9, 1729.

Location. 45° 47.268′ N, 84° 46.351′ W. Marker is in Mackinaw City, Michigan, in Emmet County. Marker can be reached from Headlands Road north of McGulpin Point Road, on the right when traveling north. Marker is located along the Discovery Trail at McGulpin Point Lighthouse & Historic Site. Touch for map. Marker is at or near this postal address: 500 Headlands Road, Mackinaw City MI 49701, United States of America. Touch for directions.

Related markers. Click here for a list of markers that are related to this marker. Discovery Trail to the Straits of Mackinac

Also see . . .
1. Discovery Trail to the Straits of Mackinac. Odawa warrior Charles de Langlade likely tread these grounds with his uncle, Nissowaquet. Both were influential in national wars and tribal affairs. (Submitted on August 16, 2020, by Cosmos Mariner of Cape Canaveral, Florida.)