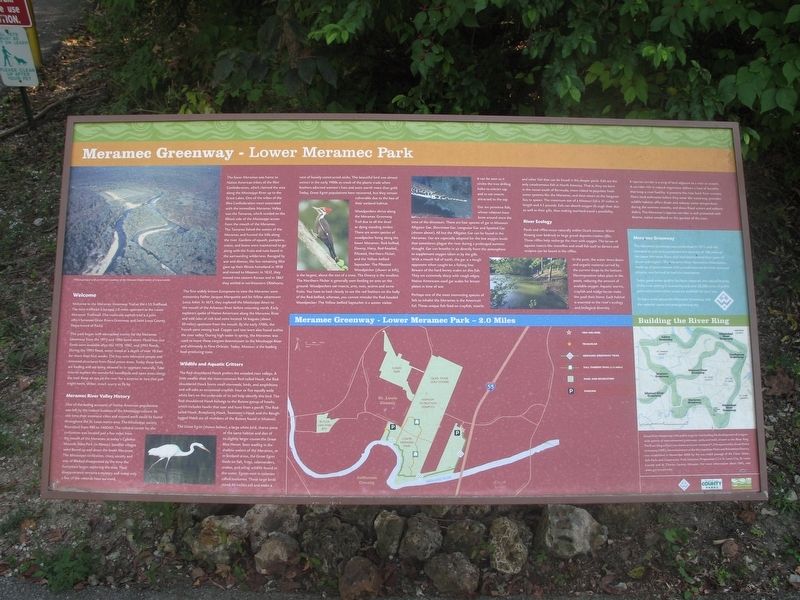 Welcome
Welcome to the Meramec Greenway Trail at the I-55 Trailhead. The next trailhead is located 2.0 miles upstream at the Lower Meramec Trailhead. This multi-use asphalt trail is a joint effort between Great Rivers Greenway and the Saint Louis County Department of Parks.

This park began with earmarked money for the Meramec Greenway from the 1977 and 1986 bond issues. Flood buy-out funds were available after the 1979, 1982, and 1993 floods. During the 1993 flood, water stood at a depth of over 10 feet for more than four weeks. The buy-outs relocated people and removed structures from flood prone areas. Today these lands are healing and are being allowed to re-vegetate naturally Take time to explore the wonderful woodlands and open areas along the trail. Keep an eye on the river for a surprise or two that just might swim, slither, crawl, scurry or fly by.

Meramec River Valley History
One of the lasting accounts of Native American populations was left by the mound builders of the Mississippi culture. At one time their extensive cities and mound work could be found throughout the St. Louis metro 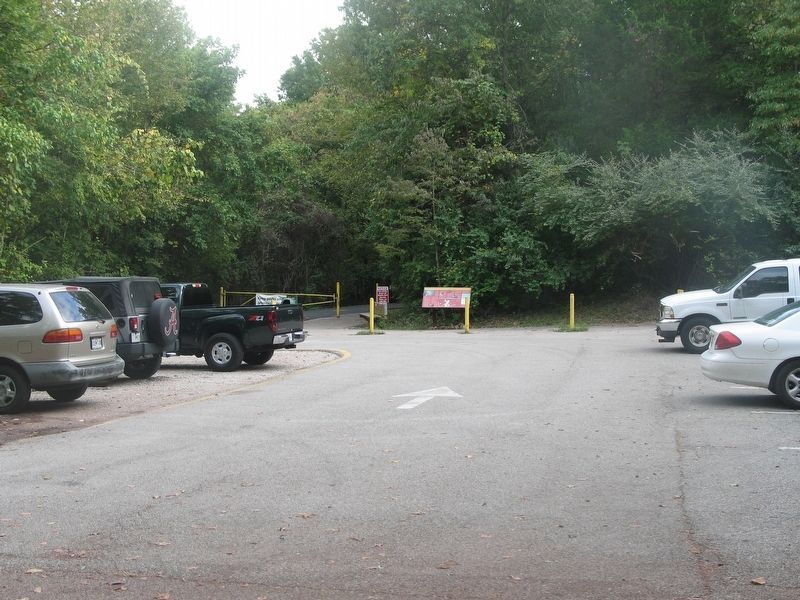 Click or scan to see
this page online
area. The Mississippi society flourished from 900 to 1400AD. The cultural center for the civilization was located just a few miles from the mouth of the Meramec at today's Cahokia Mounds State Park (in Illinois). Satellite villages were found up and down the lower Meramec. The Mississippi civilization, cities, society and way of life had disappeared by the time the Europeans began exploring the area. Their disappearance remains a mystery and today only a few of the mounds have survived.

The lower Meramec was home to Native American tribes of the Illini Confederation, which claimed the area along the Mississippi River up to the Great Lakes. One of the tribes of the Illini Confederation most associated with the immediate Meramec Valley was the Tamaroa, which resided on the Illinois side of the Mississippi across from the mouth of the Meramec. The Tamaroa fished the waters of the Meramec and hunted the hills along the river. Gardens of squash, pumpkins, maize, and beans were maintained to go along with the fruits and nuts found in the surrounding wilderness. Ravaged by war and disease, the few remaining Illini gave up their Illinois homeland in 1818 and moved to Missouri. In 1832, they moved into eastern Kansas and in 1867 they settled in northeastern Oklahoma. 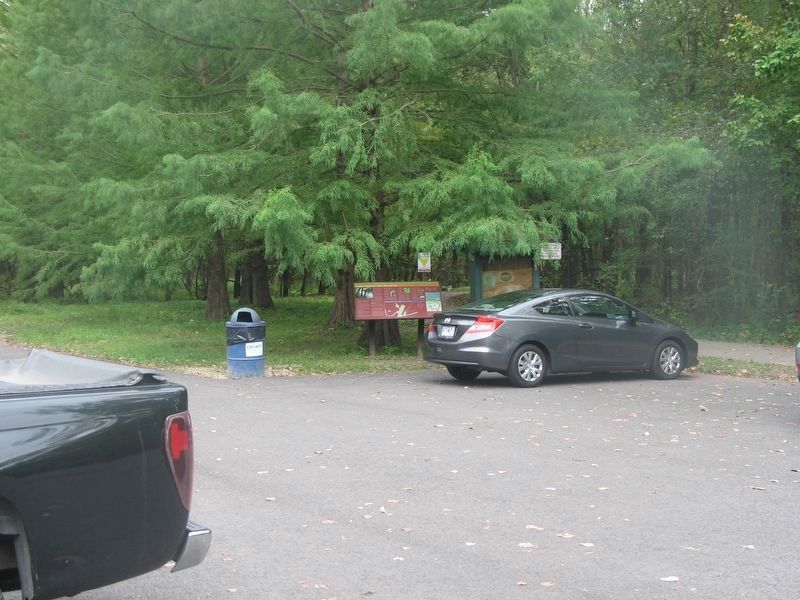 Photographed By Carl Scott Zimmerman, September 29, 2020
3. Marker at Holzer Road parking lot
Marquette and his fellow adventurer Louis Joliet. In 1673, they explored the Mississippi down to the mouth of the Arkansas River before returning north. Early explorers spoke of Native Americans along the Meramec River and told tales of rich land veins located 16 leagues (about 50 miles) upstream from the mouth. By the early 1700s, the French were mining lead. Copper and iron were also found within the river valley. During high water in spring, the Meramec was used to move these cargoes downstream to the Mississippi River and ultimately to New Orleans. Today, Missouri is the leading lead-producing state.

The Great Egret (shown below), a large white bird, shares some of the same habitat and diet of its slightly larger cousin the Great Blue Heron. Seen wading in the shallow waters of the Meramec, or in wetland areas, the Great Egret feeds on fish, frogs, salamanders, snakes, and other wildlife found in the water. Egrets nest in colonies called rookeries. These large birds stand 40-inches tall and make a nest of loosely constructed sticks. This beautiful bird was almost extinct in the early 1900s as a result of the plume trade when feathers adorned women's hats and were worth more than gold. Today, Great Egret populations have recovered, but they remain vulnerable due to the loss of their wetland habitat.

Woodpeckers thrive along the Meramec Greenway Trail due to all the dead or dying standing timber. There are seven species of woodpecker living along the lower Meramec: Red-bellied, Downy, Hairy, Red-headed, Pileated, Northern Flicker, and the Yellow-bellied Sapsucker. The Pileated Woodpecker (shown at left), is the largest about the size of a crow. The Downy is the smallest. The Northern Flicker is generally seen feeding on ants on the ground Woodpeckers eat insects, ants, nuts, acorns and some fruits. You have to look closely to see the red feathers on the belly of the Red-bellied, whereas, you cannot mistake the Red-headed Woodpecker. The Yellow-bellied Sapsucker is a winter visitor.

It can be seen as it circles the tree drilling holes to extract sap and to eat insects attracted to the sap.

Gar are primitive fish, whose relatives have been around since the time of the dinosaurs. There are four species of gar in Missouri: Alligator Gar, Shortnose Gar, Longnose Gar, and Spotted Gar (shown above). All but the Alligator Gar can be found in the Meramec. Gar are especially adapted for the low oxygen levels that sometimes plague the river during a prolonged summer drought. Gar can breathe in air directly from the atmosphere to supplement oxygen taken in by the gills. With a mouth full of teeth, the gar is a tough opponent when caught on a fishing line. Beware of the hard boney scales on this fish. They are extremely sharp with rough edges. Native Americans used gar scales for breast plates in time of war.

Perhaps one of the most interesting species of fish to inhabit the Meramec is the American Eel. These unique fish feed on crayfish, insects, and other fish that can be found in the deeper pools. Eels are the only catadromous fish in North America. That is, they are born in the ocean south of Bermuda, move inland to populate fresh water systems like the Meramec, and then return to the Sargasso Sea to spawn. The maximum size of a Missouri Eel is 37 inches in length and 4.5 pounds. Eels can absorb oxygen through their skin as well as their gills, thus making overland travel a possibility.

River Ecology
Pools and riffles occur naturally within Ozark streams. Water flowing over bedrock or large gravel deposits creates riffles. These riffles help recharge the river with oxygen. The larvae of aquatic insects like stoneflies and small fish such as darters and sculpins can be found in the riffles.

In the pools, the water slows down and organic material carried by the current drops to the bottom. Decomposition takes place in the pools, reducing the amount of available oxygen. Aquatic worms, crayfish and midge larvae make the pool their home. Each habitat is essential to the river's ecology and biological diversity.

A riparian corridor is a strip of land adjacent to a river or stream. A corridor rich in natural vegetation delivers a host of benefits that keep a river healthy; it protects the river bank from erosion; filters land sediments before they enter the waterway; provides wildlife habitat; offers shade and reduces water temperature during the summer months; and slows flood waters and collects debris. The Meramec's riparian corridor is well protected with diverse, native woodland on this portion of the river.

Meramec Greenway
The Meramec Greenway was established in 1975 with the mandate to plan and coordinate the recovery of 108 miles of the lower Meramec River that had deteriorated from years of abuse and neglect. The Meramec River Recreation Association, made up of governments with jurisdiction on the river and area citizens, was formed to lead the restoration.

Today good water quality has been restored, the natural beauty of the river setting is recovering and over 28,000 acres of public parks and conservation areas are available for your use.

To learn more about the Meramec Greenway visit the website: www.meramecgreenway.org

Building the River Ring
Great Rivers Greenway is the public organization leading the development of a region-wide system of interconnected greenways, parks and trails, known as the River Ring. The River Ring will join two states and cover an area of 1,216 square miles. Great Rivers Greenway (GRG), formerly known as the Metropolitan Parks and Recreation District, was established in November 2000 by the successful passage of the Clean Water, Safe Parks and Community Trails Initiative (Proposition C) in St. Louis City, St. Louis County and St. Charles County, Missouri. For more information about GRG, visit www.greatrivers.info.