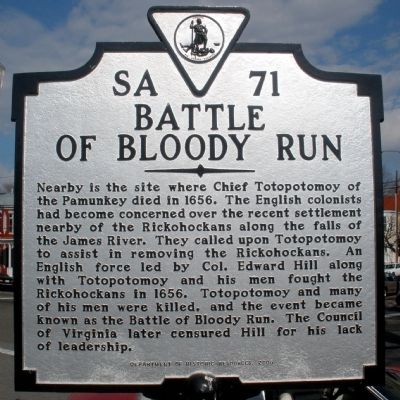 Nearby is the site where Chief Totopotomoy of the Pamunkey died in 1656. The English colonists had become concerned over the recent settlement nearby of the Rickohockans along the falls of the James River. They called upon Totopotomoy to assist in removing the Rickohockans. An English force led by Col. Edward Hill along with Totopotomoy and his men fought the Rickohockans in 1656. Totopotomoy and many of his men were killed, and the event became known as the Battle of Bloody Run. The Council of Virginia later censured Hill for his lack of leadership.

Topics and series. This historical marker is listed in these topic lists: Colonial Era • Military • Native Americans. In addition, it is included in the Virginia Department of Historic Resources series list. A significant historical year for this entry is 1656. 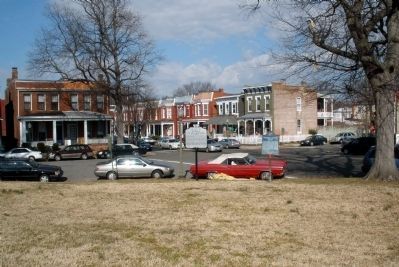 Click or scan to see
this page online
when traveling north on North 32nd Street. This marker is located in the northwest corner of Chimborazo Park. Touch for map. Marker is in this post office area: Richmond VA 23223, United States of America. Touch for directions.