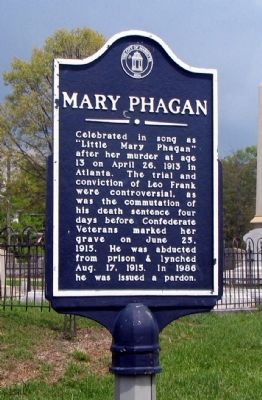 Photographed By David Seibert, April 3, 2007
1. Mary Phagan Marker
Inscription.
Mary Phagan. . Celebrated in song as "Little Mary Phagan" after her murder at age 13 on April 26, 1913 in Atlanta. The trial and conviction of Leo Frank were controversial, as was the commutation of his death sentence four days before Confederate Veterans marked her grave on June 25, 1915. He was abducted from prison and lynched Aug. 17, 1915. In 1986 he was issued a pardon. . This historical marker was erected by City of Marietta, Georgia. It is in Marietta in Cobb County Georgia

Celebrated in song as "Little Mary Phagan" after her murder at age 13 on April 26, 1913 in Atlanta. The trial and conviction of Leo Frank were controversial, as was the commutation of his death sentence four days before Confederate Veterans marked her grave on June 25, 1915. He was abducted from prison & lynched Aug. 17, 1915. In 1986 he was issued a pardon.

Erected by City of Marietta, Georgia.

Other nearby markers. At least 8 other markers are within walking distance of this marker. Lady in Black (about 400 feet away, measured in a direct line); Rev. Thomas Milton Allen (about 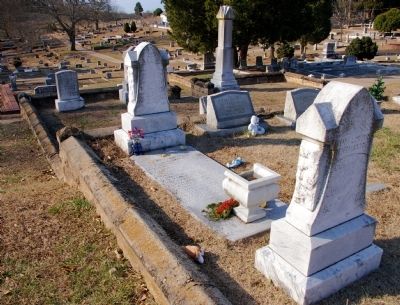 Regarding Mary Phagan. The murder of Mary Phagan, followed by the conviction and lynching of Leo Frank remains controversial even today. Frank was pardoned in 1986 due to the lynching, but most of Mary Phagan's family remains convinced of his guilt, although there is evidence that another person committed the murder.

One version of the lyrics of "Little Mary Phagan":

She left her home at eleven;
She kissed her mother goodbye;
Not once did the poor girl think
She was going off to die.

Leo Frank met her
With a brutish heart and grin;
He says to little Mary:
"You'll never see home again." 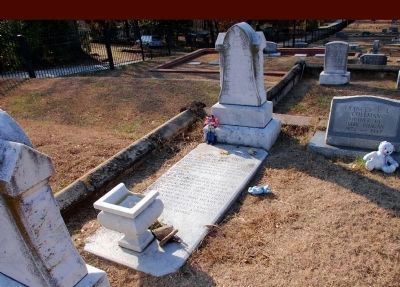 Photographed By David Seibert, December 25, 2008
3. Mary Phagan's Grave
Cemetery Street is just beyond the fence seen in the photo.
Born
June 1, 1900
Died
April 26, 1913
In this day of fading ideals and disappearing land marks, little Mary Phagan's heroism is an heirloom, than which there is nothing more precious among the old red hills of Georgia.
Sleep, little girl; sleep in your humble grave but if the angels are good to you in the realms beyond the trouble sunset and the clouded stars, they will let you know that many an aching heart in Georgia beats for you, and many a tear, from eyes unused to weep, has paid you a tribute too sacred for words.
knees fell
To Leo Frank and pled.
He picked a stick from the trash pile
And beat her o'er the head.

The tears rolled dean her cheek,
The blood rolled down her back,
For she remembered telling her mother
What time she would be back.

Nemphon was the watchman;
He went to wind his key;
Away down in the basement
Was nothing he could see.

They phoned for the officers;
Their names I do not know;
They came to the pencil factory,
Says to Nemphon, "You must go."

They took him to the jail house;
They bound him in his cell;
The poor old innocent negro
Had nothing he could tell.

Mother sits a-weeping;
She weeps and mourns all day
And hopes to meet her darling
In a better land some day.

Come, all ye good people,
Wherever you may be,
Suppose that "little Mary"
Belonged to you or me.

I have an idea in my mind
When Frankie comes to die
And stands examination
In the courthouse in the sky,

He'll be so astonished
To what the angels say
And how he killed little Mary
Upon that holiday.

Judge Roan passed a sentence;
He passed it very well;
The Christian doers of heaven
Sent Leo Frank to hell.

Related marker. Click here for another marker that is related to this marker. The HMDB entry for the Leo Frank 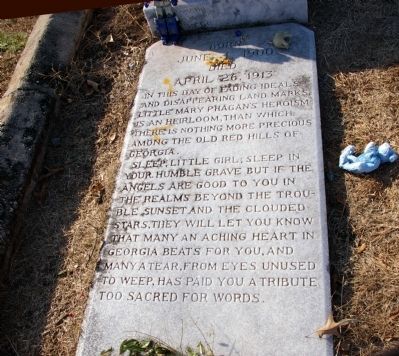