Some French and Indian War Incidents in Hampshire County 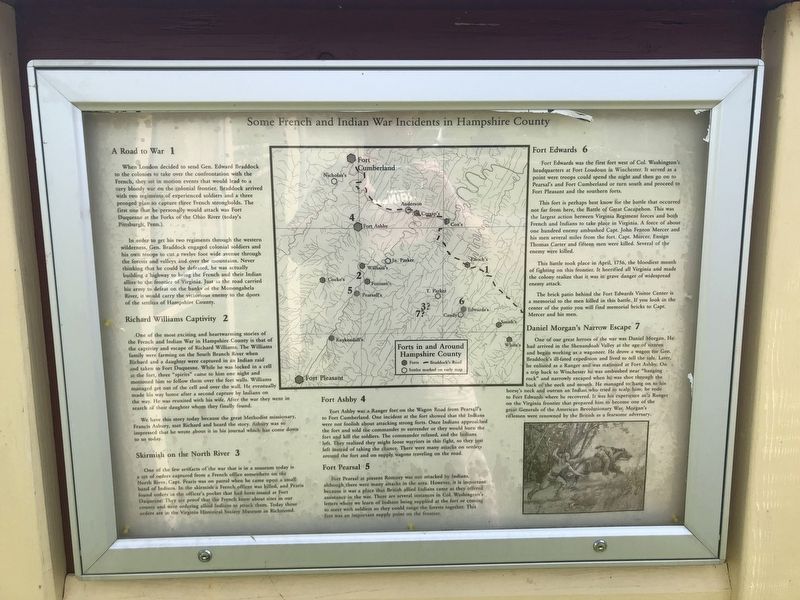 1. A Road to War
When London decided to send Gen. Edward Braddock to the colonies to take over the confrontation with the French, they set in motion events that would lead to a very bloody war on the colonial frontier. Braddock arrived with two regiments of experienced soldiers and a three pronged plan to capture three French strongholds. The first one that he personally would attack was Fort Duquesne at the Forks of the Ohio River (today's Pittsburgh, Penn.).

In order to get his two regiments through the western wilderness, Gen. Braddock engaged colonial soldiers and his own troops to cut a twelve foot wide avenue through the forests and valleys and over the mountains. Never thinking that he could be defeated, he was actually building a highway to bring the French and their Indian allies to the frontier of Virginia. Just as the road carried his army to defeat on the banks of the Monongahela River, it would carry the victorious enemy to the doors of the settlers of Hampshire County.

2. Richard Williams Captivity
One of the most exciting and heartwarming stories of the French and Indian War in 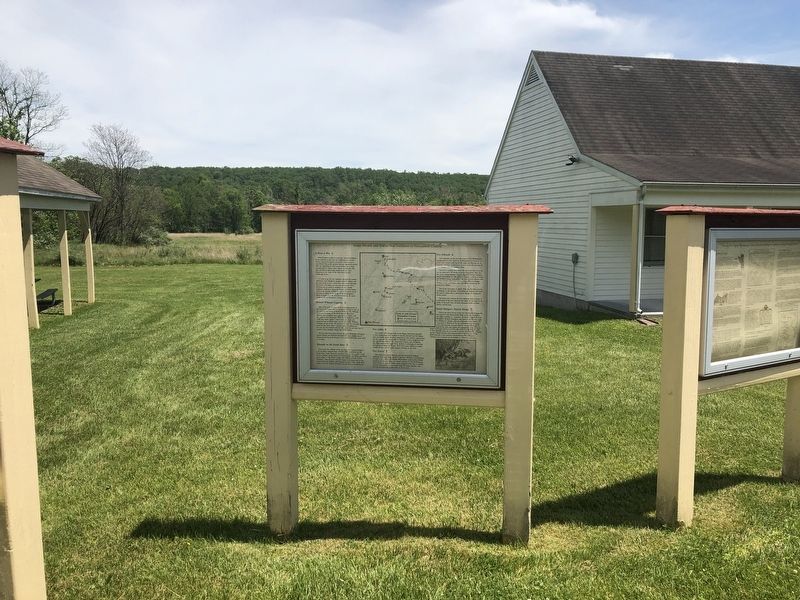 By Devry Becker Jones, May 28, 2020
2. Some French and Indian War Incidents in Hampshire County Marker
Hampshire County is that of the captivity and escape of Richard Williams. The Williams family were farming on the South Branch River when Richard and a daughter were captured in an Indian raid and taken to Fort Duquesne. While he was locked in a cell at the fort, three "spirits" came to him one night and motioned him to follow them over the fort walls. Williams managed get out of the cell and over the wall. He eventually made his way home after a second capture by Indians on the way. He was reunited with his wife. After the way they went in search of their daughter whom they finally found.

We have this story today because the great Methodist missionary, Francis Asbury, met Richard and heard the story. Asbury was so impressed that he wrote about it in his journal which has come down to us today.

3. Skirmish on the North River
One of the few artifacts of the war that is in a museum today is a set of orders captured from a French office somewhere on the North River. Capt. Pearis was on patrol when he came upon a small band of Indians. In the skirmish a French officer was killed, and Pearis found orders in the officer's pocket that had been issued at Fort Duquesne. They are proof that the French knew about sites in our county and were ordering allied Indians to attack them. Today those orders are in the Virginia Historical Society Museum in Richmond.

4. Fort Ashby
Fort Ashby was a Ranger fort on the Wagon Road from Pearsall's to Fort Cumberland. One incident at the fort showed that the Indians were not foolish about attacking strong forts. Once Indians approached the fort and told the commander to surrender of they would burn the fort and kill the soldiers. The commander refused, and the Indians left. They realized they might loose warriors in this fight, so they just left instead of taking the chance. There were many attacks on settlers around the fort and on supply wagons traveling on the road.

5. Fort Pearsal
Fort Pearsal at present Romney was not attacked by Indians although there were many attacks in the area. However, it is important because it was a place that British allied Indians came as they offered assistance in the war. There are several instances in Col. Washington's letters where we learn of Indians being supplied at the fort or coming to meet with soldiers so they could range the forests together. This fort was an important supply point on the frontier.

6. Fort Edwards
Fort Edwards was the first fort west of Col. Washington's headquarters at Fort Loudoun in Winchester. It served as a point were troops could spend the night and then go on to Pearsal's and Fort Cumberland or turn south and proceed to Fort Pleasant and the southern forts.

This fort is perhaps best know for the battle that occurred not far from here, the Battle of Great Cacapehon. This was the largest action between Virginia Regiment forces and both French and Indians to take place in Virginia. A force of about one hundred enemy ambushed Capt. John Fenton Mercer and his men several miles from the fort. Capt. Mercer, Ensign Thomas Carter and fifteen men were killed. Several of the enemy were killed.

This battle took place in April, 1756, the bloodiest month of fighting on this frontier. It horrified all Virginia and made the colony realize that it was in grave danger of widespread enemy attack.

The brick patio behind the Fort Edwards Visitor Center is a memorial to the men killed in this battle. If you look in the center of the patio you will find memorial bricks to Capt. Mercer and his men.

7. Daniel Morgan's Narrow Escape
One of our great heroes of the war was Daniel Morgan. He had arrived in the Shenandoah Valley at the age of sixteen and began working as a wagoneer. He drove a wagon for Gen. Braddock's ill-fated expedition and lived to tell the tale. Later, he enlisted as a Ranger and was stationed at Fort Ashby. One a trip back to Winchester he was ambushed near "hanging rock" and narrowly excaped when he was shot through the back of the neck and mouth. He managed to hang on to his horse's neck and outrun an Indian who tried to scalp him; he rode to Fort Edwards here he recovered. It was his experience as a Ranger on the Virginia frontier that prepared him to become one of the great Generals of the American Revolutionary War. Morgan's riflemen were renowned by the British as a fearsome adversary.

Erected by The Fort Edwards Foundation.

Topics and series. This historical marker is listed in these topic lists: Colonial Era • Forts and Castles • Native Americans • War, French and Indian. In addition, it is included in the Francis Asbury, Traveling Methodist Preacher ⛪ series list.