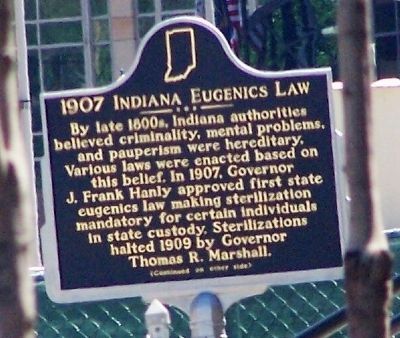 Topics and series. This historical marker is listed in these topic lists: Civil Rights • Science & Medicine. In addition, it is included in the Indiana Historical Bureau Markers series list. A significant historical year for this entry is 1907. 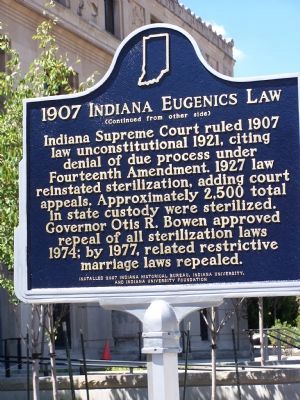 Click or scan to see
this page online
39° 46.185′ N, 86° 9.812′ W. Marker is in Indianapolis, Indiana, in Marion County. Marker is on North Senate Avenue. Located on the East lawn of the Indiana State Library. Touch for map. Marker is at or near this postal address: 140 N Senate Ave, Indianapolis IN 46204, United States of America. Touch for directions.

Side 2
Indiana Supreme Court ruled 1907 law unconstitutional 1921, citing denial of due process under Fourteenth Amendment. (5) A 1927 law provided for 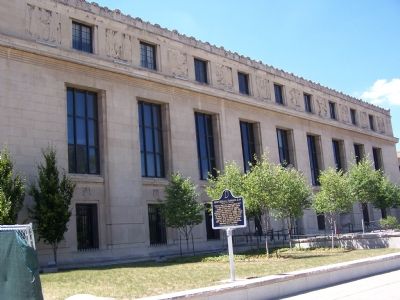 (1) In a paper presented in 1879 to the Social Science Association of Indiana, Harriet Foster claimed that imbeciles and the feeble-minded often inherit their conditions. Foster stated that “intermarriage of consanguineous persons, and intemperance of one or both parents,” are the most frequent reasons certain people have mental problems. Harriet M. Foster, The Education of Idiots and Imbeciles (Indianapolis, 1979), 6 (B050907).

A preacher, Oscar C. McCulloch, studied a group of families around Indianapolis he called the Tribe of Ishmael, using records dating back to 1840. McCulloch claimed his study proved human degradation through heredity. McCulloch concluded mental weakness, pauperism, licentiousness, and poor morals stemmed from genetics. McCulloch stated, “Note the force of heredity. Each child tends to the same life, reverts when taken out.” Oscar C. McCulloch, Tribe of Ishmael: A Study in Social Degradation (Indianapolis, 1881), 7 (B050968).

The findings of Tribe of Ishmael were contested in an article in the Encyclopedia of Indianapolis. The author of the article, Robert Horton, then at the Indiana 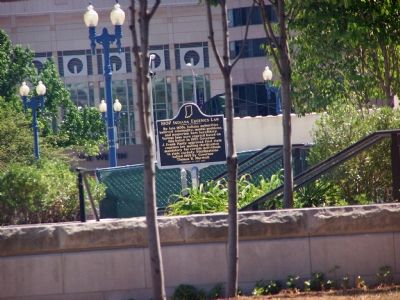 Photographed By M. Bowyer, July 22, 2007
4. 1907 Indiana Eugenics Law Marker
State Archives, claimed, “the rhetoric of McCulloch’s work is enough to raise suspicions about the quality of his research.” A record on Robert Ross in McCulloch’s book calls Ross a man of low cunning and noted that he “seduced all his daughters and made them his mistresses.” A case history of the same man in the Family Service Association of Indianapolis described Ross as a “very industrious sober man,” an assessment that his employer and minister confirmed. Horton states McCulloch saw what he wanted to see. Encyclopedia of Indianapolis, David J. Bodenhamer and Robert G. Barrows, eds. (Bloomington & Indianapolis, 1994), 1341-1342 (B050857).

Alexander Johnson, named the first secretary of the Board of State Charities in 1889, was influenced by McCulloch’s work. McCulloch even assisted in naming Johnson as secretary. Johnson noted in his memoirs, “Generation after generation many of the families to which these defective people belonged had been paupers, in or out of the asylum; their 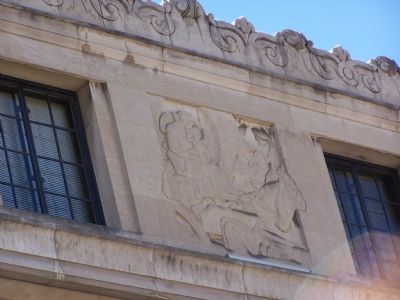 Photographed By M. Bowyer, July 22, 2007
5. The Indiana State Library
total number and the proportion of feeble minded among them steadily increasing as time went on.” Alexander Johnson, Adventures in Social Welfare: Being Reminiscences of Things, Thoughts and Folks During Forty Years of Social Work (Fort Wayne, 1923), 144-45 (B050908).

Ernest Bicknell, Johnson’s successor, released an official report in 1896 that lamented the hereditary condition of pauperism. Board of State Charities, The Indiana Bulletin (March, 1896), 7-8 (B050916).

Amos Butler replaced Bicknell on January 1, 1898. Under Butler, the first reference to sterilization as a way to prevent insanity and “defectives” has been located in an official state document. Board of State Charities, The Indiana Bulletin (June, 1900), 90 (B050919).

(2) May 8, 1901, Governor Winfield Taylor Durbin approved a law supported by the Board of Charities that made unsupervised, feeble-minded women from 16-45 wards of the state to prevent them from producing future generations of feeble-minded persons. Laws of Indiana, 1901, pp. 156-59 (B050940).

In an effort to reduce reproduction by the feeble-minded, Governor J. Frank Hanly approved a marriage law on March 9, 1905 that prohibited marriage licenses for imbeciles, epileptics, and those of unsound minds. Laws of Indiana, 1905, pp. 215-16 (B050824). 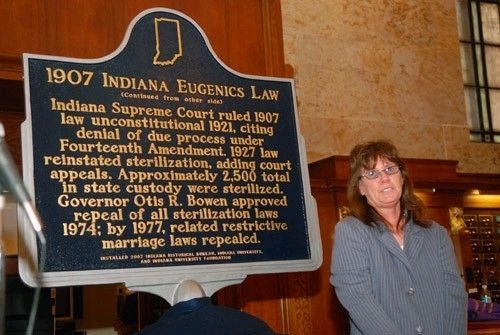 Governor James P. Goodrich spoke about Marshall’s failure to enforce the law in a speech to the Indiana General Assembly. Goodrich said, “Ever since Governor Marshall raised the question as to the constitutionality of the present law authorizing the desexualization of inmates of certain institutions, it has been a dead letter and no serious attempt has been made to enforce it.” Indiana Senate Journal, 1921, p. 23 (B050855).

(6) Governor Edward Jackson approved the 1927 law, which granted the due process of law required by the Fourteenth Amendment, naming the courts as venues for appeal regarding sterilization decisions by the governing board of an institution. Laws of Indiana, 1927, pp. 713-17 (B050830).

Professor Alexandra Minna Stern of the University of Michigan estimated around 2,000 people were sterilized under Indiana law. Professor Stern’s figures are in a footnote in the forthcoming article, “We Cannot Make a Silk Purse out of a Sow’s Ear: Eugenics in the Hoosier Heartland, 1900-1960” Indiana Magazine of History, 103 (March, 2007) (B051015). “I derived the figure of 2,000 by adding up the 1,576 sterilizations reported by the Indiana Department of Mental Health for the period 1936 to 1962, the 308 operations listed in the Fort Wayne annual reports for the fiscal years 1927-1928 to 1935-1936 (as complied by ISA archivist Vicki Casteel), the 144 sterilization orders approved by the Muscatatuck Board of Trustees from 1937 to 1953, the 35 sterilizations listed in the Logansport annual reports from 1931 to 1943 (when they appear to end), the 7 salpingectomies listed in the Indiana Girls’ School annual reports from 1927 to 1933, and several redacted Fort  Wayne patient records listing sterilizations dated 1933 to 1975. Although the total comes to 2,072, I use the more conservative estimate of 2,000 because some of the Muscatatuck inmates were transferred to Fort Wayne for sterilization and it is unclear how these operations were counted. During the same period, sterilizations were not reported  in the annual reports of Indiana’s other insane hospitals or the Village for Epileptics, and further research is needed to determine if unreported sterilizations occurred in those facilities. See “Eugenic Sterilization in Indiana”; Fort Wayne State School Annual Reports (Indianapolis: Wm. Buford) 1927-1952; Logansport State Hospital Annual Reports (Fort Wayne: Fort Wayne Printing Co.) 1931-1943; Indiana Girls’ School Annual Reports (Indianapolis: Wm. Buford), 1927-1933; Muscatatuck Colony for the Feebleminded, Board of Trustees, Minutes, 1937-1953 and assorted redacted Fort Wayne State Hospital and Training Center Face Sheets, ISA.” Stern’s numbers do not include the 500 sterilizations from 1899-1910 claimed by Doctor Harry C. Sharp, bringing Indiana’s total of official and unofficial sterilizations to approximately 2,500.

There are several other sources that record the number sterilizations that occurred over a short period of time as well. Doctor Harry C. Sharp of the Indiana State Reformatory claimed in a 1909 pamphlet to have sterilized around 500 inmates from 1899 to 1909. These operations took place before and after the 1907 law that legalized the procedure. Sharp, H.C., Vasectomy: A Means of Preventing Defective Procreation (Indianapolis, 1909) (050961).

According to Robert L. Osgood, from 1907-1909, 120 state-funded sterilizations took place at the State Reformatory. Osgood, “The Menace of the Feebleminded,” Indiana Magazine of History, 97 (December, 2001), 257 (B050853). Official numbers from this time period are difficult to find, and Osgood’s tally has not been verified.

2. Reflections on 100 Years of Eugenics in Indiana. The Indiana Supreme Court held an event regarding "Eugenics in Indiana" on Wednesday, April 11, 2007. This event focused on issues relating to the history of eugenics laws in Indiana. A three-member panel was present to discuss issues regarding Eugenics which included: Paul Lombardo, Ph.D, J.D., Professor of Law, Georgia State University; Eric M. Meslin, Ph.D, Center for Bioethics, Indiana University School of Medicine and Peter Marcus, M.D., M.A., Indiana University School of Medicine, Department of Obstetrics & Gynecology. (Submitted on August 13, 2008.)
Credits. This page was last revised on June 16, 2016. It was originally submitted on July 22, 2007, by M. Bowyer of Indianapolis, Indiana. This page has been viewed 18,629 times since then and 4 times this year. Photos:   1, 2, 3, 4, 5. submitted on July 22, 2007, by M. Bowyer of Indianapolis, Indiana.   6. submitted on August 13, 2008, by Paul A. Lombardo of Decatur, Georgia. • J. J. Prats was the editor who published this page.
Share this page.