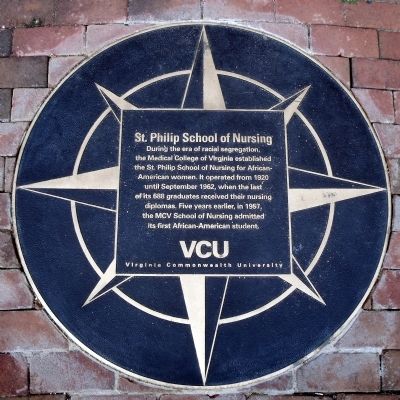 Topics. This historical marker is listed in these topic lists: African Americans • Civil Rights • Education • Science & Medicine. A significant historical year for this entry is 1920.

Location. 37° 32.361′ N, 77° 25.785′ W. Marker is in Richmond, Virginia. Marker can be reached from the intersection of East Marshall Street and North 13th Street, on the right when traveling east. Touch for map. Marker is in this post office area: Richmond VA 23298, United States of America. Touch for directions. 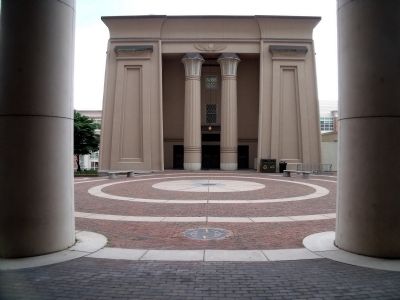 Additional commentary.
1. camaraderie of Graduates
My mother, Marian Jeffries Waples, known while she was there as Marian Jeffries, graduated from the St. Philip School of nursing and taught me to appreciate the historical context of language. As a Negro nurse, she was addressed as Nurse whereas the White Nurses to be were addressed as Miss. To me, Nurse sounded more professional but not to my mother, who'd lived through the slights of segregation. They had the same teachers and same facilities as the white nurses but intrinsically knew the differences of the culture of the day. It was a valuable lesson that helped shape me and how I still view history - always with an appreciation for what I don't know about 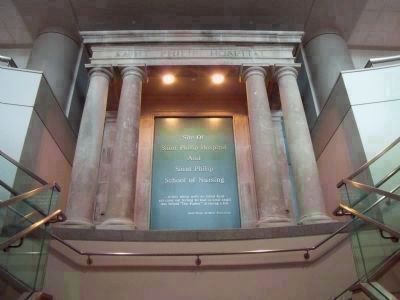 Photographed By Bernard Fisher, July 10, 2009
3. St. Philip Hospital facade.
Site of
St. Philip Hospital
and
St. Philip
School of Nursing
...within whose walls we toiled hard yet came out feeling we had in some small way helped "Our Father" in saving a life.

Saint Philip Alumnae Association
the cultural context of the language of the day. Thank you for the tribute to all these wonderful nurses, many of whom, like my mother, passed on. Mom died last November at the age of 91. She and my Dad always inspired each of us. 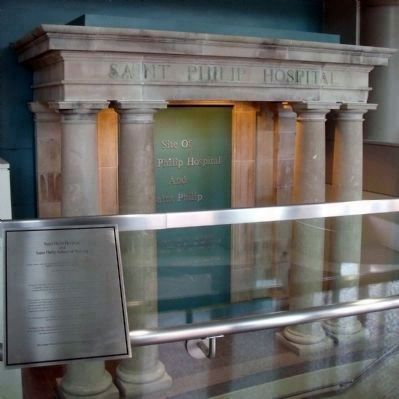 Photographed By Bernard Fisher, July 10, 2009
4. St. Philip Hospital and St. Philip School of Nursing plaque
...within whose walls we toiled hard yet came out feeling we had in some small way helped "Our Father" in saving a life. Saint Philip Alumnae Association

On this site in November 1920 Saint Philip Hospital, then the only general hospital for Negroes in the United States, opened its doors to serve the Negro community. The Richmond community contributed $250,000 to make possible the construction of the hospital, which was, at the time, “the most modern type of hospital in Virginia.”

The Saint Philip Hospital closed its doors as a hospital for Negroes in 1965. The building was incorporated into the MCV Hospitals complex and renamed East Hospital.

The Medical College of Virginia Commonwealth University is proud to honor the spirit of the Saint Philip School of Nursing and the many accomplishments of its graduates. The portion in front of where you now stand is the original architecture which graced the entrance to the Saint Philip Hospital.

This plaque dedicated by the saint Philip Alumnae Association. 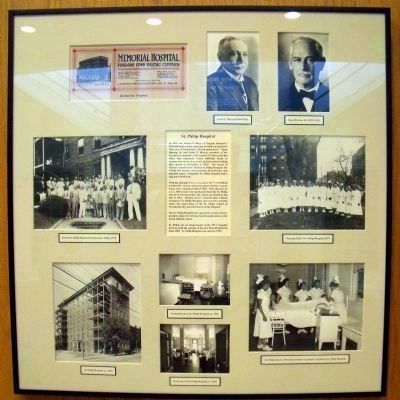 Photographed By Bernard Fisher, July 10, 2009
5. St. Philip Hospital Display
In 1916, the Medical College of Virginia initiated a $250,000 fund raising campaign to build a hospital for “the care of Richmond’s colored population.” Eppa Hunton, Jr. and Lewis Z. Morris, members of the Executive Committee of the Board of Visitors, led that effort that ultimately raised sufficient funds to construct the seven story, brick and limestone building that opened on November 1, 1920. The Board of Visitors named it new facility St. Philip Hospital for “Philip the deacon, who preached, did miracles, and baptized many.” Originally St. Philip Hospital had a capacity of 146 beds.

With the opening of the new hospital, MCV established a school for African-American nurses and five women began their training in fall of 1920. Over the next 42 years, 688 women were graduated from the St. Philip School of Nursing before the school was closed in the fall of 1962. Student nurses received their clinical training in St. Philip Hospital and cared for patients under the supervision of the St. Philip School of Nursing faculty and staff nurses of the hospital.

The St. Philip Hospital also sponsored a series of post-graduate clinics for African-American physicians in the South Atlantic region.

St. Philip was an integral part of the MCV hospital division until the opening of the new Main Hospital in June 1982. St. Philip Hospital was razed in 1993. 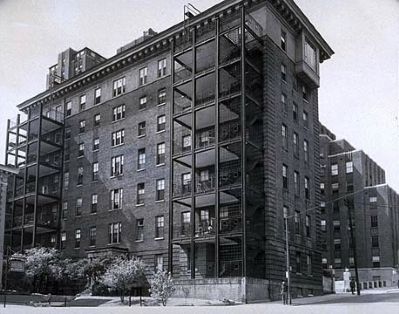 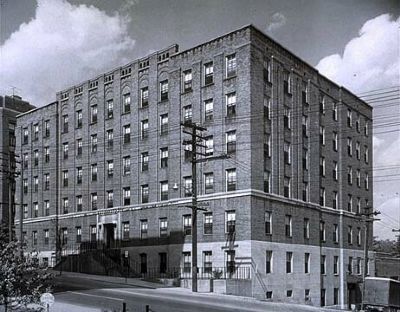