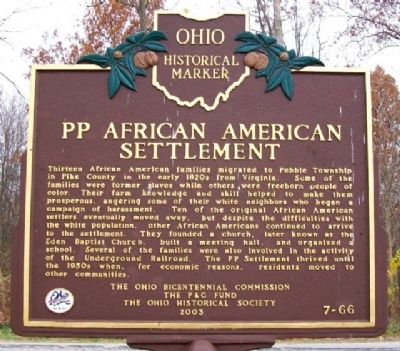 Side A: PP African American Settlement
Thirteen African American families migrated to Pebble Township in Pike County in the early 1820s from Virginia. Some of the families were former slaves while others were freeborn people of color. Their farm knowledge and skill helped to make them prosperous, angering some of their white neighbors who began a campaign of harassment. Ten of the original African American settlers eventually moved away, but despite the difficulties with the white population, other African Americans continued to arrive to the settlement. They founded a church, later known as the Eden Baptist Church, built a meeting hall, and organized a school. Several of the families were also involved in the activity of the Underground Railroad. The PP Settlement thrived until the 1950s when, for economic reasons, residents moved to other communities. 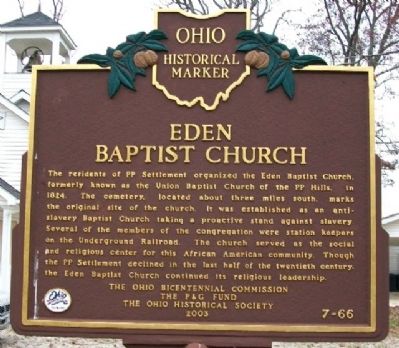 Click or scan to see
this page online
as an anti-slavery Baptist Church taking a proactive stand against slavery. Several of the members of the congregation were station keepers on the Underground Railroad. The church served as the social and religious center for this African American community. Though the PP Settlement declined in the last half of the twentieth century, the Eden Baptist Church continued its religious leadership.

Location. 39° 10.752′ N, 83° 7.26′ W. Marker is near Waverly, Ohio, in Pike County. Marker is on Nipgen Road (County Route 34) one mile west of Turkey Run Road, on the right when traveling west. Church and marker are about 8 miles WNW of Waverly. Touch for map. Marker is in this post office area: Waverly OH 45690, United States of America. Touch for directions.

Other nearby markers. At least 8 other markers are within 8 miles of this marker, measured 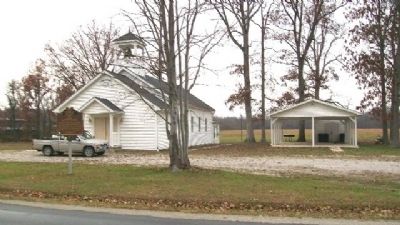 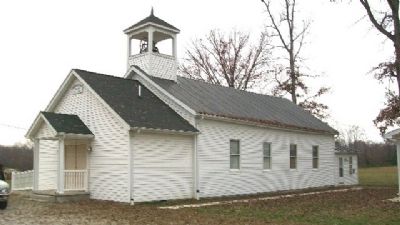