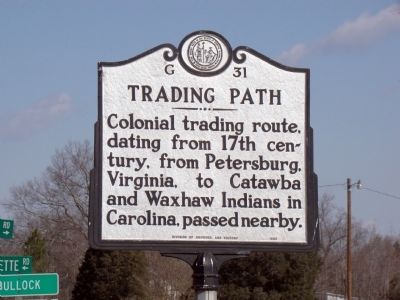 By J. J. Prats, February 10, 2010
1. Trading Path Marker
Inscription.
Trading Path. . Colonial trading route, dating from 17th century, from Petersburg, Virginia, to Catawba and Waxhaw Indians in Carolina, passed nearby. . This historical marker was erected in 1985 by Division of Archives and History. It is in Bullock in Granville County North Carolina

Colonial trading route, dating from 17th century, from Petersburg, Virginia, to Catawba and Waxhaw Indians in Carolina, passed nearby.

Erected 1985 by Division of Archives and History. (Marker Number G-31.) 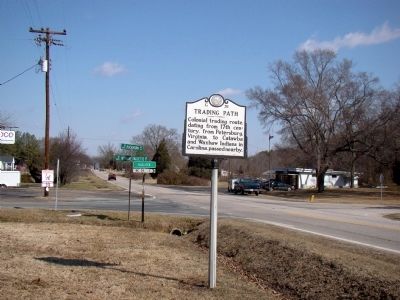 Also see . . .  Retracing the Great Indian Trading Path: Occaneechi Town to the Trading Ford. Article by Tom Fowler on the Trading Path Association website. “The Great Indian Trading Path was actually a series of paths connecting the area of Virginia in the vicinity of present-day Petersburg with the Catawba Indian lands near present-day Charlotte. The Path was in use by the native population of traders and travellors long before the appearance of European explorers and traders. Early maps of this area show the Path crossing the Yadkin and then cutting across present day Davidson, Randolph, Guilford, Alamance and Orange Counties. Early European explorers such as John Lederer in 1670, Lawson in 1701, William Byrd in 1728, and Bishop Spangenburg in 1752, wrote at some length about the Trading Path. Bishop Spangenburg contrasted traveling on the Path to traveling over the land beyond the Path: ‘On the Trading Path ... we could find at least one house a day where food could be bought; but from here we were to turn into the pathless forest.’ A teen-aged Daniel Boone probably walked the Path with his parents in 1750 when the Boone family moved down from Pennsylvania to make a new home in the Forks of the Yadkin. George Washington traveled on a part of the Path during his southern tour in 1791. The Path continued to be heavily used on into the 19th century, as horses, and later wagons, replaced foot travel as the common means of transportation. Some have claimed that the route of Interstate 85 from Petersburg to Charlotte, and in particular the crescent connecting the cities of Durham, Hillsborough, Greensboro, Winston-Salem, Salisbury and Charlotte, was dictated by the location of these population centers which grew up where they did because of the proximity of the Trading Path.” (Submitted on February 12, 2010.)