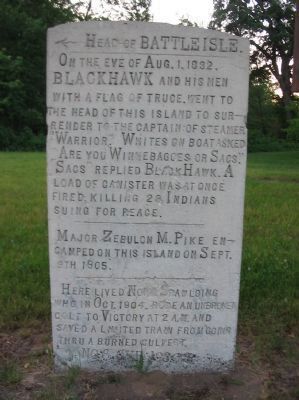 Here lived Norm Spaulding
who in Oct. 1904, rode an unbroken
colt to Victory at 2 a.m. and
saved a limited train from going
thru a burned culvert.

Topics and series. This historical marker is listed in these topic lists: Animals • Native Americans • Wars, US Indian. In addition, it is included in the Black Hawk War series list. A significant historical month for this entry is August 1825. 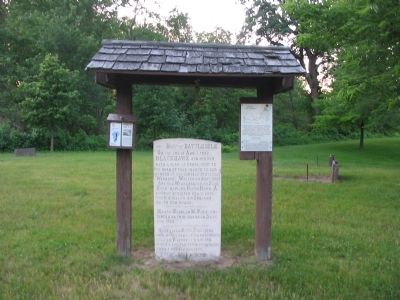 Click or scan to see
this page online
43° 27.31′ N, 91° 13.59′ W. Marker is near De Soto, Wisconsin, in Vernon County. Marker can be reached from County Road BI, 1.9 miles west of Great River Road (State Highway 35). Marker is on a Mississippi River island south of the West Loop Camp Area in Blackhawk Park. Touch for map. Marker is at or near this postal address: E590 County Highway BI, De Soto WI 54624, United States of America. Touch for directions.

Also see . . .  Zebulon Pike. Wikipedia entry. "Pike's account of his southwest expedition was published in 1810 as The expeditions of Zebulon Montgomery Pike to headwaters of the Mississippi River, through Louisiana Territory, and in New Spain, during the years 1805-6-7..." (Submitted on June 27, 2010.) 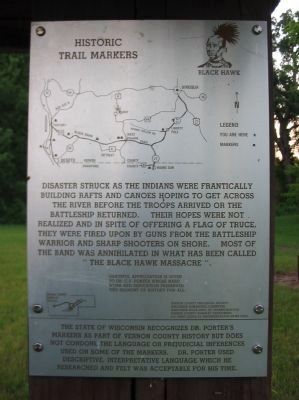 Disaster struck as the Indians were frantically building rafts and canoes hoping to get across the river before the troops arrived or the battleship returned. Their hopes were not realized and in spite of offering a flag of truce, they were fired upon by guns from the battleship Warrior and sharp shooters on shore. Most of the band was annihilated in what has been called "The Black Hawk Massacre".