The History of Columbus, Kentucky 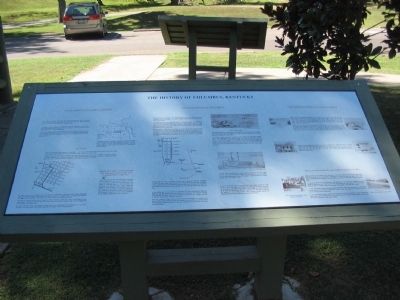 Settlement and Early Growth
The French explorers Marquette and Joliet first explored the area around Columbus in 1673. The French gave Columbus the name "Iron Banks," believing the color of the banks indicated the presence of iron.

In 1783, the Virginia legislature authorized a town to be laid out on Iron Banks. This eventually became Columbus. The survey began in 1784, but only the corners were set because of Chickasaw attacks.

Thirty years passed before another effort was made to settle the Columbus area. In 1818, Andrew Jackson bought all the lands in Kentucky and Tennessee between the Tennessee, Ohio and Mississippi rivers from the Chickasaw Indians for the federal government.

This area in Kentucky became known as the Jackson Purchase. It now includes the counties of Ballard, Calloway, Carlisle, Fulton, Graves, Hickman, Marshall, and McCracken. The area became open for white settlement without any interference from the Indians.

Slavery
When the Purchase area opened for settlement in 1821, there was little question that slavery would be a part of the culture. Early settlers came from Tennessee, 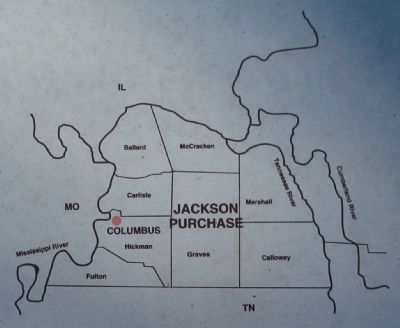 Photographed By Craig Swain, September 4, 2010
2. Map of the Jackson Purchase

Click or scan to see
this page online
eastern Kentucky, and Virginia.

Between 1822 and 1840, slavery increased 28 percent as tobacco and cotton farms increased in Hickman County. By 1861, the Jackson Purchase area produced 13 percent of the tobacco in Kentucky. The value of slaves, averaging $2.00 more than in eastern Kentucky, reflects the importance of slavery in the area.

Was Columbus Considered as the Location for the National Capital?
Local tradition holds that Columbus was considered as the location for the national capital. However, when controversy arose about the placement of the capital in 1789 and again in 1812, Columbus did not exist as a town. Congress again raised the subject in 1846 and 1869, but Congressional records do not mention Columbus. Owing to the significant size of the Columbia plot, someone had ambition for Columbus. Whether or not it was considered as the national capital may never be known.

In 1820, the town of Columbus was surveyed and organized on the flood plain of the Mississippi River. The town occupied 4,000 acres and contained space for a public square, a college and cemetery, and other public buildings. Columbus is the oldest town in the Jackson Purchase.

The sale of lots by public auction began in 1822. Families moved into town and formed a local government. Columbus became the first county seat of Hickman County, which then included the entire 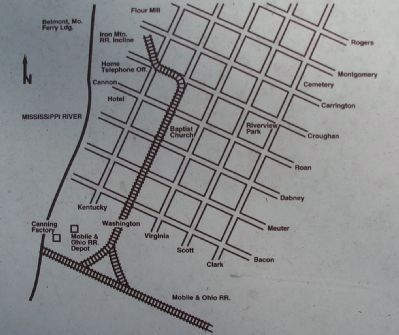 By 1845, Columbus was a prominent trading post on the Mississippi River between St. Louis and Memphis. The town sold all the needed supplies for people in the Purchase District.

The Railroads of Columbus
Steamboat travel increased on the Mississippi from 1811 to the 1860s. Columbus prospered with the increase in river traffic. Settlers arrived weekly and Columbus grew in importance.

The railroads soon took over as the leader in commerce traffic and Columbus was again part of that growth. Columbus became the northern terminus for the Mobile and Ohio Railroad in the early 1850s. The owners of the railroad wanted the terminus close to the mouth of the Ohio River to tap northern trade. Columbus occupied the best possible site.

As was typical of the time, the Mobile and Ohio would run its rail line into Columbus if the county purchased $5,000 worth of stock. A campaign began to convince the county of the railroad's importance to the economy. A tax would be passed to raise money to purchase stock. The county approved the plan, and Columbus became a stockholder and the northern terminal of the Mobile and Ohio.

The Mobile and Ohio completed its line from Columbus to Mobile, Alabama in 1861, and river trade was diverted to the deep south and the port of Mobile. Unfortunately, the rail line opened only months before the 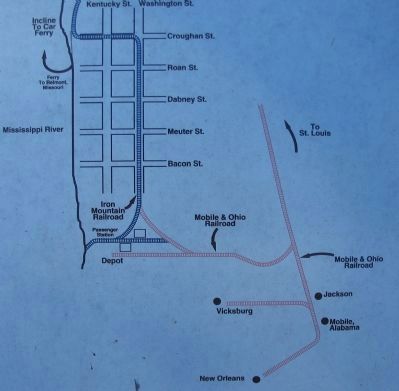 Photographed By Craig Swain, September 4, 2010
4. Map Showing Railroad Lines in Columbus
Civil War. Any economic advantage Columbus would have gained from the railroad waited until after the war.

Rail cars, instead of cargo, were ferried across the Mississippi on transfer ferry boats. These boats carried the train cars across the river, without unloading cargo or passengers. Approximately 100 cars were transferred at Columbus every day by transfer boats.

Columbus grew and prospered after the Civil War. In 1870 Columbus's population was 1,574 and by 1873, it was well over 2,000. The town's growth was primarily due to the railroads and river traffic.

From 1854 to 1881, Columbus became the major freight and passenger transfer point on the Mississippi River. Since bridges did not span the river in the late 1800s, train lines ran only to the river's edge. All freight coming into Columbus by rail or boat was unloaded at the Columbus dock. North bound freight was transferred from rail cars to wharf boats that carried the merchandise to Cairo. South bound freight was transferred from wharf boats to rail cars of the Mobile and Ohio. 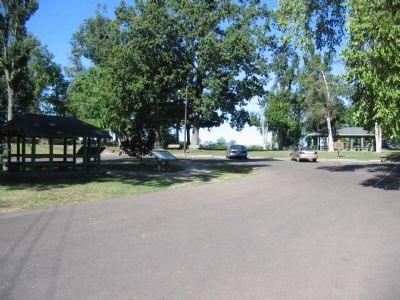 Photographed By Craig Swain, September 4, 2010
5. Markers in the Parking Area
moved rail cars across the river from 1883 to 1911. The boat contained a single track and carried only four freight cars or three passenger cars at a time. Later, double-tracked ferry boats carried twice the number of cars.

In 1874, the Illinois Central Railroad built a rail bridge across the Ohio River at Cairo. The need for freight and passenger exchange declined as railroads extended their lines to Cairo. By the 1880s, Columbus declined as an important rail center. The St. Louis and Iron Mountain ended its rail service in 1912. At that time, many bridges existed across the Mississippi River and transfer service was not profitable.

The Destruction of Old Columbus
Many floods have damaged Columbus over the years, but the flood of 1927 destroyed the town. The first waters broke the city's levy in April. Water stayed in the town for about three weeks, and in June, another flood covered Columbus. With the levy gone, the river current swept against the town's embankments. The banks eroded 350 feet in just a few weeks. Columbus's entire business district sank into the river, and only 13 out of 150 houses were unaffected by the flood.

The Red Cross established relief quarters for the flood-stricken victims. Marion Rust, in charge of the Red Cross operations, decided the damage to the town was too severe to rebuild. The Red Cross bought 80 acres for the 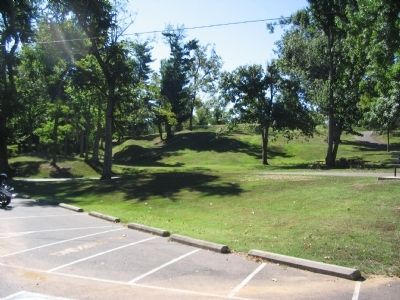 Photographed By Craig Swain, September 4, 2010
6. Earthworks and Picnic Tables in the Park Today
new site of Columbus, 140 feet above and one-half mile from the river. They also donated money to move the town to the bluff site. The new town contained a large business district and house lots averaging 100 by 200 feet.

Houses and buildings were moved to the new city beginning in September 1927. If a home owner could not afford the cost, the Red Cross paid for moving the old house or for a new house. The Red Cross paid $87,710 for the entire project. This was the first time in history an entire town was moved to a new site. By April 1928, 600 people occupied the new town of Columbus.

Development of the Columbus-Belmont Park
While examining the bluffs for the new site of Columbus, Marion Rust became fascinated with the remains of the Confederate fortifications. Though the forts were gone, Rust could see the large earthworks scattered over the bluffs and decided the area would make a beautiful park.

In 1934, the federal government appropriated $50,000 for the Park's development. This federal money allowed the Civilian Conservation Corps, under the supervision of Marion Rust, to restore the Columbus fortifications.

In July 1934, 220 Civilian Conservation Corps men arrived at Columbus. They restored the earthworks, trenches, Redoubt No. 1, and the Civil War hospital. Picnic tables and pavilions were built and miles of trails were cleared.

Location. 36° 45.941′ N, 89° 6.636′ W. Marker is in Columbus, Kentucky, in Hickman County. Located in the parking lot for Columbus-Belmont State Park. Touch for map. Marker is in this post office area: Columbus KY 42032, United States of America. Touch for directions.