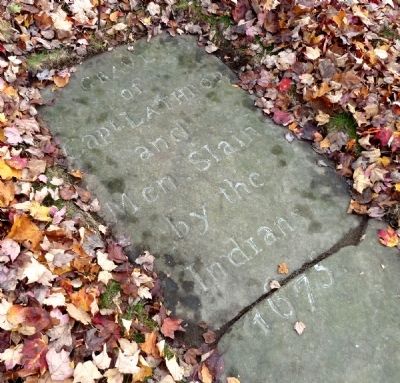 Grave
of
Capt. Lathrop
and
Men Slain
by the
Indians
1675 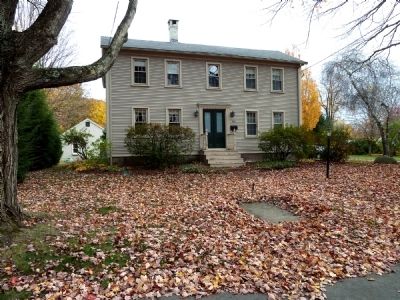 By Roger W. Sinnott, October 30, 2010
2. View of Marker from the Road
The slab sits in the front yard of the house at 100 North Main Street, just over 100 yards south of the Bloody Brook Monument.
This horizontal slab is “perhaps the oldest surviving monument to veterans in America,” write Eric B. Schultz and Michael J. Tougias in their 1999 book, King Philip’s War. It predates by many years the Bloody Brook Monument (see Other Nearby Markers, above). But it had been moved so many times that in 1835, when construction started on that structure, the town formed a committee to identify the precise location of the mass grave. “Guided by ‘tradition and some aged people’ the committee located the spot,” Schultz and Tougias note.