The Decline of the Jewish Community of Gerolzhofen from January 30, 1933 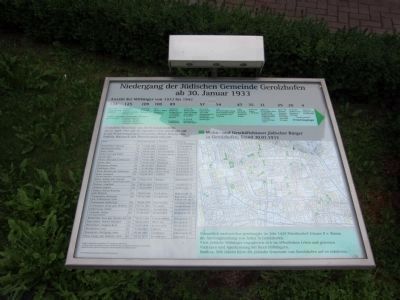 By Andrew Ruppenstein, July 18, 2012
1. The Decline of the Jewish Community of Gerolzhofen from January 30, 1933 Marker
The marker consists of four parts. The actual text, in the green field in lower right corner, is transcribed in German and translated into English just to the left of this picture. The upper portion of the marker consists of a timeline noting various events from 1933 to 1942, along with the number of remaining Jews. The lower left of the marker lists the community's remaining Jews, who were sent to concentration camps in 1942. The lower right side of the marker shows a map depicting the location (in green) of the businesses and homes of the city's Jewish citizens in January 1933. Each of these parts are discussed below.
Inscription.
The Decline of the Jewish Community of Gerolzhofen from January 30, 1933. Niedergang der Jüdische Gemeinde Gerolzhofen ab 30. Januar 1933. , [Marker text in German:] , Urkundlich nachweisbar genehmigte im Jahr 1425 Fürstbischof Johann II v. Brunn die Ansässigmachung von Juden in Gerolzhofen. Viele jüdische Mitbürger engagierten sich im öffentlichen Leben und genossen Vertrauen und Anerkennung bei Ihren Mitbürgern. Nach ca. 500 Jahren horte die jüdische Gemeinde von Gerolzhofen auf zu existieren., [Marker text translated into English, more or less:] , The first known mention of the presence of Jews in Gerolzhofen is the residential permission granted to them by Prince Bishop Johann II von Brunn in 1425. Many Jewish citizens engaged in public life and enjoyed the trust and recognition of their fellow citizens. After approximately 500 years, the Jewish Community of Gerolzhofen ceased to exist. . This historical marker was erected in 2007 by City of Gerolzhofen. It is in Gerolzhofen in Landkreis Schweinfurt Bavaria Germany

[Marker text translated into English, more or less:]
The first known mention of the presence of Jews in Gerolzhofen is the residential permission granted to them by Prince Bishop Johann II von Brunn in 1425. Many Jewish citizens engaged in public life and enjoyed the trust and recognition of their fellow citizens. After approximately 500 years, the Jewish Community of Gerolzhofen ceased to exist.

Erected 2007 by City of Gerolzhofen.

Topics. This historical marker is listed in these topic lists: Civil Rights • Notable Events • War, World II. A significant historical year for this entry is 1425.

By Andrew Ruppenstein, July 18, 2012
2. The Decline of ... Marker - main text
The marker text (see above) traces the appearance and disappearance of the city's Jewish community in only 3 sentences.

Click or scan to see
this page online
, in Landkreis Schweinfurt. Marker is at the intersection of Schuhstrasse and Steingrabenstrasse, on the left when traveling west on Schuhstrasse. Touch for map. Marker is in this post office area: Gerolzhofen, Bavaria 97447, Germany. Touch for directions.

Regarding The Decline of the Jewish Community of Gerolzhofen from January 30, 1933.

• Although the marker indicates 1425 as the first known documentary mention of Jews in Gerolzhofen, Allemania-Judaica.de notes several other earlier mentions.

• The Machtergreifung, or "seizure of power" mentioned on the timeline, occurred on January 30, 1933, and began the conversion of Germany from a democracy to a dictatorship. Some have noted that the term itself is somewhat deficient, as it obscures both popular support and the ostensible legality of what is now also termed a "transfer of power". (Machtübernahme).

By Andrew Ruppenstein, July 18, 2012
3. The Decline of ... Marker - timeline showing the decline in the numbers of Jews
The timeline begins on January 30, 1933, with the installation of Adolf Hitler (Machtergreifung) as Chancellor, when Gerolzhofen contained 134 Jews (out of a population of perhaps 2,000 or more). With the onset of the Nuremberg Race Laws (Nuernberger Rassengesetze) on September 15, 1935, the Jewish population was down to 109. At the time of the "Aryanization" and expropriation of Jewish businesses (Ariesierung, Enteignung), their number had decreased to 89. By the time of Pogromnacht (or Kristallnacht, the "Night of Broken Glass") on November 9-10, 1938, 57 Jews remained in Gerolzhofen. On September 19, 1942, the city's 4 remaining Jews were deported to Theresienstadt (a concentration camp, now located in the Czech Republic). [Click on picture to enlarge.]
the Nuremberg Race Laws (mentioned on the timeline), were a set of statutes classifying Jewishness according to a person's grandparents. Defining "Jewishness" made possible the execution of the discriminatory laws that the Nazis had enacted to deprive Jews of their rights.

• Pogromnacht (mentioned in the timeline), also commonly known as Kristallnacht or "Night of Broken Glass" was the series of violent coordinated actions taken by the Nazis on November 9-10, 1938 against the Jews in Germany and Austria. Over 1,000 synagogues were burned, homes and businesses were ransacked, and more than 90 Jews were killed, and additional 30,000 were arrested and taken into custody. In Gerolzhofen, about 40 Nazis ransacked the synagogue, taking the contents to the nearby sports field to burn.

• The lower left of the marker indicates that the sources of its contents were provided by Dr. Stephan Oetterman of the Gerolzhofen City Archives, Martin Frey, Jesko Graf zu Dohna, and Michael Pfrang. It was created in 2006 by Evamarie Bräuer and commissioned by the City of Gerolzhofen.


Also see . . .
1. Image of Marker. Alemannia-Judaica.de provides a pdf version of the marker, making it much easier to read than the photos provided here. (Submitted on August 31, 2012.) 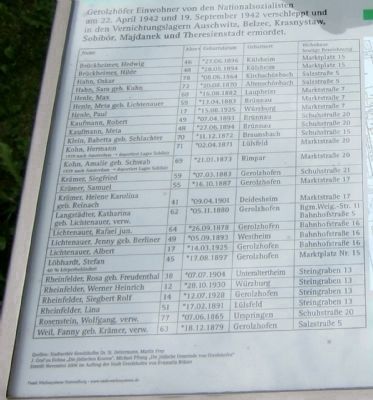 By Andrew Ruppenstein, July 18, 2012
4. The Decline of ... Marker - list of persons sent to concentration camps
The caption above the list reads: Gerolzhofen residents transported by the Nazis on April 22, 1942 and September 19, 1942 and murdered in the concentration camps of Auschwitz, Belzec, Krasnystaw, Sobibor, Madjanek and Theresienstadt. Twenty-six persons are listed, along with their ages, places of birth, and addresses. The youngest, Werner Rheinfelder, was age 12, while the oldest, Oskar Hahn, was 78.
of text and links relating to the history of Jews in Gerolzhofen. Includes numerous synopses of contemporaneous newpaper articles depicting Jewish life in Gerolzhofen during the 19th and 20th century. At the bottom of the page a short English-language summary is provided, reading: Gerolzhofen Lower Franconia. Jews were victims of the Rindfleisch massacres of 1298. The modern community dates from the first half of the 17th century, with a cemetery consecrated in 1639 serving seven other communities as well. A new synagogue was built in 1874. The Jewish population reached a peak of 148 in 1900 (total 2,163) and numbered 125 in 1933. On Kristallnacht (9-10 November 1938), Jews were beaten and arrested and their homes wrecked along with the synagogue. In 1933-41, 61 Jews emigrated from Germany, 39 of them to the United States. Another 35 left for other German cities. On 25 April 1942, 19 Jews were deported to Izbica near Lublin via Wuerzburg; another six were sent to the Theresienstadt ghetto in September. (Submitted on September 1, 2012.) 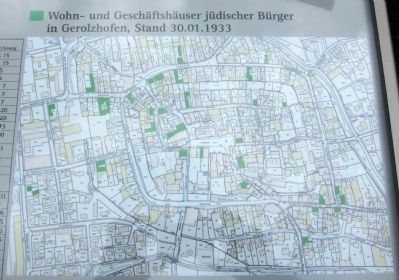 By Andrew Ruppenstein, July 18, 2012
5. The Decline of ... Marker - map of Jewish homes and businesses as of January 30, 1933
The marker location on this map would be among the green cluster in the lower right quadrant. The Community's synagogue was also located in this area, just up the street from the marker location. By Andrew Ruppenstein, July 18, 2012
6. Memorial for the Jews of Gerolzhofen
The marker stands next to stone memorial inscribed: Die Stadt gedenkt ihrer ehemaligen jüdischen Mitbürger. Zur Erinnerung und Mahnung. - The city commemorates her former Jewish co-citizens. To their memory. The memorial was installed in 1988.

An addition to the memorial was made in 2007, with the installation of a ground plaque reading in Hebrew " ,שלום שלום לרחוק וקרוב!" and German, "Friede, Friede den Fernen und Nahen!" - Peace, Peace to near and far! 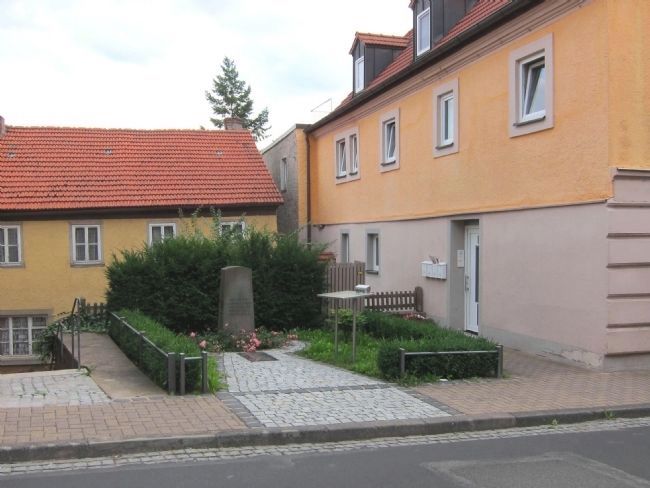