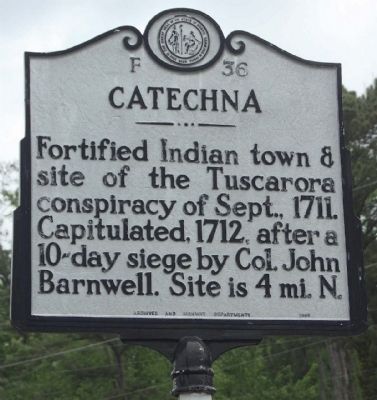 Photographed By Mike Stroud, April 19, 2013
1. Catechna Marker
Inscription.
Catechna. . Fortified Indian town and site of the Tuscarora conspiracy of Sept., 1711. Capitulated, 1712, after a 10-day siege by Col. John Barnwell. Site is 4 mi. N. . This historical marker was erected in 1966 by Archives and Highway Departments. It is in Grifton in Pitt County North Carolina

Topics and series. This historical marker is listed in these topic lists: Colonial Era • Native Americans • Settlements & Settlers • Wars, US Indian. In addition, it is included in the North Carolina Division of Archives and History series list. A significant historical year for this entry is 1711.

Other nearby markers. At least 8 other markers are within 9 miles of this marker, measured as the crow flies. John Lawson (here, next to this marker); Blount Hall (approx. 1½ miles away); Burney Place (approx. 4½ miles away); Scuffleton Bridge (approx. 6.2 miles away); Washington's Southern Tour 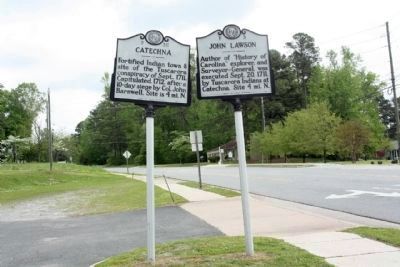 Click or scan to see
this page online
(approx. 6.6 miles away); Former Colleges (approx. 6.7 miles away); Tower Hill (approx. 7.3 miles away); a different marker also named Washington's Southern Tour (approx. 8.2 miles away). Touch for a list and map of all markers in Grifton.

Regarding Catechna. European colonists encroached on Native American lands as the colony of North Carolina grew; consequently tensions escalated between the two groups. In 1711, the Tuscarora, who controlled most of the land between the Neuse River and Roanoke River began a war with the colonists. In September of that year, the Tuscarora captured and killed John Lawson, whom they believed was the governor.
Lawson’s capture signaled the beginning of a three-day rampage that left at least 120 colonists dead in
Bath and the surrounding countryside. Men, women and children were killed and their bodies mutilated
throughout the region. Houses, stock, and barns were destroyed.
Colonial leaders failed to formulate a strategy for protection and, instead, sent pleas for assistance to
Virginia and South Carolina. In response, South Carolina sent Colonel John Barnwell fortified with white militia and a large army of Native American allies from the Yamassee tribe that were hostile to the Tuscarora. Upon his arrival in January, 1712, Barnwell expected reinforcements from North Carolina but received little assistance. Barnwell first attacked a network of farms known as Torhunta in modern Wayne County. Barnwell destroyed all of the forts and villages in the region before leaving the area.
Barnwell continued his trek through North Carolina in efforts to put an end to Tuscarora strength and opposition. His next big target was Catechna, an important Tuscarora town where the conspiracy to
attack the colonists was formulated in 1711. The town was situated near the junction of the Neuse River and Contentnea Creek. The town was abandoned by the time of Barnwell’s arrival; Indians had retreated to a well fortified position across the river. During the attack in March 1712, Barnwell encountered well armed warriors who were prepared to fight to the death. During the fight to take the fort, Barnwell’s troops heard the screams of tortured colonists inside the fort. Barnwell demanded the torture to stop and the warriors demanded that he cease his attack. Barnwell was forced to call a truce at this battle and drew back and constructed his own fort nearby. He laid siege to Catechna again the following month for ten days and accepted the surrender of the warriors inside the fort instead of killing them. Many in the colony disagreed with his actions and Barnwell left the colony in disarray later in 1712 as Native Americans continued to attack colonists.
North Carolina again appealed to South Carolina and another force under the command of Colonel James Moore entered the colony. Moore, commanding South Carolina militia, North Carolina militia and allied Native Americans, soundly defeated warriors at Fort Nooherooka in March, 1713. By the end of the Tuscarora War, approximately 200 whites and 1000 natives were killed with about 1000 Tuscarora sold into slavery and over 3000 forced from their homes, many eventually migrating northward to Pennsylvania and New York. With the threat of violence from hostile Native Americans removed, white colonists flooded into the backcountry and extended the frontier farther west. (North Carolina Office of Archives & History — Department of Cultural Resources)
Credits. This page was last revised on July 1, 2021. It was originally submitted on May 13, 2013, by Mike Stroud of Bluffton, South Carolina. This page has been viewed 730 times since then and 81 times this year. Photos:   1, 2. submitted on May 13, 2013, by Mike Stroud of Bluffton, South Carolina.
Share this page.