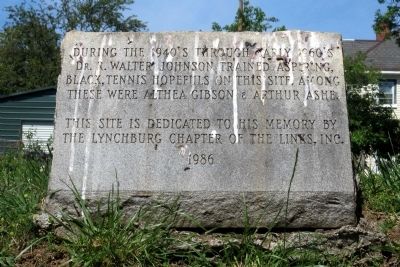 By Bernard Fisher, May 26, 2014
1. Site of Dr. Johnson's Tennis Court Marker
Inscription.
Site of Dr. Johnson's Tennis Court. . During the 1940's through early 1960's Dr. R. Walter Johnson trained aspiring, black, tennis hopefuls on this site. Among these were Althea Gibson and Arthur Ashe. . This historical marker was erected in 1986 by Lynchburg Chapter of the Links, Inc.. It is in Lynchburg Virginia

During the 1940's through early 1960's Dr. R. Walter Johnson trained aspiring, black, tennis hopefuls on this site. Among these were Althea Gibson & Arthur Ashe.

Erected 1986 by Lynchburg Chapter of the Links, Inc. 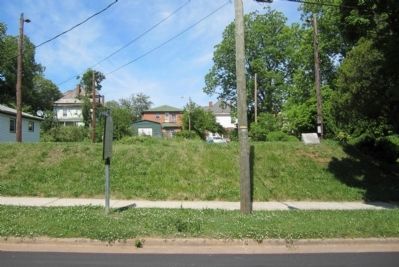 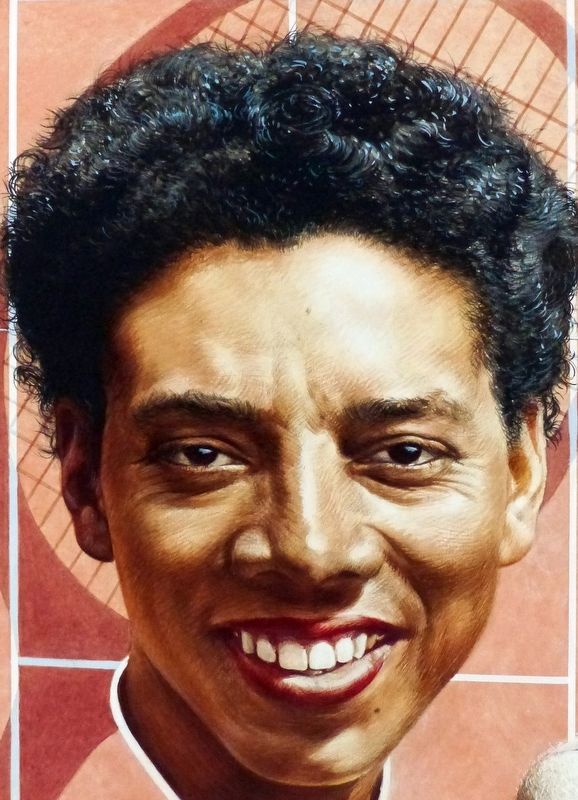 By Allen C. Browne, July 25, 2017
3. Althea Gibson, 1927-2003
This 1957 watercolor portrait of Althea Gibson by Boris Chaliapin, for the cover of Time Magazine, hangs in the National Portrait Gallery in Washington, DC.

“In 1955, Althea Gibson contemplated retiring from competitive tennis. Had she done so, she would have denied herself her greatest moment. Two years later, this ‘lanky jumping jack of a girl,’ who had begun her sports career playing paddle tennis in New York's Harlem, was arriving home from England, the winner of the women's singles and doubles titles at the prestigious Wimbledon championships. Within another two months, she had won the U.S. women's singles crown at Forest Hills, New York, and emerged triumphant as America's clay court champion as well. ‘Althea Gibson,’ reported Time magazine in its cover story for August 26, 1957, ‘is not the most graceful figure on the courts, and her game is not stylish.&rsqou Nevertheless, it was clear that at thirty an age when most tennis players lose their competitive edge she was only then hitting her stride.” -- National Portrait Gallery 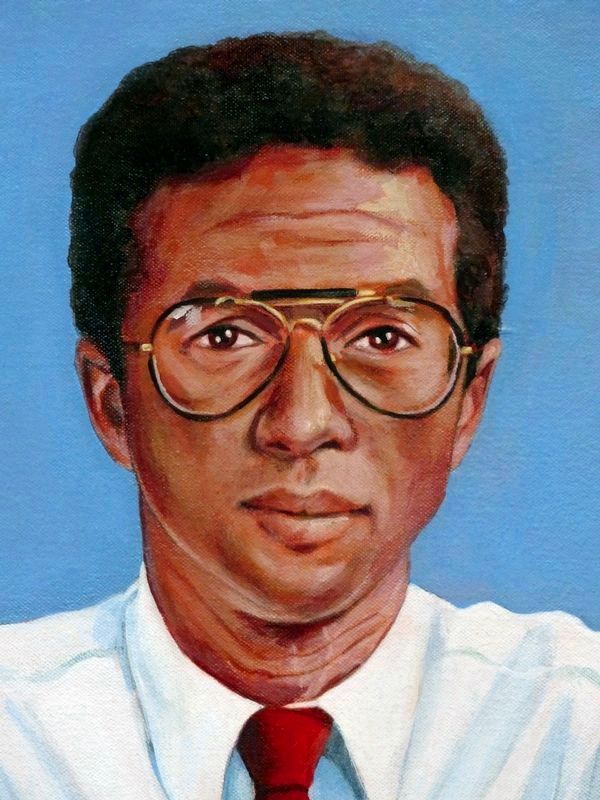 “Armed with superb natural talent, a keen competitive spirit, and poise that set him apart from his rivals, Arthur Ashe made his way from the segregated playground courts of his youth to the pinnacle of the tennis world. Rated among the world's top ten players while still in college, Ashe reached the number-one ranking in spectacular fashion in 1968. After capturing the U.S. amateur title, he served an astonishing twenty-six aces in the final to become the first African American man to claim the U.S. Open championship. Ashe went on to record multiple tournament victories, including his memorable triumph over Jimmy Connors at Wimbledon in 1975. Following a heart attack that forced his retirement in 1980, Ashe dedicated his energies to humanitarian causes. He became a leader in the fight against AIDS in 1992, after revealing that he had contracted the virus through a transfusion.” — National Portrait Gallery
Credits. This page was last revised on April 17, 2020. It was originally submitted on May 27, 2014, by Bernard Fisher of Richmond, Virginia. This page has been viewed 607 times since then and 22 times this year. Photos:   1, 2. submitted on May 27, 2014, by Bernard Fisher of Richmond, Virginia.   3, 4. submitted on September 19, 2017, by Allen C. Browne of Silver Spring, Maryland.
Share this page.