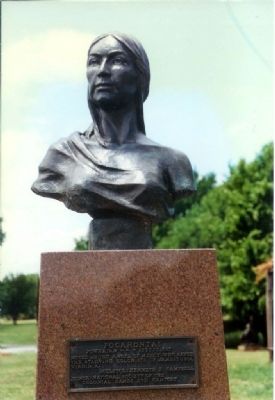 By Mike Stroud, June 1996
1. Pocahontas Marker
Inscription.
Pocahontas. .
Powhatan --- 1595 to 1617. Noted as the Angel of Mercy who saved the starving colonists of Jamestown, Virginia Sculptor: Kenneth F. Campbell Donor: National Society of the Colonial Dames XVII Century . This historical marker was erected by National Hall Of Fame For Famous American Indians. It is in Anadarko in Caddo County Oklahoma

Powhatan --- 1595 to 1617
Noted as the Angel of Mercy who saved the starving colonists of Jamestown, Virginia
Sculptor: Kenneth F. Campbell
Donor: National Society of the Colonial Dames XVII Century

Erected by National Hall Of Fame For Famous American Indians.

Topics. This historical marker is listed in these topic lists: Colonial Era • Native Americans • Settlements & Settlers • Women. A significant historical year for this entry is 1595.

By James Hulse, September 9, 2021
2. The Pocahontas Marker at the entrance to the park

More about this marker. Found at National Hall Of Fame For Famous American Indians

Regarding Pocahontas. The National Hall of Fame of Famous American Indians was established to recognize famous American Indians. It was a chance to provide a portrait in a bronze bust, a three dimensional likeness, for visitors to touch and see famous people they have read about in history books. Formed in 1952 by historians and people interested in history, there are now 41 busts in the Hall of Fame, an outdoor garden with a sidewalk that is about three quarters of a mile long passing each bust. The busts have been sculpted by famous artists. Along with the names of each of the Hall of Famers is a short history of the person. A self-guiding tabloid with a short biography of each bust is furnished at the visitor center.

Many times Ta-hau-san, Satanta, Quanah Parker, Jose Maria, Black Beaver, Kickingbird, Ahpeahtone, and maybe Geronimo, as well as others, rode their horses over the grounds of the Hall of Fame many years ago. Several families come to wash their family member's bust and say a few

By James Hulse, September 9, 2021
3. The Pocahontas Marker is the second marker from the right near the entrance
prayers.

Also see . . .  Wikipedia entry for Pocahontas. During a time when the colonists were starving, "ever once in four or five days, Pocahontas with her attendants brought him [Smith] so much provision that saved many of their lives that else for all this had starved with hunger." (Submitted on May 5, 2008, by Mike Stroud of Bluffton, South Carolina.) 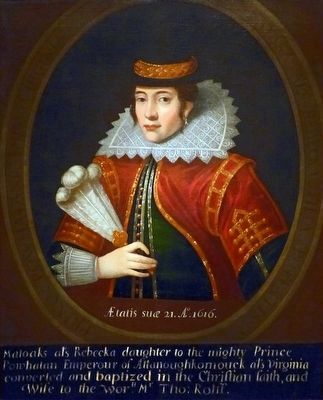 By Allen C. Browne, February 16, 2015
4. Pocahontas, age 21, 1616
This portrait of Pocahontas (Matoaks) after a 1616 engraving by Simon van de Passe hangs in the National Portrait Gallery in Washington DC.

Matoaks als Rebecka daughter to the mighty Prince Powhatan Emperour of Attanoughkomouck als Virginia converted and baptized in the Chriƒtian faith, and Wife to the worʰ. Mr Tho: Rolff.

“Pocahontas, the Indian princess who allegedly saved the life of English colonist John Smith, survives and flourishes as an example of an early American heroine. While Smith may have embellished the story of his rescue, the importance of Pocahontas to relations between colonists and Native Americans is undisputed. Following her conversion to Christianity and marriage to Englishman John Rolfe, Pocahontas journeyed to England with her family to demonstrate the ability of new settlers and native tribes to coexist in the Virginia colony. While in England, Pocahontas sat for her portrait, which was later engraved. That print served as the basis for this later portrait. The painter included an inscription beneath the likeness, copied from the engraving, but through an error in transcription it misidentifies her husband as Thomas, the name given to their son.” — National Portrait Gallery
Credits. This page was last revised on September 17, 2021. It was originally submitted on May 5, 2008, by Mike Stroud of Bluffton, South Carolina. This page has been viewed 2,242 times since then and 2 times this year. Photos:   1. submitted on May 5, 2008, by Mike Stroud of Bluffton, South Carolina.   2, 3. submitted on September 17, 2021, by James Hulse of Medina, Texas.   4. submitted on October 26, 2015, by Allen C. Browne of Silver Spring, Maryland. • Kevin W. was the editor who published this page.
Share this page.