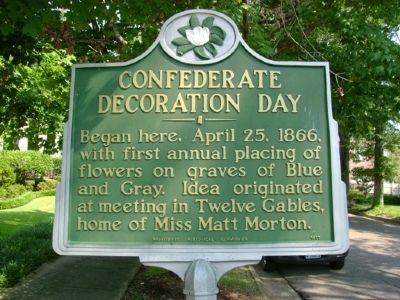 Topics and series. This historical marker is listed in these topic lists: Cemeteries & Burial Sites • Notable Events • War, US Civil. In addition, it is included in the Mississippi State Historical Marker Program series list. 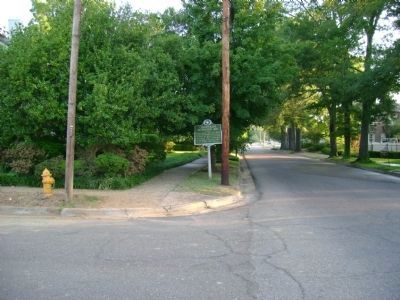 Regarding Confederate Decoration Day. The legend goes that in 1866 a group of women from Columbus, Mississippi, went to the local cemetery to decorate Confederate graves. They noticed some graves in the corner of the cemetery that were unadorned. After they placed flowers on those markers, someone pointed out that those were Yankee graves. One of the women responded “We are sure there are mothers, sister, wives, or sweethearts who are mourning these dead men, so we are going to honor them also.”

Many of the Southern States adopted their own dates of remembrance for their beloved Confederate Soldiers. Several of those dates revolve around a specific event in Southern history. Mississippi honors its Confederate heroes on the last Monday in April.

Also see . . .  The Library of Congress - Today in History: May 30. When a women's memorial association in Columbus, Mississippi, decorated the graves of both Confederate and 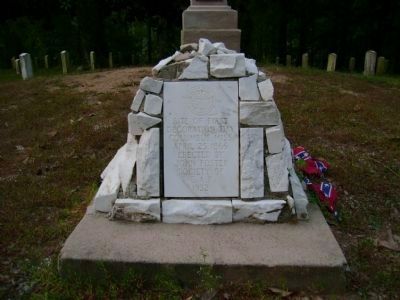 By Davis Darryl Hartness, August 26, 2007
3. Confederate Decoration Day Marker
This monument is in Friendship Cemetery. The inscription reads “Site of first Decoration Day, Columbus, Miss. April 25, 1866. Erected by John foster Society of C. A. R., 1932.” C.A.R. are initials for Children of the American Revolution.
Union soldiers on April 25, 1866, this act of generosity and reconciliation prompted an editorial piece, published by Horace Greeley's New York Tribune, and a poem by Francis Miles Finch, "The Blue and the Grey," published in the Atlantic Monthly. The practice of strewing flowers on soldiers' graves soon became popular throughout the reunited nation. (Submitted on June 26, 2008, by Kevin W. of Stafford, Virginia.)

Additional comments.
1. The Blue And The Gray
Francis Miles Finch (1827-1907)
Inspired by this event in Columbus, MS.

By the flow of the inland river,
Whence the fleets of iron have fled,
Where the blades of the grave-grass quiver,
Asleep are the ranks of the dead:
Under the sod and the dew,
Waiting the judgment-day;
Under the one, the Blue,
Under the other, the Gray

These in the robings of glory,
Those in the gloom of defeat,
All with the battle-blood gory,
In the dusk of eternity meet:
Under the sod and the dew,
Waiting the judgement-day
Under the laurel, the Blue,
Under the willow, the Gray.

From the silence of sorrowful hours
The desolate mourners go,
Lovingly 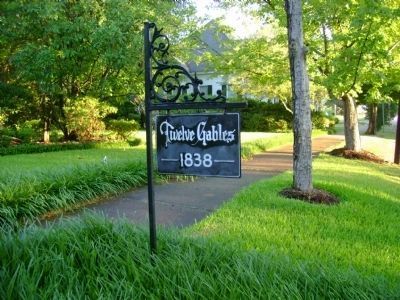 By Davis Darryl Hartness, July 2, 2008
4. Twelve Gables Sign
This is the home where the ladies actually held their meeting for Decoration Day
laden with flowers
Alike for the friend and the foe;
Under the sod and the dew,
Waiting the judgement-day;
Under the roses, the Blue,
Under the lilies, the Gray.

So with an equal splendor,
The morning sun-rays fall,
With a touch impartially tender,
On the blossoms blooming for all:
Under the sod and the dew,
Waiting the judgment-day;
Broidered with gold, the Blue,
Mellowed with gold, the Gray.

Sadly, but not with upbraiding,
The generous deed was done,
In the storm of the years that are fading
No braver battle was won:
Under the sod and the dew,
Waiting the judgment-day;
Under the blossoms, the Blue,
Under the garlands, the Gray

No more shall the war cry sever,
Or the winding rivers be red;
They banish our anger forever
When they laurel the graves of our dead!
Under the sod and the dew,
Waiting the judgment-day,
Love and tears 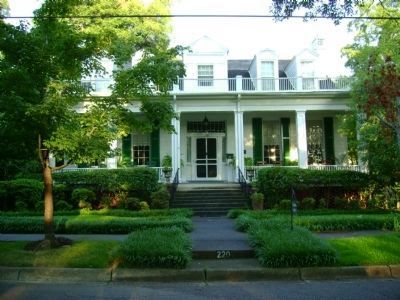