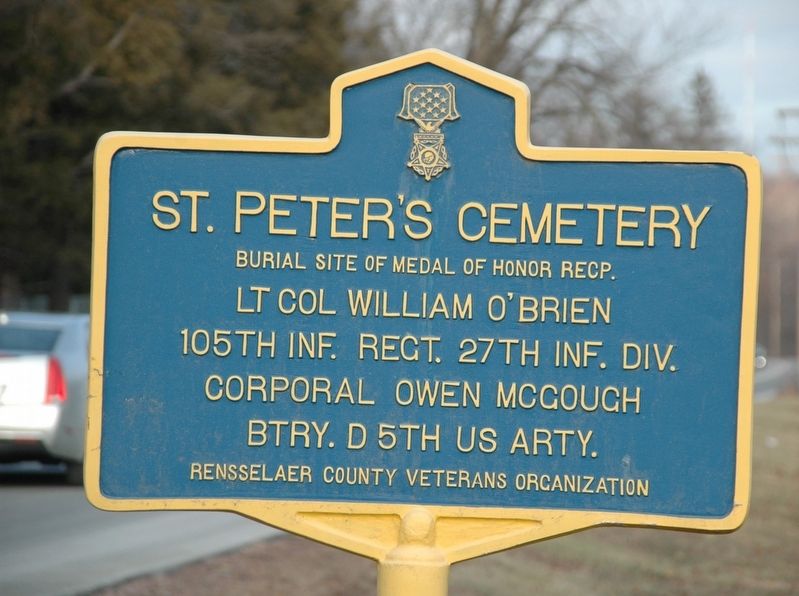 Topics and series. This historical marker is listed in these topic lists: Cemeteries & Burial Sites • War, US Civil • War, World II. In addition, it is included in the Medal of Honor Recipients series list.

Other nearby markers. At least 8 other markers are within walking distance of this marker. George Henry Thomas (about 500 feet away, measured in a direct line); Warren Family Mortuary Chapel: 1861 (about 600 feet away); Third Street Burial Grounds, 1824 (about 700 feet away); William Henry Freeman (approx. 0.2 miles away); Gardner Earl Memorial Chapel & Crematorium 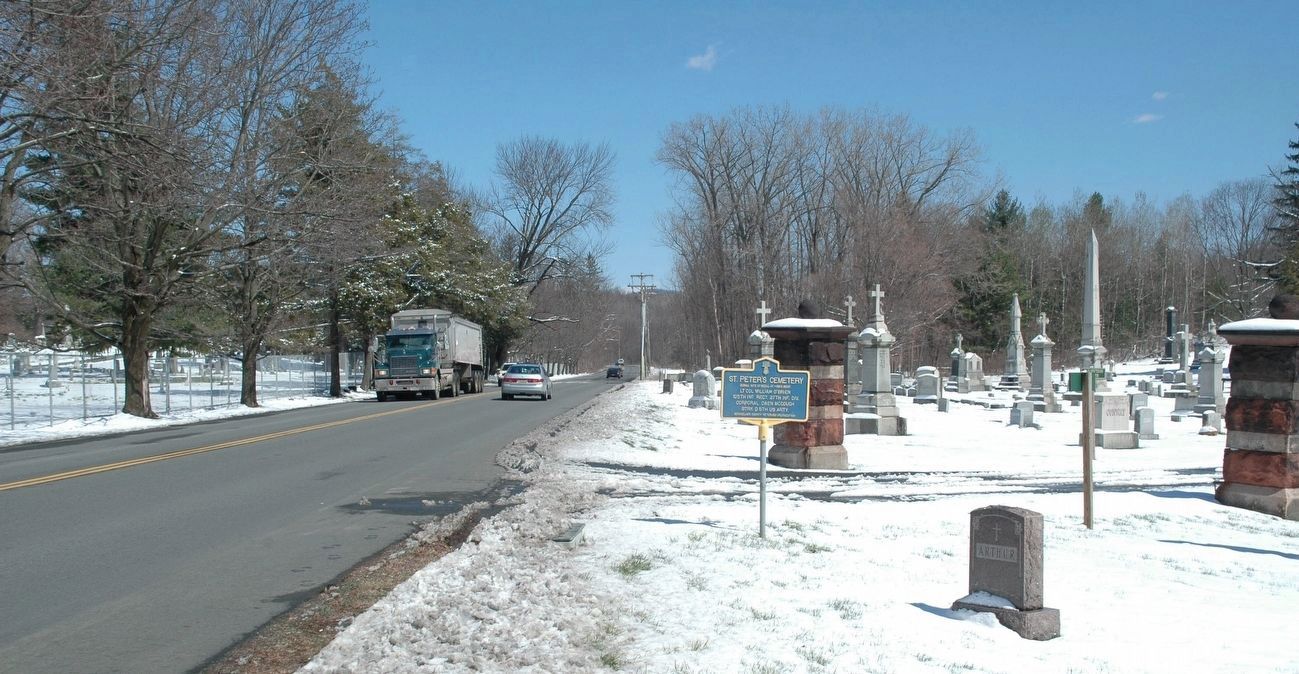 Citation: For conspicuous gallantry and intrepidity at the risk of his life above and beyond the call of duty at Saipan, Marianas Islands, from 20 June through 7 July 1944. When assault elements of his platoon were held up by intense enemy fire, Lt. Col. O'Brien ordered 3 tanks to precede the assault companies in an attempt to knock out the strongpoint. Due to direct enemy fire the tanks' turrets were closed, causing the tanks to lose direction and to fire into our own troops. Lt. Col. O'Brien, with complete disregard for his own safety, dashed into full view of the enemy and ran to the leader's tank, and pounded 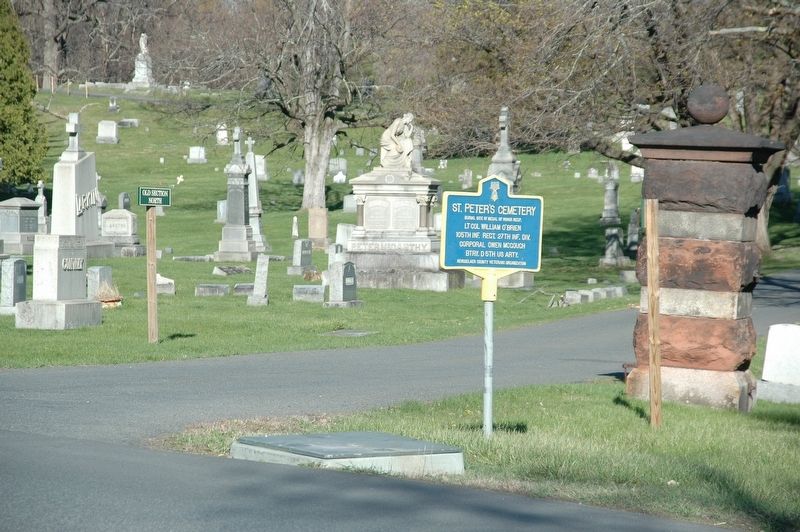 Photographed By Howard C. Ohlhous, April 20, 2016
3. St. Peter's Cemetery & Marker
on the tank with his pistol butt to attract 2 of the tank's crew and, mounting the tank fully exposed to enemy fire, Lt. Col. O'Brien personally directed the assault until the enemy strongpoint had been liquidated. On 28 June 1944, while his platoon was attempting to take a bitterly defended high ridge in the vicinity of Donnay, Lt. Col. O'Brien arranged to capture the ridge by a double envelopment movement of 2 large combat battalions. He personally took control of the maneuver. Lt. Col. O'Brien crossed 1,200 yards of sniper-infested underbrush alone to arrive at a point where 1 of his platoons was being held up by the enemy. Leaving some men to contain the enemy he personally led 4 men into a narrow ravine behind, and killed or drove off all the Japanese manning that strongpoint. In this action he captured 5 machineguns and one 77-mm. fieldpiece. Lt. Col. O'Brien then organized the 2 platoons for night defense and against repeated counterattacks directed them. Meanwhile he managed to hold ground. On 7 July 1944 his battalion and another battalion were attacked by an overwhelming enemy force estimated at between 3,000 and 5,000 Japanese. With bloody hand-to-hand fighting in progress everywhere, their forward positions were finally overrun by the sheer weight of the enemy numbers. With many casualties and ammunition running low, Lt. Col. O'Brien refused to leave the front lines. 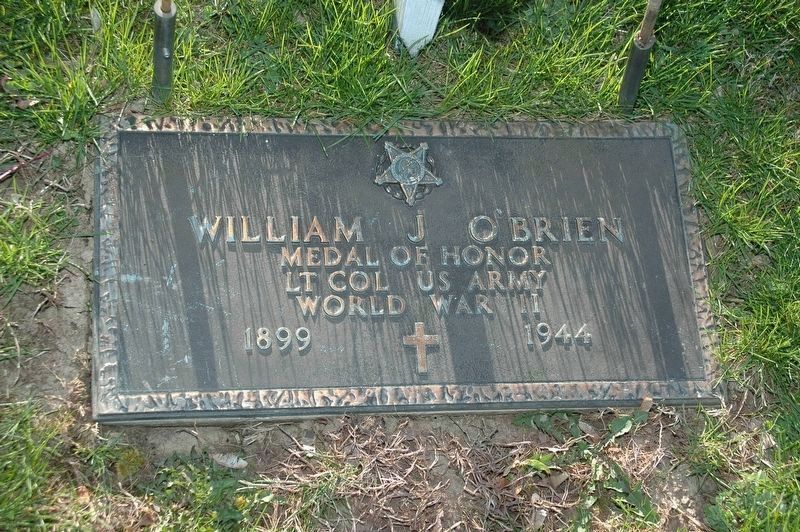 Photographed By Howard C. Ohlhous, April 20, 2016
4. William J O'Brien
Medal of Honor
Lt Col US Army
World War II
1899 1944
Striding up and down the lines, he fired at the enemy with a pistol in each hand and his presence there bolstered the spirits of the men, encouraged them in their fight and sustained them in their heroic stand. Even after he was seriously wounded, Lt. Col. O'Brien refused to be evacuated and after his pistol ammunition was exhausted, he manned a .50 caliber machinegun, mounted on a jeep, and continued firing. When last seen alive he was standing upright firing into the Jap hordes that were then enveloping him. Some time later his body was found surrounded by enemy he had killed His valor was consistent with the highest traditions of the service.

Citation: Through his personal exertions under a heavy fire, one of the guns of his battery was brought off the field; all the other guns were lost. 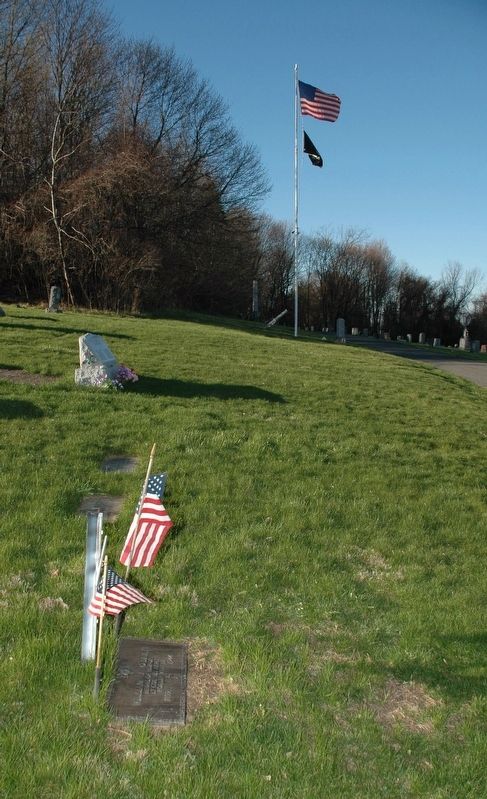 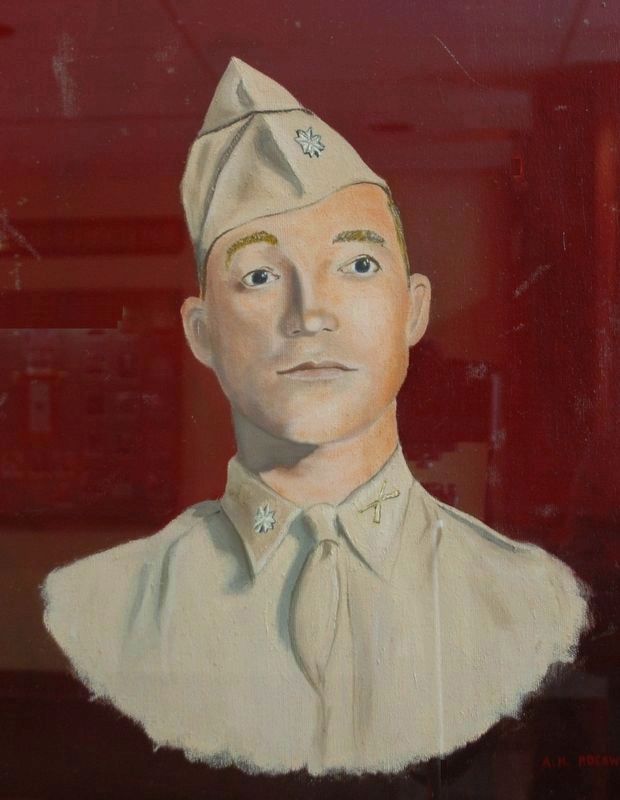 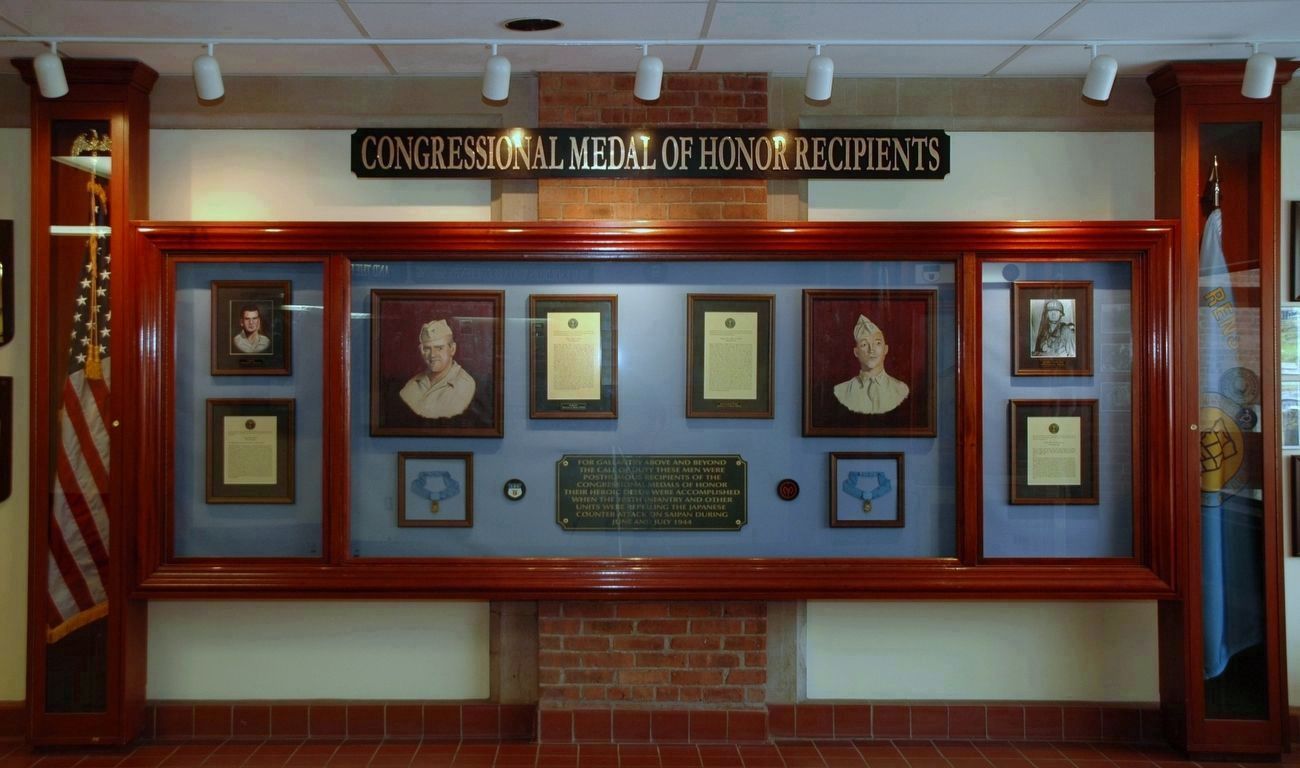 Photographed By Howard C. Ohlhous, April 21, 2016
7. Congressional Medal of Honor Recipients
In 2009 the Rensselaer County Legislature honored two Medal of Honor recipients from the county with a permanent memorial, seen here on display in the third-floor lobby of the Rensselaer County office building on Seventh Avenue in Troy. The memorial honors Lt. Col. William O'Brien and Sgt. Thomas Baker, both from Troy. They died within hours of each other during the World War II battle for Saipan on July 7, 1944. O'Brien's section is on the right of the display. 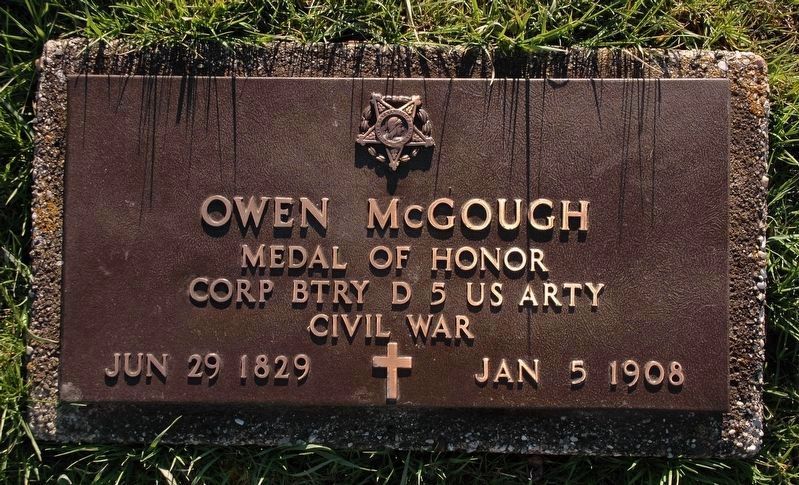 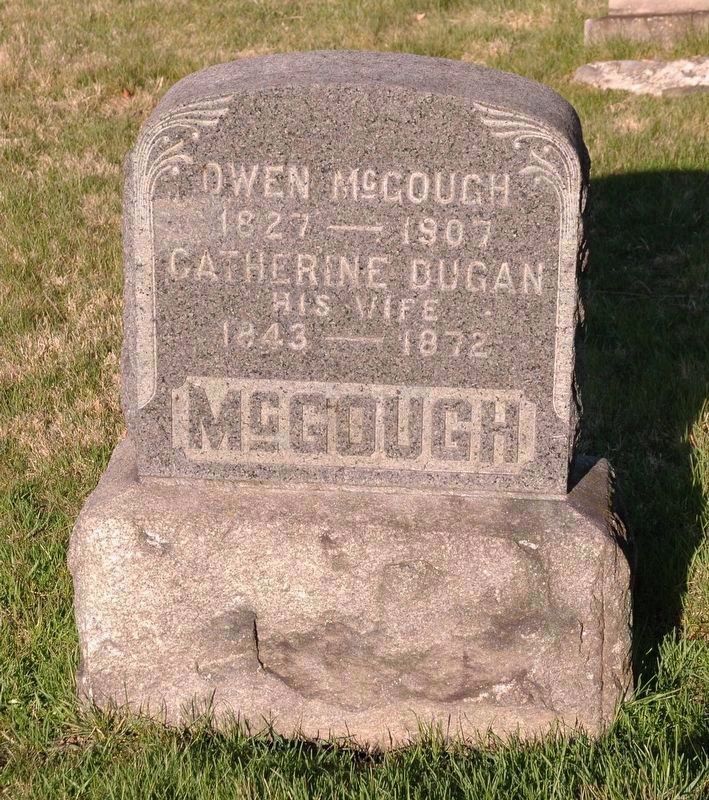